Unrest in the Middle East 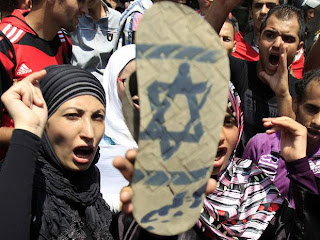 Almasry Alyoum
Wed, 24/08/2011 - 12:32
Protesters demonstrating at the Israeli Embassy in Cairo called on Tuesday for a million-man protest Friday to demand the expulsion of the Israeli ambassador.
Protests at the embassy began in response to an Israeli border raid Thursday that killed six Egyptian soldiers and border security officials.
Israel launched the raid in response to an attack, apparently carried out by militants who crossed the border from Sinai, that killed eight Israelis in Eilat.
The number of protesters decreased Tuesday, the fifth day of the protests. But the April 6 Youth Movement has announced it will continue its open-ended sit-in at the embassy.
Other demonstrators protested outside Israeli ambassador's home in Maadi for the third consecutive day amid calls to stage a sit-in at his house to force him to leave Egypt.
The official Egyptian response to the killings sparked anger among several local political parties and movements who perceive it as weak.
Translated from the Arabic Edition
Posted by seemorerocks at 18:15