Is The Next Domino To Fall.... Canada?
While two short months ago, "nobody" had any idea that Italy's banks were on the verge of insolvency, despite that the information was staring them in the face (or was being explicitly cautioned at by Zero Hedge days before Italian CDS blew out and Intesa became the whipping boy of the evil shorts), by now this is common knowledge and is the direct reason for why the FTSE MIB has two choices on a daily basis: break... or halt constituent stocks indefinitely.
That this weakness is now spreading to France and other European countries is also all too clear. After all, if one were to be told that a bank has a Tangible Common Equity ratio of under 2%, the logical response would be that said bank is a goner. Yet both Credit Agricole and Deutsche Bank are precisely there (1.41% and 1.92% respectively), and both happen to have total "assets" which amount to roughly the size of their host country GDPs, ergo why Europe can not allow its insolvent banks to face reality or the world would end (at least in the immortal stuttered words of one Hank Paulson).
So yes, we know that both French and soon German CDS will be far, far wider as the idiotic market finally grasps what we have been saying for two years: that you can't have your cake and eat it, or said otherwise, that when you onboard corporate risk to the sovereign, someone has to pay the piper. Yet there is one place where that has not happened so far; there is one place that has been very much insulated from the whipping of the market, and one place where banks are potentially in just as bad a shape as anywhere else in Europe. That place is.... Canada.
As the chart below shows, which is a ranking of global banks by tangible common equity, lowest first, of the banks with a TCE ratio of under ~4% a whopping 30% are those situated in Canada, the same place where nobody thinks anything can go wrong, and which has been completely spared from the retribution of the bond vigilantes. Something tells us Canadian sovereign CDS, not to mention Canadian bank CDS, are both about to go quite a bit wider... 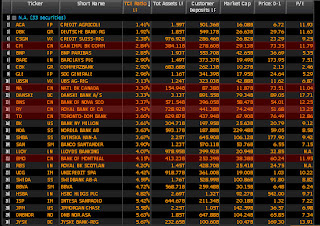