This week Max Keiser and co-host, Stacy Herbert, look at how quantitative easing is good for the rich, bad for the poor and how sterling is offering no refuge. In the second half of the show Max talks to Richard Heinberg, author of The End of Growth, about the role of energy in the current debt crisis.

In their discussion Max and Stacy refer to an article from the Guardian, Quantitative easing 'is good for the rich, bad for the poor'.


Here is the article.

Quantitative easing 'is good for the rich, bad for the poor'
As the Bank of England prepares to vote on quantitative easing, a report argues the extra cash 'exacerbates already extreme income inequality'
the Observer,
Sunday 14 August 2011 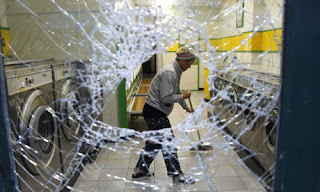 Quantitative easing (QE) – the Bank of England's recession-busting policy of buying up billions of pounds of bonds – may have contributed to social unrest by exacerbating inequality, according to one City economist.
As the Bank of England considers unleashing a fresh round of QE, Dhaval Joshi, of BCA Research, argues the approach of creating electronic money pushes up share prices and profits without feeding through to wages.
"The evidence suggests that QE cash ends up overwhelmingly in profits, thereby exacerbating already extreme income inequality and the consequent social tensions that arise from it," Joshi says in a new report.
He points out that real wages – adjusted for inflation – have fallen in both the US and UK, where QE has been a key tool for boosting growth. In Germany, meanwhile, where there has been no quantitative easing, real wages have risen.
As the Bank waded into the financial markets to spend its £200bn of newly created money, mostly on government bonds, the price of many assets, including shares and commodities such as oil, was driven up.
That helped to boost companies' revenues, but Joshi argues that with the labour market remaining weak, employees have had little hope of bidding up their wages. "The shocking thing is, two years into an ostensible recovery, [UK] workers are actually earning less than at the depth of the recession. Real wages and salaries have fallen by £4bn. Profits are up by £11bn. The spoils of the recovery have been shared in the most unequal of ways."
Joshi adds that this also helps to explain why sales of high-end luxury goods have continued to soar, while many consumers have been forced to tighten their belts.
"High-income earners are more exposed to profits as owners of businesses or shareholders. Low-income earners are dependent on wages," he says.
Joshi's contribution is the latest salvo in a furious row among economists about the effectiveness of QE. Some, including Danny Gabay of consultancy Fathom, have argued that the electronically created money would have been better invested in housing, instead of disappearing into the crisis-hit banking sector.
Adam Posen, the US economist on the Bank's monetary policy committee, has repeatedly voted for a new round of QE, urging his colleagues to agree to spend another £50bn. This month's meeting of the MPC will reveal whether any other members joined him in voting for what the Americans are calling "QEII".
Posted by seemorerocks at 12:37