New York Times
TOKYO — Broad areas around the stricken Fukushima Daiichi nuclear plant could soon be declared uninhabitable, perhaps for decades, after a government survey found radioactive contamination that far exceeded safe levels, several major media outlets said Monday.
The formal announcement, expected from the government in coming days, would be the first official recognition that the March accident could force the long-term depopulation of communities near the plant, an eventuality that scientists and some officials have been warning about for months. Lawmakers said over the weekend — and major newspapers reported Monday — that Prime Minister Naoto Kan was planning to visit Fukushima Prefecture, where the plant is, as early as Saturday to break the news directly to residents. The affected communities are all within 12 miles of the plant, an area that was evacuated immediately after the accident.
The government is expected to tell many of these residents that they will not be permitted to return to their homes for an indefinite period. It will also begin drawing up plans for compensating them by, among other things, renting their now uninhabitable land. While it is unclear if the government would specify how long these living restrictions would remain in place, news reports indicated it could be decades. That has been the case for areas around the Chernobyl plant in Ukraine after its 1986 accident.
Since the Fukushima accident, evacuations have been a sensitive topic for the government, which has been criticized for being slow to admit the extent of the disaster and trying to limit the size of the areas affected, despite possible risks to public health. Until now, Tokyo had been saying it would lift the current evacuation orders for most areas around the plant early next year, when workers are expected to stabilize Fukushima Daiichi’s damaged nuclear reactors.
The government was apparently forced to alter its plans after the survey by the Ministry of Science and Education, released over the weekend, which showed even higher than expected radiation levels within the 12-mile evacuation zone around the plant. The most heavily contaminated spot was in the town of Okuma about two miles southwest of the plant, where someone living for a year would be exposed to 508.1 millisieverts of radiation — far above the level of 20 millesieverts per year that the government considers safe.
The survey found radiation above the safe level at three dozen spots up to 12 miles from the plant. That has called into question how many residents will actually be able to return to their homes even after the plant is stabilized.
Some 80,000 people were evacuated from communities around the plant, which was crippled by the magnitude 9.0 earthquake and towering tsunami on March 11. Many of those residents now live in temporary housing or makeshift refugee shelters, and are allowed back to their homes only for brief, tightly supervised visits in which they must wear protective clothing.

This blog highlights how things really are for people in Japan 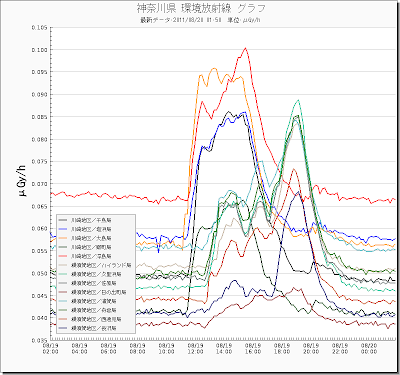 Storm brought fallout to the Kanto area on 8/19/2011.
Since it started to rain,around 11:30AM ,radiation level spiked up around in Tokyo.
Like in Kanagawa,it was 0.055 uSv/h before the rain but it jumped up to 0.095 uSv/h.
This is almost the highest level since April.
This rain is highly likely to contain cesium,which caused the spike up.
0.095 uSv/h isn’t the problem.Hot particles coming out of the rain water when it’s dry matters when we breathe it to our lung.
In Kanto area,nobody should touch the rain either. Especially cesium is absorbed from hair too.
The night before the day,8/18/2011 22:00~23:00,massive steam splashed from Fukushima plants too.
and the wind blew from north on 8/19. It is rational to think the steam came to Tokyo.
On the internet,our grass rooted community had a consensus that the account called “Happy”is a whistle-blower of Tepco.but we are starting to suspect it recently since he has been commenting the “steam” is a harmful rumor.
Now the steam and smoke is observed even on the Fukuichi camera.
Probably,radioactive steam is splashing out of the cracks in the ground actually.
Fallout will affect our tap water in 2~3 days from now.
Can’t we escape from the endless hell..
http://www.fukushima-diary.com
Posted by seemorerocks at 08:48