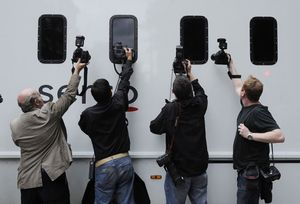 the Independant
Sunday, 28 August 2011
The leader of Britain's prison governors accused magistrates of indulging in a sentencing "feeding frenzy" as prisons near capacity. Eoin McLennan-Murray, president of the Prison Governors Association (PGA), said courts had shown "naked popularism" in meting out tough justice after the riots.
Seven in 10 of those charged with riot-related offences have been remanded in custody, likely to receive a custodial sentence, compared with only one in 10 of those charged with serious offences last year. The PGA warns that if people continue to be put behind bars at such a rate, prisons will be full by mid-September.
For article GO HERE
Posted by seemorerocks at 11:20