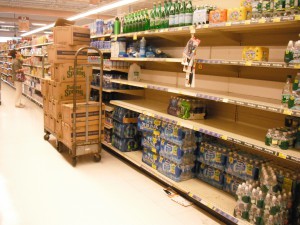 NEW YORK, N.Y.— America’s biggest subway system was ordered shut down as Hurricane Irene bore down Friday, potentially paralyzing movement for millions of carless people even as more than 300,000 were told to evacuate to safer places.
The unprecedented orders, which affect New Yorkers from Manhattan and out to the beaches of Brooklyn and Queens, dealt the congested metropolis a formidable logistical challenge that raised more questions than it resolved:
Where are all of those people in New York’s flood-prone areas supposed to go? And, more pointedly, how are they going to get there — especially since many don’t own a car?
Subways, buses and trains in one of the world’s largest public transportation systems were to stop running at noon Saturday. Bridges and tunnels also could be closed as the storm approaches, clogging traffic in an already congested city.
The five main New York City-area airports were also scheduled to close at noon Saturday for arriving passenger flights. Three of them, John F. Kennedy International Airport, LaGuardia International Airport and Newark Liberty International Airport, are among the busiest airports in the nation.
Officials hoped most residents would stay with family and friends, and for the rest the city opened nearly 100 shelters with a capacity of 71,000 people.
Many people scoffed at the danger and vowed to ride it out at home.
Irene was expected to make landfall in North Carolina on Saturday, then roll up the East Coast reaching New York on Sunday. A hurricane warning was issued for the city Friday afternoon, the first time that’s happened since Gloria.
If the storm stays on its current path, skyscraper windows could shatter, tree limbs would fall and debris would be tossed around. Streets in southern tip of the city could be under a few feet of water, and police readied rescue boats but said they wouldn’t go out if conditions were poor.
Mayor Michael Bloomberg said he was confident people would get out of the storm’s way.
“We do not have the manpower to go door-to-door and drag people out of their homes,” he said. “Nobody’s going to get fined. Nobody’s going to go to jail. But if you don’t follow this, people might die.”
Several New York landmarks were under the evacuation order, including the Battery Park City area, where tourists catch ferries to the Statue of Liberty. Construction was stopping throughout the city, and workers at the site of the World Trade Center were dismantling a crane and securing equipment.

Bloomberg said there would be no effect on the Sept. 11 memorial opening the day after the 10th anniversary of the 2001 terrorist attacks.
Sporting events, concerts and even Broadway were going dark.


Bloomberg weathered criticism after a Dec. 26 storm dumped nearly two feet (0.6 metres) of snow that seemed to catch officials by surprise. Subway trains, buses and ambulances got stuck in the snow, some for hours, and streets were impassable for days. Bloomberg ultimately called it an “inadequate and unacceptable” response.
This time officials weren’t taking any chances. Transit officials said they can’t run once sustained winds reach 62 kph, and they need eight hours to move trains and equipment to safety.
The subway system won’t reopen until at least Monday, after pumps remove water from flooded stations. Even on a dry day, about 200 pump rooms remove up to 56 million litres of water that seeps into the tunnels deep underground.
There are about 1.6 million people in Manhattan and about 6.8 million in the city’s other four boroughs.
Bloomberg warned residents not to be fooled by the sunny weather Friday and said police officers would use loudspeakers on patrol vehicles to spread the word about the evacuation.


At the Red Hook Lobster Pound facing the New York Harbor, owner Ralph Gorham had about $26,000 worth of lobster stored in a refrigerator, plus a tank filled with live crustaceans from Maine. “I’m staying,” he said. “But if we get, say, a few feet of water in here, it’ll be a huge loss.”
For those with cars, parking was available at the city’s evacuation centres. From there, each family will be assigned to a shelter and taken there by bus.
In the Queens community of the Rockaways, more than 111,000 people live on a barrier peninsula connected to the city by two bridges and to Long Island to the west.
The city’s public transit system carries about 5 million passengers on an average weekday, and the entire system has never before been halted because of natural disaster. It was seriously hobbled by an August 2007 rainstorm that disabled or delayed every one of the city’s subway lines. And it was shut down after the 9/11 attacks and during a 2005 strike.
“It’s possible to evacuate without going very far,” said John Nielsen-Gammon, a Texas A&M University meteorologist who has been involved in disaster planning in his role as the state climatologist. “The big wild card for New York is the fact that nobody there is used to a hurricane and can’t rely on common sense or past experience as a guide. And what we learned from evacuations in Houston is that people rely on their friends and their own experience as much as, or more than, they rely on public officials.”
Posted by seemorerocks at 16:23