Martin Weale, a former interest rate hawk, now argues that the Bank of England has 'scope' to unleash more bond-buying 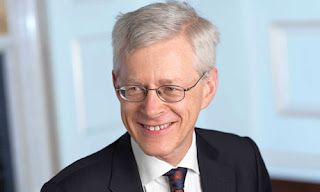 the Guardian,
Thursday 25 August 2011 19.42 BST
Hopes that the Bank of England could unleash a new round of quantitative easing to rescue the ailing economy were boosted on Thursday when a member of its monetary policy committee said there was "undoubtedly scope" to restart the recession-busting policy if necessary.
Martin Weale, who until this month was advocating an increase in interest rates, showed how far his thinking had moved by arguing that the Bank could return to so-called QE if oil prices continued to fall and the sovereign debt crisis in the eurozone worsened.
In a speech to the Doncaster Chamber of Commerce, Weale warned that events on the continent were a greater threat to the UK economy than the slowdown in America, and said: "There is undoubtedly scope for further asset purchases to trigger further reductions in yields on government debt should the need arise."
The Bank has already bought £200bn of assets, mainly government bonds, using electronically created funds to inject money into the economy and drive down interest rates.
For article GO HERE
Posted by seemorerocks at 09:45