Reuters
Thu Aug 25, 2011 5:05pm EDT
Oil terminals, refineries, pipelines and nuclear power plants from the Bahamas to Rhode Island braced for Hurricane Irene on Thursday.
The major Category 3 storm with winds of 115 mph roared through the Bahamas on a path expected to take it up the U.S. East Coast by the weekend.
Unlike a storm in the Gulf of Mexico, an East Coast storm does not threaten significant U.S. crude oil and natural gas production.
For article GO HERE
Eric Cantor: Federal Hurricane Disaster Relief Would Have To Be Offset By Spending Cuts
A very convenient  excuse to bring the cuts they wanted to introduce anyhow - and to introduce fascist measures
Business Insider
Aug. 25, 2011, 4:43 PM
A spokesperson for House Majority Leader Eric Cantor (R-VA) said that if there is any damage caused by Hurricane Irene requiring federal disaster funding, the money would have to be balanced out by spending cuts elsewhere in government.
"We aren't going to speculate on damage before it happens, period," his spokesperson Laena Fallon told TalkingPointsMemo. "But, as you know, Eric has consistently said that additional funds for federal disaster relief ought to be offset with spending cuts."
If the storm causes damage while passing over highly populated areas as predicted, help from the federal government might not be quick in coming.
Already states from North Carolina to New York have declared states of emergency in preparation for the storm.
To see article GO HERE
Fukushima cesium leaks 'equal 168 Hiroshima bombs,' says report

Japan Times
AUG. 26, 2011 - 10:45AM JST
The Japanese government estimates the amount of radioactive cesium-137 released by the Fukushima nuclear disaster so far is equal to that of 168 Hiroshima bombs, a news report said Thursday.
Government nuclear experts, however, said the World War II bomb blast and the accidental reactor meltdowns at Fukushima, which has seen ongoing radiation leaks but no deaths so far, were beyond comparison.
The amount of cesium-137 released since the three reactors were crippled by the March 11 quake and tsunami has been estimated at 15,000 tera becquerels, the Tokyo Shimbun reported, quoting a government calculation.
To see article GO HERE
Russian spacecraft falls from the sky. Is the International Space Station in trouble

Christian Science Monitor
The second embarrassing loss of a Russian space vehicle in a week spells trouble for Russia's space program and its ability to maintain the International Space Station.
An unmanned Russian space freighter, which was launched on a resupply mission to the International Space Station, careened out of control and blew up in a "thunderous fireball" over Siberia Wednesday.
The blast triggering a state of emergency over a wide region and calls into doubt Russia's ability to handle its space obligations in the post-space shuttle era.
"The explosion was so strong that for 100 kilometers glass almost flew out of the windows," Alexander Borisov, an official in the remote and mountainous Altai Republic, on the Mongolian border, where most of the debris from the destroyed Progress spaceship rained down, was quoted by RIA-Novosti as saying.
Russian media reported Thursday that none of the wreckage fell on populated areas, and 40 lumberjacks who'd been working in the affected zone were all safe and accounted for.
But the main casualty may be Russia's ambitious space program, which is the only link to the ISS since last month's final space shuttle mission left NASA without a spacefaring capability.
To see article GO HERE
Bad weather raises concern over future food prices 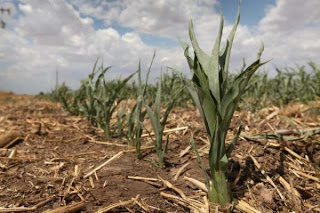 LA Times
Corn futures rose Monday amid speculation that the recent rains in the Midwest won't be enough to ease drought conditions and boost farmers' yields.
Indeed, it has been a brutal year weather-wise for much of the country, particularly for the Midwest and Texas. In the spring there were floods, which made it difficult for farmers to get their crops planted in the ground.
This summer, heat waves have damaged crop fields, and intense droughts in Texas and Oklahoma have resulted in cattle dying and ranchers rushing to sell their animals, even if they took a loss. The extreme weather has raised concerns that a smaller-than-expected supply of corn, soybeans and other core commodity crops might ripple out and keep consumer food prices high in the coming months.
Last month, the U.S. Department of Agriculture cut its forecast for this year’s harvest and predicted that grain inventories, though still hitting record highs, would come in lower than previously expected. Among its estimates: Corn was forecast to hit 12.9 billion bushels, down from previous forecasts of 13.5 billion bushels.
To see article GO HERE
Stocks Fall After Selling Deluge in Germany

This translates as "the derivatives bubble is imploding."
CNBC, Thursday, 25 Aug 2011 | 1:38 PM ET
Right now, "Europe's financial system is insolvent," Scott Minerd, CIO of the diversified financial services firm Guggenheim Partners, told CNBC Thursday.
"If we mark the assets of the European banks to market, the liabilities of the banks exceed the assets well beyond their capital cushion," said Minerd.
"The reality is every solution that's being offered by the policymakers is more and more liquidity, and the reality is this is not a liquidity problem, this is a structural problem," he added. "And the policy makers have done nothing to address the structural issues."
To see article GO HERE
Posted by seemorerocks at 17:17