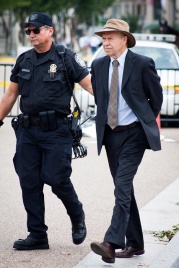 Northern Trumpet
August 30, 2011
One of the nation’s foremost experts on climate change was arrested outside the White House on Monday morning after he joined a protest against a planned Canadian tar sands pipeline, The Raw Story reports.
Dr. James Hansen (pictured), who runs NASA’s Goddard Institute for Space Studies, was arrested along with 139 other protesters taking part in a series of demonstrations against the planned $7-billion Keystone XL pipeline, which would transport 500,000 barrels of crude per day from America’s neighbor to the north all the way to the Gulf coast of Texas.
So far, 521 activists have been arrested since their first protest on Saturday, Aug. 21. Also included in Monday’s arrests were Greenpeace Executive Director Phil Radford, president of CREDO Mobile Michael Kieschnick, 350.org Executive Director May Boeve and many others.
Hansen, a 44-year veteran of the nation’s space agency, is perhaps the best-known climate scientist in the world. He was the center of a years-long controversy in the last decade, after he claimed that NASA had tried to censor his findings about earth’s climate on behalf of the Bush administration. He’s also the author of “Storms of My Grandchildren,” a book that calls for radical action to combat climate change. He’s also been arrested before, protesting against mountaintop mining.
For full article GO HERE
Posted by seemorerocks at 11:59