The recipients of public welfare 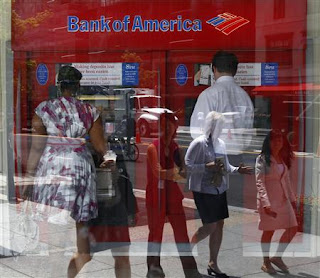 NEW YORK — Citigroup and Bank of America were the reigning champions of finance in 2006 as home prices peaked, leading the 10 biggest U.S. banks and brokerage firms to their best year ever with $104 billion of profits.
By 2008, the housing market’s collapse forced those companies to take more than six times as much, $669 billion, in emergency loans from the Federal Reserve. The loans dwarfed the $160 billion in public bailouts the top 10 got from the U.S. Treasury, yet until now the full amounts have remained secret.
Fed Chairman Ben Bernanke’s unprecedented effort to keep the economy from plunging into depression included lending banks and other companies as much as $1.2 trillion of public money, about the same amount U.S. homeowners currently owe on 6.5 million delinquent and foreclosed mortgages. The largest borrower, Morgan Stanley, got as much as $107.3 billion, while Citigroup took $99.5 billion and Bank of America $91.4 billion, according to a Bloomberg News compilation of data obtained through Freedom of Information Act requests, months of litigation and an act of Congress.
“These are all whopping numbers,” said Robert Litan, a former Justice Department official who in the 1990s served on a commission probing the causes of the savings and loan crisis. “You’re talking about the aristocracy of American finance going down the tubes without the federal money.”
It wasn’t just American finance. Almost half of the Fed’s top 30 borrowers, measured by peak balances, were European firms. They included Edinburgh-based Royal Bank of Scotland, which took $84.5 billion. Germany’s Hypo Real Estate Holding borrowed $28.7 billion, an average of $21 million for each of its 1,366 employees.
The $1.2 trillion peak on Dec. 5, 2008 — the combined outstanding balance under the seven programs tallied by Bloomberg — was almost three times the size of the federal budget deficit that year and more than the total earnings of all federally insured banks in the U.S. for the decade through 2010, according to data compiled by Bloomberg.
The balance was more than 25 times the Fed’s pre-crisis lending peak of $46 billion on Sept. 12, 2001, the day after terrorists attacked the World Trade Center in New York and the Pentagon. Denominated in $1 bills, the $1.2 trillion would fill 539 Olympic-size swimming pools.


The Fed has said it had “no credit losses” from the emergency programs, and a report by Federal Reserve Bank of New York staffers in February said they netted $13 billion in interest and fee income from August 2007 through December 2009.
“We designed our broad-based emergency programs to both effectively stem the crisis and minimize the financial risks to the U.S. taxpayer,” said James Clouse, deputy director of the Fed’s division of monetary affairs in Washington. “Nearly all of our emergency-lending programs have been closed. We have incurred no losses and expect no losses.”
While the 18-month U.S. recession that ended in June 2009 after a 5.1 percent contraction in gross domestic product was nowhere near the four-year, 27 percent decline between August 1929 and March 1933, the economy remains stressed. Homeowners are more than 30 days past due on mortgage payments for 4.38 million properties, and 2.16 million more properties are in foreclosure, representing a combined $1.27 trillion of unpaid principal, estimates Jacksonville, Fla.-based Lender Processing Services Inc.
“Why in hell does the Federal Reserve seem to be able to find the way to help these entities that are gigantic?” Rep. Walter B. Jones, R-N.c., a said at a June 1 congressional hearing in Washington. “They get help when the average businessperson down in eastern North Carolina, and probably across America, they can’t even go to a bank they’ve been banking with for 15 or 20 years and get a loan.”
Fed officials had resisted releasing borrowers’ identities, saying it would stigmatize banks, damaging stock prices or leading to depositor runs. Last year’s Dodd-Frank Act mandated an initial round of such disclosures in December. A group of the biggest commercial banks last year asked the Supreme Court to keep some details secret. In March, the high court declined to hear that appeal, and the central bank made an unprecedented release of records.
Data gleaned from 29,346 pages of documents and from other Fed databases reflect seven programs from August 2007 through April 2010: the Asset-Backed Commercial Paper Money Market Mutual Fund Liquidity Facility, Commercial Paper Funding Facility, discount window, Primary Dealer Credit Facility, Term Auction Facility, Term Securities Lending Facility and single- tranche open market operations.
The data show for the first time how deeply the world’s largest banks depended on the U.S. central bank. Even as firms asserted in news releases or earnings calls that they had ample cash, they drew Fed funding in secret, avoiding the stigma of weakness.
Two weeks after the bankruptcy of Lehman Brothers Holdings in September 2008, Morgan Stanley countered concerns that it might be next to go by announcing it had “strong capital and liquidity positions.” Its Sept. 29, 2008, press release, touting a $9 billion investment from Tokyo-based Mitsubishi UFJ Financial Group, said nothing about Fed loans.
That day, Morgan Stanley’s borrowing from the central bank peaked at $107.3 billion. The loans were the source of almost all of the firm’s available cash, based on lending data and documents released more than two years later by the Financial Crisis Inquiry Commission.


Mark Lake, a spokesman for New York-based Morgan Stanley, said the crisis caused the industry to “fundamentally re- evaluate” the way it manages its cash. While Lake said the bank had applied “the lessons we learned from that period,” he declined to specify what changes the bank had made.
For most loans, the Fed demanded collateral — securities that could be seized if the money wasn’t repaid. As the crisis deepened, the Fed relaxed its standards for acceptable collateral, increasing its risk. Typically, the central bank accepts only bonds with the highest credit grades, such as U.S. Treasuries. By late 2008, it accepted “junk” bonds, those rated below investment grade, and stocks, which are first to get wiped out in a liquidation.
“What you’re looking at is a willingness to lend against just about anything,” said Robert Eisenbeis, a former research director at the Federal Reserve Bank of Atlanta and now chief monetary economist in Atlanta for Sarasota, Fla.-based Cumberland Advisors Inc.
While the Fed’s last-resort lending programs generally charge above-market interest rates to deter routine borrowing, that practice sometimes flipped during the crisis. On Oct. 20, 2008, for example, the central bank agreed to make $113.3 billion of 28-day loans through its Term Auction Facility at a rate of 1.1 percent, according to a press release at the time.
The rate was less than a third of the 3.8 percent that banks were charging each other for one-month loans on that day.
New York-based JPMorgan Chase took $48 billion in February 2009 from TAF, a temporary alternative to the Fed’s 97- year-old discount window lending program. Chief Executive Officer Jamie Dimon said in a letter to shareholders last year that JPMorgan used TAF “at the request of the Federal Reserve to help motivate others to use the system.”
The data show that JPMorgan’s TAF borrowings peaked on Feb. 26, 2009, more than a year after TAF’s creation and the same day the program’s balance for all banks peaked at $493.2 billion.
“Our prior comment is accurate,” said Howard Opinsky, a spokesman for JPMorgan.
Goldman Sachs Group, which in 2007 was the most profitable securities firm in Wall Street history, borrowed $69 billion from the Fed on Dec. 31, 2008. Michael Duvally, a spokesman for Goldman Sachs, declined to comment.
The size of bank borrowings “certainly shows the Fed bailout was in many ways much larger than TARP,” said Kenneth Rogoff, a former chief economist at the International Monetary Fund and now an economics professor at Harvard University.
TARP is the Treasury Department’s Troubled Asset Relief Program, a $700 billion bank-bailout fund that provided public capital injections to banks. Because most of the Treasury’s investments were made in the form of preferred stock, they were considered riskier than the Fed’s loans, a type of senior debt.
Citigroup, the most chronic Fed borrower among the largest U.S. banks, was in debt to the central bank on seven of every 10 days from August 2007 through April 2010. Its average daily balance was almost $20 billion.
Jon Diat, a Citigroup spokesman, said it used programs that “achieved the goal of instilling confidence in the markets.”
“Citibank basically was sustained by the Fed for a very long time,” said Richard Herring, a finance professor at the University of Pennsylvania in Philadelphia who has studied financial crises.
Whether banks needed the Fed’s money for survival or used it because it offered advantageous rates, the central bank’s lender-of-last-resort role amounts to a free insurance policy for banks in a disaster, Herring said.
Access to Fed backup support “leads you to subject yourself to greater risks,” Herring said. “If it’s not there, you’re not going to take the risks that would put you in trouble and require you to have access to that kind of funding.”
Where the money went
The following is a list of the biggest borrowers, by peak amount, from liquidity programs offered by the Federal Reserve during the financial crisis.
The facilities are the discount window; the Asset-Backed Commercial Paper Money Market Mutual Fund Liquidity Facility; the Commercial Paper Funding Facility; the Primary Dealer Credit Facility; the Term Auction Facility; the Term Securities Lending Facility; and so-called single-tranche open market operations.
Rank Company Amount (in billions) Date
1 Morgan Stanley $107.3 Sept. 29, 2008
2 Citigroup $99.5 Jan. 20, 2009
3 Bank of America $91.4 Feb. 26, 2009
4 Royal Bank of Scotland $84.5 Oct. 10, 2008
5 State Street Corp. $77.8 Oct. 1, 2008
6 UBS $77.2 Nov. 28, 2008
7 Goldman Sachs $69.0 Dec. 31, 2008
8 JPMorgan Chase $68.6 Oct. 1, 2008
9 Deutsche Bank $66.0 Nov. 6, 2008
10 Barclays $64.9 Dec. 4, 2008
11 Merrill Lynch $62.1 Sept. 26, 2008
12 Credit Suisse Group $60.8 Aug. 27, 2008
13 Dexia $58.5 Dec. 31, 2008
14 Wachovia $50.0 Oct. 9, 2008
15 Lehman Brothers Holdings $46.0 Sept. 15, 2008
16 Wells Fargo $45.0 Feb. 26, 2009
17 Bear Stearns $30.0 March 28, 2008
18 BNP Paribas $29.3 April 18, 2008
19 Hypo Real Estate Holding $28.7 Nov. 4, 2008
20 Fortis Bank $26.3 Feb. 26, 2009
21 Norinchukin Bank $22.0 June 29, 2009
22 Commerzbank $22.0 July 16, 2009
23 Dresdner Bank $18.4 July 2, 2008
24 HBOS $18.0 Nov. 20, 2008
25 Societe Generale $17.4 May 22, 2008
26 Guggenheim Partners $16.4 Dec. 10, 2008
27 Hudson Castle Group $16.2 March 31, 2009
28 AIG $16.2 Jan. 27, 2009
29 General Electric $16.1 Nov. 21, 2008
30 Natixis $15.5 Dec. 22, 2008

On a similar theme this item from Democracy Now! may be of interest.
Covering Up Wall Street Crimes: Matt Taibbi Exposes How SEC Shredded Thousands of Investigations

Democracy Now!
An explosive new report in Rolling Stone magazine exposes how the U.S. Securities and Exchange Commission destroyed records of thousands of investigations, whitewashing the files of some of the nation’s largest banks and hedge funds, including AIG, Wells Fargo, Lehman Brothers, Goldman Sachs, Bank of America and top Wall Street broker Bernard Madoff. Last week, Republican Sen. Chuck Grassley of Iowa said an agency whistleblower had sent him a letter detailing the unlawful destruction of records detailing more than 9,000 information investigations. We speak with Matt Taibbi, the political reporter for Rolling Stone magazine who broke this story in his latest article, "Is the SEC Covering Up Wall Street Crimes?"
Posted by seemorerocks at 13:21