More on panic in the markets

British bank shares fell to their lowest levels in more than two years yesterday amid fears of a new funding crisis, raising the prospect that authorities may ban short-selling. 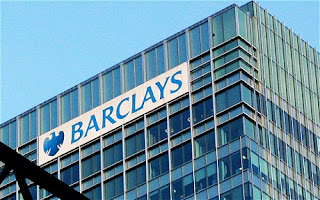 the Telegaph
12:13AM BST 19 Aug 2011
Bank-shares-dive-amid-fear-of-funds-crisis. The fall in bank shares came as more than £62bn was wiped off the value of the UK's leading companies in the most savage one-day stockmarket crash since the height of the financial crisis in 2008.


Shares in Barclays, Lloyds Banking Group, HSBC and Royal Bank of Scotland (RBS) led the collapse, falling to levels last seen in early 2009.
Barclays shares fell 11.5pc to 154p and have lost nearly a fifth of their value this week, while RBS dropped 11.3pc to 21.95p.
Lloyds ended down 9.3pc at 29.8p and its shares have now more than halved in value this year. HSBC shares closed at 509.6p, 6pc lower.


The falls mean the combined market value of Britain's four major banks is just £154bn, only £16bn more than the market capitalisation of China's largest bank, ICBC, which is valued at £138bn.
Fears of a funding crisis in the European banking system were blamed for the collapse in share prices, which has seen Barclays, Lloyds and RBS lose more than 40pc of their market value so far this year.


Jon Peace, head of banks research at Nomura, said it was possible the UK could now follow France, Italy, Spain and Belgium by introducing a ban on the short-sale of financial companies.
"If markets carry on like this for another couple of days it has got to be a possibility," said Mr Peace.
Market worries centre on the ability of European banks to fund dollar assets after it was revealed an unnamed bank had tapped an emergency European Central Bank lending facility for $500m (£303m), the first time the window has been used in over a year.
Officials at the New York Federal Reserve are said to be "very concerned" at the funding difficulties facing European banks.


In just over a month, the combined cash balance held by European banks with the Fed has shrunk by about $200bn to $758bn. The deposits are still far larger than before the financial crisis but the shrinkage is worrying.
John Briggs, a US-based bond market analyst at RBS, said: "It's not a funding crisis but it's funding concerns. The last experience we had with funding concerns wasn't good.
There is hypersensitivity to the fact that confidence can go in a nanosecond." Yields on 10-year US Treasury bills yesterday dipped below 2pc for the first time as investors sought safe havens for their money, with the prospect of a double-dip recession weighing on Western markets.
Yields on 10-year UK gilts dropped to 2.24pc at one point yesterday – their lowest rate since the 1890s.
Morgan Stanley analysts downgraded their global growth forecast for 2011 from 4.2pc to 3.9pc on the back of what the US investment bank described as "disappointing income data".
"A negative feedback loop between weak growth and soggy asset markets now appears to be in the making," said the bank's analysts.
Mining companies were among the shares dumped by investors, falling a combined 5pc in Europe amid concerns a new recession will mean a drop in demand for resources. Also, Brent crude oil fell $3.61, taking the price per barrel to $106.99 as the recession fears spread to energy markets.
The FTSE All-World equity index was down 3.8pc and the FTSE Eurofirst 300 suffered a loss of 4.7pc. The Dow Jones fell 3.68pc to 10990.58.
Gold continued upward, hitting a new high of $1826 an ounce as investors looked for a safe haven. Analysts at Commerzbank played down recent calls for the gold standard to be reintroduced, saying it was impractical and would require the metal's price to reach $12,000 per ounce to balance its value against that of global credit.
Posted by seemorerocks at 18:22