Under the deal, Exxon and Rosneft will invest $3.2bn (£1.9bn) in developing the Arctic Kara Sea 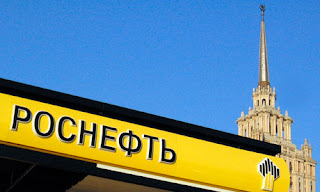 the Guardian
Tuesday 30 August 2011 20.10 BST
Exxon, the world's largest company, and Rosneft signed a deal to develop oil and gas reserves in the Russian Arctic, opening up one of the last unconquered drilling frontiers.
The deal, signed in the presence of Russian prime minister Vladimir Putin, dashes any hopes that BP had of reviving its own deal with Rosneft that was blocked in May by its billionaire partners in an existing Russian venture.
Exxon boss Rex Tillerson and Russia's top energy official deputy prime minister Igor Sechin were with Putin at the signing ceremony in the Black Sea resort of Sochi.
Calling the deal a "truly strategic partnership" and hailing Exxon's experience in exploiting Arctic reserves in Canada, Putin said: "New horizons are opening up. One of the world's leading companies, ExxonMobil, is starting to work on Russia's strategic shelf and deepwater continental shelf," Putin said.
Under the deal, Exxon and Rosneft will invest $3.2bn (£1.9bn) in developing East Prinovozemelsky Blocks 1, 2, and 3 in the Arctic Kara Sea and the Tuapse licensing block in the Black Sea.
Those regions "are among the most promising and least explored offshore areas globally, with high potential for liquids and gas," Exxon said in a statement. Rosneft, meanwhile, will be offered an equity interest in a number of Exxon exploration projects in North America, including deep-water Gulf of Mexico and tight oil fields in Texas, as well as in other countries.
"The fact that after the BP-Rosneft deal collapsed a new partner was found so quickly is a very positive signal," said Denis Borisov, energy analyst at Bank of Moscow.
The deal would help Rosneft share the risks of developing the Arctic, which could run into the hundreds of billions of dollars, and contrasts with the BP-Rosneft deal in that it does not include a share swap.
"If this is essentially the BP deal it is exposure to a pretty significant resource base. There's a lot of risk that's involved in it," said Jason Gammel, energy analyst at MacQuarie Research.
"Rosneft had been pretty clear that they were still looking to get a deal done up there," Gammel added. "It's a pretty big win for them if they were able to gain access up there, clearly dependent on what type of terms they got."
Posted by seemorerocks at 11:35