Finland's demands for collateral could leave Greek bailout in ruins 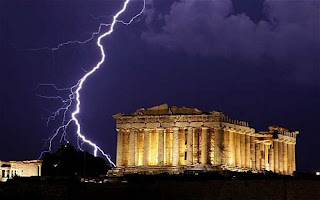 the Observer
Sunday 28 August 2011
For Greek politicians, the past month must have been a blessed relief, as the centre of Europe's sovereign debt crisis moved elsewhere. Italian trade unionists are gearing up for a general strike against austerity measures; Nicolas Sarkozy is slapping a supertax on the super-rich; and Spain is promising to make it unconstitutional to let the public finances get out of control.
But as September rolls around and the beaches clear, Greece is once again the focus of financial markets' fears.
In July, Athens secured a second bailout package worth €109bn (£96bn), which involved "haircuts" for holders of Greek debt, and contributions from its eurozone neighbours.
Both parts of that deal now look distinctly shaky. Finland, where the anti-European True Finns party scored well in recent elections, has demanded that Athens put up collateral against the Finnish share of the latest loan.
Other small but angry nations, including Austria, Slovenia and Slovakia, responded by saying that if Finland was getting collateral, they wanted some too. Eurozone finance ministers were discussing the issue this weekend; but the Finns appear reluctant to back down.
When questions emerged about what collateral Athens has left, given the €50bn privatisation plans it has already signed up to as a condition of the bailout, one Finnish minister reportedly said they would accept assets already earmarked for privatisation. Great swathes of Greek infrastructure are up for sale, from airports to casinos.
Setting aside collateral will reduce Greece's room for manoeuvre by tying up its assets; but, much more importantly, the row has laid bare the disarray in the eurozone.
For article GO HERE
Posted by seemorerocks at 17:02