More on the market

I woke up this morning  listening to Radio New Zealand.  Everything must be alright and all this is a figment of my imagination.  The Nikkei and the Dow are up a percent because of some piece of "good" news and the meeting in Wyoming didn't happen - or at least it wasn't talked about!


"Like Pavlov's dogs we look at the Dow and use that as a weather vane by which to deny all of the other realities manifesting themselves. All the Dow measures now is how fast wealth is being transferred from the poor to the rich. And the one's being eaten cheer it and take comfort from it. While others, with clearer vision see and warn of the imminence of collapse". 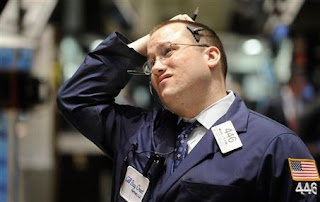 Paul Woolley: "The Market Has Become Dangerous For Humanity...It Isn't Reaching Equilibrium, It Is Falling Into Chaos"
Zero Hedge
28 August, 2011
For anyone who is still confused why the tail-wags-dog reverse relationship of the stock market as a leading indicator to the economy, and to western civilization in general, can be a problem for said civilization (not to mention the former) once the current iteration of central planning loses control over everything, as it always does, here is an interview between German daily Spiegel and Paul Woolley, a one time fund manager, and currently head of the LSE's center for Capital Market Dysfunctionality (sometimes affectionately known as the Princeton Economics department) who explains why things are on the edge of a precipice.
His message for anyone who thought that Irene may have been a risk: you ain't seen nothing yet. "The developments in recent weeks have made it quite clear that the markets don't function properly. Things are spinning out of control and are potentially dangerous for society. Only a fraternity of academic high priests connected to the finance markets is still speaking of efficient markets. Still each market participant is pursuing their own selfish interests. The market isn't reaching equilibrium -- it's falling into chaos."
From Der Spiegel:


Financial markets are inefficient and growing to the point of overwhelming the economy, according to Paul Woolley, an expert on market dysfunctionality. In an interview with SPIEGEL he explains why it's up to investors to stop dangerous trends and hold financial institutions accountable.
SPIEGEL: Mr. Woolley, you were fund manager for many years, but went on to found a research institute at the London School of Economics to study why financial markets repeatedly go haywire. Now speculators are once again betting against the euro, and share prices for big companies are falling by 20 percent in a day only to shoot back up again. What is going on?
Woolley: The developments in recent weeks have made it quite clear that the markets don't function properly. Things are spinning out of control and are potentially dangerous for society. Only a fraternity of academic high priests connected to the finance markets is still speaking of efficient markets. Still each market participant is pursuing their own selfish interests. The market isn't reaching equilibrium -- it's falling into chaos.
SPIEGEL: You've compared the finance markets to a cancer. What do you mean by that?
Woolley: The finance sector can -- and is -- growing until it overwhelms the economy. In good years the US finance industry cashes in on more than 40 percent of all corporate profits. In bad years they are saved by the taxpayers. The agents are doing a devilishly good job of developing innovative, complicated new products that people can't understand. It gives them the opportunity to earn excess returns and attract the best talent. While they are acting rationally, the result is a catastrophe.
SPIEGEL: For someone who took part in this activity himself, that is a harsh judgement.
Woolley: I suppose as an investment manager for a large fund manager I was quite successful. But I also spent much of my career taking advantage of investors' herd instinct. Most fund managers follow only the newest trends and strengthen them by doing so. In the short term that leads to success, but in the long term it leads to a crash. This connection occurred to me when we pulled out of technology stocks in the late 1990s and investors with us withdrew money. After the new economy bubble broke in 2000 they came back to us because we were better than the rest of the market.
SPIEGEL: Why did you leave the finance industry in 2006, then?
Woolley: I wanted to do something socially useful. We want to revolutionize the finance industry with our institute. You have to build into the models and the self interests of the banks and fund managers to which the most investors have delegated their investment decisions. The finance industry is characterized by many innovations. Because the customers hardly understand their innovative products, banks make amazing returns. But simultaneously there is a moral hazard: When something goes wrong the bankers just move on to the next employer. The banks bear the losses. Or, in the case of bankruptcy, the state takes on the costs.
SPIEGEL: Governments are trying to curb the financial industry. What are their chances?
Woolley: I'm skeptical about this. There are many incentives for banks to get around the rules. Sanctions won't help in the long run.
SPIEGEL: You rely on the insight of the investors, then?
Woolley: Right. The big investors are in a position to force their service providers, the banks, fund managers and bankers into better behaviour. I have developed 10 simple rules that big investors should introduce for their own interests. After all, average returns on pension funds worldwide, for example, have decreased repeatedly after the market crashes in recent years.
SPIEGEL: What should investors take to heart from these 10 rules?
Woolley: They should stop chasing short-term price changes, and instead take a long-range approach to investing. That's why they should cap annual turnover of portfolios at 30 percent per annum. They should stop paying performance fees to managers who increase the worth of funds because it encourages gambling. It is nearly impossible to assess whether above average returns come from a manager's skill, luck or market moves.
SPIEGEL: What can insurers and other large investors do additionally to contain the excesses of the financial markets?
Woolley: They shouldn't invest in hedge funds or private equity companies. Managers at these companies are particularly good at hiding high costs to enrich themselves. To generate returns they must take on significantly higher risks. Big investors should also insist that trading take place on a public market. Bank profits would sink almost automatically if they were no longer allowed to sell opaque products.
Interview conducted by Christoph Pauly
Posted by seemorerocks at 09:09