A Problem for US Banks: A Reverse Run 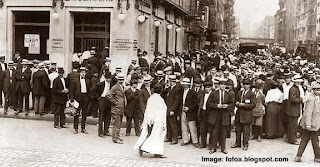 CNBC
18 Aug 2011 | 2:30 PM ET
Banks in the U.S. are experiencing a very strange problem.
There’s a bank run underway...but in reverse.
All the major U.S. banks are seeing an influx of deposits. Reserve levels at the Federal Reserve  are climbing to astronomical levels.
Balance sheets are expanding as never before.
Imagine that this is that scene from "It’s A Wonderful Life," but played in rewind. The depositors are rushing in with their money, nearly toppling George Bailey as they try to get their money in the bank.
When the U.S. dollar reserve in the Fed accounts of European banks decline, it necessarily means that the dollar reserves of the U.S. banks are increasing. As a result of various transactions, the Fed is moving money across the digital spreadsheet from European banks to U.S. banks.
This sounds like a good problem to have...but it isn’t.
For article GO HERE
Posted by seemorerocks at 17:49