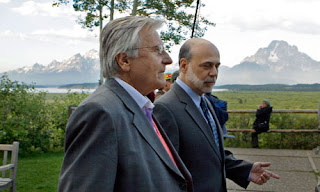 the Guardian
Friday 26 August 2011 19.06 BST
The Federal Reservedashed Wall Street's hopes of an immediate boost to the flagging US economy on Friday when its chairman, Ben Bernanke, said the central bank was adopting a wait-and-see approach to fresh stimulus measures.
Bernanke's eagerly awaited speech to central bankers at Jackson Hole in Wyoming proved to be an anti-climax as he failed to repeat the announcement he made at the same venue a year ago in which he signalled a new dose of electronic money creation through the quantitative easing (QE) process.
Shares on Wall Street dropped as Bernanke spoke but recovered after investors were reassured the Fed would consider more QE should the US continue to struggle over the coming weeks. The Fed's key policy committee will now meet for two days rather than one next month to discuss a range of options. By noon in New York, stocks had shrugged off initial disappointment at the speech, and at official figures showing that the world's biggest economy grew at an annual rate of just 1% in the second quarter of 2011, a downward revision from the initial estimate of 1.3%. The Dow Jones Industrial Average was up more than 130 points after falling by almost 200 points earlier.
The Fed chairman admitted that recovery from recession had been slower than hoped and that short-term growth prospects for the US had been adversely affected by Europe's debt crisis, and by the wrangling between Democrats and Republicans over the US budget. He stressed that any repetition of that partisan in-fighting could make global investors less willing to hold US assets or to put money into job-creating enterprises.
"Bouts of sharp volatility and risk aversion in markets have recently re-emerged in reaction to concerns about European sovereign debts and developments related to the US fiscal situation, including the recent downgrade of the US long-term credit rating by one of the major ratings agencies and the controversy concerning the raising of the US federal debt ceiling," said Bernanke. "It is difficult to judge by how much these developments have affected economic activity thus far, but there seems little doubt that they have hurt household and business confidence and that they pose ongoing risks."
While the Fed was alert to the risks, he said there was also a strong case, despite the poor state of America's public finance, for the new jobs package being planned by the Obama administration to tackle long-term unemployment.
"Although the issue of fiscal sustainability must urgently be addressed, fiscal policymakers should not, as a consequence, disregard the fragility of the current economic recovery. Fortunately, the two goals of achieving fiscal sustainability – which is the result of responsible policies set in place for the longer term – and avoiding the creation of fiscal headwinds for the current recovery are not incompatible. Acting now to put in place a credible plan for reducing future deficits over the longer term, while being attentive to the implications of fiscal choices for the recovery in the near term, can help serve both objectives."
Rejecting the idea that slow growth could morph into a long-lasting downturn, Bernanke said there had been some encouraging signs, including a 15% rise in US manufacturing output and a narrowing of the trade deficit.
"There have been some positive developments over the past few years, particularly when considered in the light of economic prospects as viewed at the depth of the crisis. Overall, the global economy has seen significant growth, led by the emerging-market economies. In the United States, a cyclical recovery, though a modest one by historical standards, is in its ninth quarter." However, he added: "Notwithstanding these more positive developments, it is clear that the recovery from the crisis has been much less robust than we had hoped."