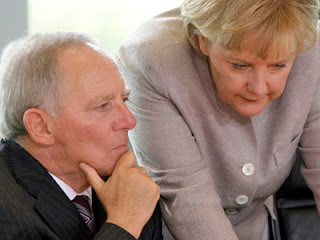 Business Insider
Aug. 22, 2011, 9:07 AM
European leaders continued to voice their opposition to Eurobonds over the weekend.
German Chancellor Angela Merkel again spoke of her opposition to a common bond for all members of the eurozone that could fund debt ridden euro nations. Speaking on Sunday, Merkel said (via The Financial Times):
“The markets want to force us into doing certain things, and that we won’t do. …Solving the current crisis won’t be possible with eurobonds and that’s why eurobonds are not the answer."
Merkel argued that there would be too many legal hurdles including changes to the EU Treaty and the German constitution.
German Finance Minister Wolfgang Schaeuble over the weekend said that the euro region would become an "inflation community" if it instituted euro bonds without unifying the fiscal policies of the 17 eurozone countries.
European Union official Herman Van Rompuy is also opposing the common bonds. Van Rompuy echoed Schaeuble in saying that the region could only consider replacing national debt markets with Euro bonds only after it achieved fiscal unity (via The Wall Street Journal):
"We can have eurobonds the day when we have real fiscal convergence; the day when everyone has balanced budgets or is almost there," he said. "That's when we could have euro bonds, but not before."
Meanwhile the European Central Bank has been buying up Italian and Spanish government bonds to keep borrowing costs stable and curb contagion in the region. Last week European markets were dragged down by French financial stocks, after some of Europe's biggest banks were thought to be at risk from their exposure to Greek debt and were reported to be facing a liquidity crisis.
Posted by seemorerocks at 07:42