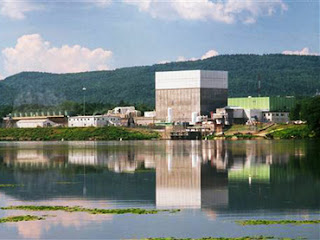 RT
18 August, 2011, 20:55
The governor of Vermont is saying he is disturbed over the recent detection of radioactive materials in a major state waterway, signaling the second appearance of radioactive elements in the area within weeks.
Commissioner Harry Chen of the State Department of Health has confirmed that water samples taken from the shore of the Connecticut River have tested positive for traces of tritium. In large amounts, that radioactive isotope of hydrogen has been linked to causing cancer. Though the samples collected in the river appear to be of relatively low levels, concern is amassing since another dangerous element was discovered earlier this month.
On August 2, health officials in Vermont said that fish swimming nine miles upstream from the Vermont Yankee nuclear plant tested positive for strontium-90, another radioactive isotope that has ties to both cancer and leukemia.
Vermont Governor Peter Shumlin is now pointing the finger at a nearby nuclear plant, but officials at the facility are saying they aren’t to blame. Despite operating a nuclear power plant mere yards from the banks of the river, Entergy, the owners of Vermont Yankee, are denying they are responsible for the leak.
"We have 31 monitoring wells on site that are tested regularly," Entergy’s Larry Smith said in a statement back on August 2. "No groundwater sample from any well at Vermont Yankee has ever indicated the presence of strontium-90, or any other isotope other than tritium."
With Entergy confirming that they might be to blame for tritium leaks, will this week’s findings that that element has made its way into the water prove detrimental to the facility?
“I am very concerned about the latest findings from the Vermont Health Department," Shumlin said in a statement. "Confirmation that tritium has reached the shoreline of the Connecticut River is further evidence of the immediate need for more extraction wells and increased monitoring of the situation."
The amount of tritium identified in the recent sampling was only slightly above detectable levels, but still proof enough that Entergy might not be operating accordingly to all safety precautions.
Entergy Corp. is actually taking the state of Vermont to federal court over what they say is the government’s unjust attempts at shutting the plant down.
“We do not know why the Governor would suggest Vermont Yankee is the source, but there is no factual basis for that suggestion,” says Entergy’s Smith.
While Smith does have a point, for now, Vermont Yankee is, in fact, a massive nuclear facility located only a radioactive carbon rod’s throw from the Connecticut River coast.
A report released by The Associated Press in June revealed that weakening restrictions and regulations among the safety codes that nuclear plants must implement have allowed for many facilities from coast-to-coast to operate dangerously. The report says that 82 of America’s operating reactors are more than 25 years old, with 66 units having been re-licensed for an additional two decades