Here is a report from Michael Kane of Collapse Net who lives in New York city. 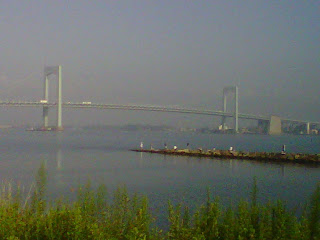 Friday, August 26, 2011: 6pm EST
The stores are mobbed in Queens, NY – that’s good.
State and local officials are sounding the alarm loudly and people are listening, but they are not leaving and I doubt they will leave at all. There is still time for individuals to choose on their own to evacuate NYC completely with no major traffic problems. However, that window of opportunity may be closed within 24 hours. Once winds hit 60 miles per hour Governor Cuomo has ordered the major bridges and Thruway closed.  NYC’s massive subway system is being shutdown tomorrow at noon (a historically unprecedented event) and the low-lying areas of the city have already been ordered to evacuate.
The official evacuation plans in NYC/L.I. are only to get people away from the coastlines and further inland. There is no evacuation plan for the entire city, and there never will be: remember that fact anytime you hear state and local officials use the term “evacuate.”
I doubled my water supply this morning at BJ’s in College Point (to about 40 gallons for 2 adults and 1 child) where they say they have plenty of water with 4 truckloads coming tomorrow morning (they open tomorrow morning at 9am). But they only had one tray of batteries left and did not anticipate any more before the hurricane, and I’m willing to bet they have already run out of water for today by the time of this writing.
By all accounts now, we are looking at (at least) a Category 1 storm hitting NYC directly. That can change at any moment and I believe we will not know for sure until we see what the direction of the storm is as it leaves North Carolina early Sunday morning (just after midnight or so). If the storm heads out to sea to the east, that could be good news or bad news. The good news is that the new path may indicate that NYC/L.I. will be spared almost completely. The bad news is that out at sea the storm could gain energy, going back up to a Category 2 or 3. It could then change direction – cutting back to the northwest – devastating NYC/L.I.
Officials from the Red Cross have personally told me a Category 3 storm directly hitting Long Island would have a worse impact than Hurricane Katrina had on New Orleans – that means more than 10,000 deaths.
A Category 1 storm will be a gigantic mess in NYC; comparable to Hurricane Gloria in 1985 on Long Island. That storm largely spared NYC but left a lot of damage in Nassau and Suffolk Counties. Gloria killed 8 people and caused a lot of injuries and insurance claims. But a storm like Gloria hitting NYC directly will likely cause more deaths and damage in the much more densely populated city of New York.
I do not know if I am leaving or weathering out the storm here in Queens. If I could I would leave right now, but life does not always workout to the whim of and individual wish. I have about a 24 hour window to make that decision. I will be following the track of the storm very closely.
Posted by seemorerocks at 16:42