Bank of America meltdown: stories from China and Japan

The Bank Of America Death Spiral: Meltdown is Now Systemic And Out of Control 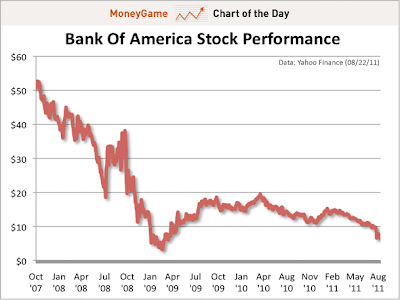 There's no question of a double dip for shares of Bank of America.
After financial crisis lows near $3, BAC traded above $15 for over two years.


In the past year, however an accumulation of foreclosure-related costs and concerns about capital requirements erased these gains.


Today headlines on both front pushed the stock down to $6.42.
Remember, Bank of America traded above $50 just a few years ago.
Although the bank says it has enough capital, analysts say it may need to raise an eye-popping $40-50 billion.
Japan: vigilant watch kept as cities go dark to save energy

Asahi.com
With street lights turned off and windows being kept open at night, due to power-saving efforts after the accident at the Fukushima No. 1 nuclear power plant, security patrols are on the alert to fight off a summer outbreak of crime.
At 9 p.m. on a warm and muggy night, a park in front of a subway station in Tokyo's Koto Ward is quiet, except for the occasional hustle and bustle as trains arrive and many passengers get off.
Ryuichi Onodera, 28, and his colleagues from a security company, make rounds of the park in groups of three. They check behind bushes, in restrooms and ensure that the playground equipment is not damaged. Koto Ward started nightly patrols of its parks at the end of July, commissioning security companies, including the company Onodera works for.
Funding for the patrols comes from the Tokyo Metropolitan Government's emergency job creation subsidies.


Security guards monitor 81 of the ward's 253 parks from 8 p.m. to 5 a.m.
Patrols were started after residents complained that parks were dark and threatening since the ward had cut a quarter of the lighting at each as an energy-saving measure.
Tadanori Koseki, a 75-year-old resident of the Kameido 2-chome district, said, "I have come to take a good look (during the neighborhood watch) more carefully and frequently than before."
Koseki has been patrolling the neighborhood for eight years since the neighborhood association started the voluntary watch once a week.


After the March 11 earthquake, the association added routes where lights do not reach, such as the back of buildings.
The association patrols use more flashlights than before, but because it's so dark they often are almost struck by bicyclists, Koseki said.
Also, the land ministry's Kanto Regional Bureau has turned off about half of the 80,000 streetlights along the national road to save electricity.


Still some governments have decided they may have went too far in the interest of conserving energy.
Tokyo's Shinagawa Ward, which had 90 percent of the lights in its parks turned off, plans to lower the rate to 50 percent or less.
"We have made the decision in light of other wards and for security reasons," an official said.
Setagaya Ward's Shimotakaido shopping district, which had halved the lighting in its park, returned to full lighting in mid-May.
Residential houses are scattered around the shopping mall, which spreads in four directions from Shimotakaido Station, and contains an elementary school building in the center.
Residents and store operators had complained about the reduced lighting, saying, "We have poor visibility" and "Security should come first as children pass the mall."
However, the reduced lighting has helped the sales of crime-prevention items.
Yoshio Co., a security products maker in Tokyo's Adachi Ward, has sold 18,000 whistles that contain reflective materials in the past five months, about six times more than shipments in the entire 2010, an official said.
The official said shipments of products using reflective materials are generally on the rise.
"Perhaps customers became interested in security goods because the streets got darker," a company official said.
The Tokyu Hands store in Shinjuku, a hobby and crafts shop, said about six times more auxiliary locks, which enable windows to remain firmly in place while they are open, were sold in July than the same month last year.
Living Design Center Ozone in Tokyo's Shinjuku Ward displays energy-saving products, including a shutter that contains a small window that can be opened.
Yen's rise spurs acceleration of emergency measures

Dollar's slump to new postwar low prompts dip into reserve funds
Japan Times
Japan is accelerating the compilation of emergency economic measures in the face of the yen's persistent strength, sources said Sunday.
The government had planned to include measures for coping with the strong yen in its third extra budget for fiscal 2011. But it is now considering moving the implementation date to September by using reserve funds from the principal budget for fiscal 2011, the sources said.
For article GO HERE
China Paper Warns of Impact From Euro Crisis 'Black Death'

CNBC
The "Black Death" of debt crisis across the Euro zone will hurt China by sapping demand for exports, although Beijing's relatively small holdings of euro assets will limit any damage to foreign exchange reserves, the nation's top official newspaper said on Monday.
The bleak diagnosis for the euro's prospects appeared in the overseas edition of the People's Daily, the top newspaper of China's ruling Communist Party, in a commentary by a former central bank official and an economist for the state-owned China Development Bank.
For article GO HERE
Chinese Think Tank Implies America May Be Falsifying Its Accounting, Says US On Way To Default


Punctuating just how "effective" Biden's visit to China was in order to "reassure that the US is solvent" (no seriously, that’s the name of the article) is a just released article in the Securities Times by Wang Tialong, member of Chinese think tank Center for International Economic Exchanges in which he went on to blatantly say that "The U.S. may be on its way to default on its debt despite the U.S. government's ability to print more money, a Chinese think tank researcher said Monday."
Now this is nothing new in the escalating war of words between the two countries, although increasingly China appears to be attacking the primary loophole that defenders of the unsustainable US debt use, namely the fall back to the USD as a reserve currency.
Wang went on further to implicitly accuse the US of fabricating economic data: "There is also no way to punish the issuer country if it falsifies its accounting and there is no way to restructure the issuer either, Wang said."
Well, when China accuses the US of "falsifying accounting" you know you have hit rock bottom.

From Dow Jones:
“The U.S. may be on its way to default on its debt despite the U.S. government's ability to print more money, a Chinese think tank researcher said Monday.
There is no guarantee for sovereign debt, which increases the risks the lenders face, said Wang Tianlong, a researcher at the China Center for International Economic Exchanges, a think tank supervised by the country's economic planner, adding that the issuer could be more careless in using the loans.
In the short term, the U.S. doesn't have much ability to reduce its deficit, Wang said in an opinion piece published in Securities Times. He added that the U.S. lacks the political system to guarantee that it will not default on its debt.
There is also no way to punish the issuer country if it falsifies its accounting and there is no way to restructure the issuer either, Wang said.
Wang's comments come after the U.S. Vice President Joe Biden said Sunday the U.S. "never will default" on its government debt and reassured Beijing that Chinese investments in the U.S. are safe”.
Slowly, surely, China is realizing that the endgame is nothing short of out of control debt inflation, which is precisely what having no way to "restructure the issuer" means.
That plus sending the US to bankruptcy court may be somewhat problematic. It also means that Chinese holdings of US debt will be increasingly worthless, and its population increasingly stabby as the price of hogs resumes its record climb.
The only alternative is for the CNY to float and for the Chinese, Russians and Germans to say enough to this broken economic model and launch a gold (and other hard asset) backed currency.
The only question is when.
Posted by seemorerocks at 18:46