More panic in the markets 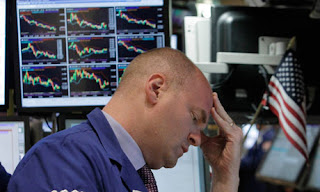 Stocks: 'It's a war zone out there'
NEW YORK (CNNMoney) -- Wall Street got socked on Thursday as renewed concerns about the U.S. and global economies sent major indexes plunging and pushed gold to a new high and bond yields to a record low.
Stocks were hit with bad news on multiple fronts. Morgan Stanley put out a dismal forecast for global economic growth. A key reading on U.S. housing came in worse than expected. And a report showed a significant slowdown in the domestic manufacturing sector.
Investors rushed to move their money into safe U.S. government bonds -- and the yield on the benchmark 10-year Treasury briefly fell below 2%.