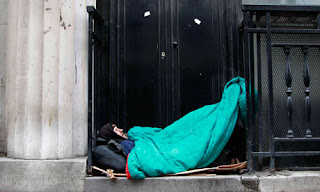 The Guardian,
Wednesday 31 August 2011
The economic downturn and the government's deep cuts to welfare will drive up homelessness over the next few years, raising the spectre of middle class people living on the streets, a major study warns.
The report by the homelessness charity Crisis, seen by the Guardian, says there is a direct link between the downturn and rising homelessness as cuts to services and draconian changes to benefits shred the traditional welfare safety net.
In the 120-page study, co-authored by academics at the University of York and Heriot-Watt University, Crisis highlights figures released over the summer that show councils have reported 44,160 people accepted as homeless and placed in social housing, an increase of 10% on the previous year and the first increase in almost a decade
.
Last year another 189,000 people were also placed in temporary accommodation – such as small hotels and B&Bs – to prevent them from becoming homeless, an increase of 14% on the previous year.
Crisis says that with no sign of economic recovery in sight, there are already signs that homelessness is returning to British streets. In London, rough sleeping, the most visible form of homelessness, rose by 8% last year. Strikingly, more than half of the capital's 3,600 rough sleepers are now not British citizens: most are migrants from eastern Europe who cannot find work and, unable to get benefits or return home, are left to fend for themselves on the streets.
The charity says the evidence is that the current recession has seen the poor suffer the most, but other parts of society may be in jeopardy if the government's radical welfare agenda is acted on as the economy stutters.
For article GO HERE
Posted by seemorerocks at 17:32