News on the economy

We'll see what the markets make of this tomorrow.... 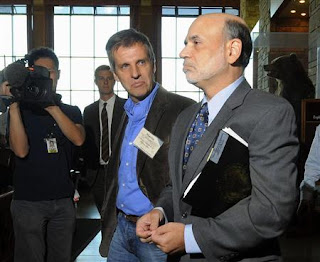 “Encumbered by debt and systemic failure, governments and organizations at all levels are quickly becoming dysfunctional. Whatever they do seems to be ineffectual, or even makes things worse”
Reuters’
Sun Aug 28, 2011 7:41pm EDT
(Reuters) - The heads of the U.S. Federal Reserve, IMF and OECD stepped up pressure on political leaders on both sides of the Atlantic to shake off their inertia and tackle urgent economic problems.


If politicians ignore their pleas -- including a blunt call from International Monetary Fund chief Christine Lagarde to "act now" -- the slowdown in world growth and debt turmoil in Europe could morph into a deeper crisis, top monetary officials and economists warned at an annual retreat here.
"I hope they listen," said Bank of Israel Governor Stanley Fischer.
Alarm over political deadlock was as obvious a backdrop to the annual meeting of policymakers in the wilds of Wyoming as the thunderstorms that rolled over the nearby Grand Teton peaks and dumped rain on the Jackson Lake Lodge.
For article GO HERE
Central Bankers Worry Economy Still in Peril
Wall Street Journal
After four years of fighting crises and pumping money into the financial system, the world's central bankers are concluding that the global economy is still in a precarious position and the policy apparatus is ill-equipped to help.
The mood here in the Grand Tetons, where central bankers and private economists from around the world gather each August, was distinctly gloomy.
The angst was underscored in a blunt speech by the International Monetary Fund's new managing director, Christine Lagarde. "We risk seeing the fragile recovery derailed," she said Saturday. Those risks have been aggravated, she said, by the public's sense that policy makers' response has been inadequate. "We are in a dangerous new phase," the former French finance minister said.
What Ms. Lagarde said publicly, several central bankers expressed privately. The central bankers' problems are compounded by internal divisions and current realities. Several U.S. Federal Reserve officials have doubts about how much more they can do to resuscitate a U.S. recovery that is falling short of Fed expectations. Most European Central Bank officials believe the solutions to Europe's sovereign-debt, governance and banking woes lie with elected leaders, not the ECB.
For article GO HERE
Federal government to help reimburse states for Irene damage
Where, in the midst of this economic and social breakdown is the US government going to find the money to pay for this - print it?
Hurricane Irene could cost U.S. state and local governments billions of dollars in damages, but funds from the federal government might ultimately cover much of this expense.
Reuters
Aug 28, 2011 5:05pm EDT

It is too early to estimate the cost of the storm, but New Jersey Governor Chris Christie said New Jersey alone may have suffered tens of billions of dollars in damage.
The timing is terrible for municipalities as they dig their way out of their bleakest economic period in decades after the financial crisis and recession sank budgets and forced widespread cuts in expense and increased taxes.
For article GO HERE
Posted by seemorerocks at 18:22