Hurricane Katia Could Be A Category 3 Storm By Sunday 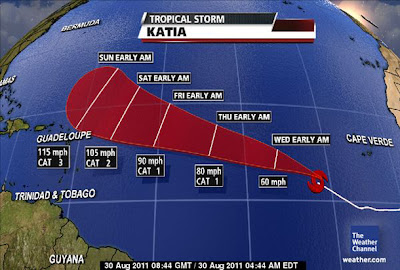 Business Insider
Aug. 30, 2011, 6:35 AM
Forming in the same general weather patterns that guided Irene's course up the U.S. Eastern seaboard, Tropical Storm Katia was officially named Tuesday and looks to be headed toward Puerto Rico.
According to the National Weather Service Katia's path is slightly north of Irene's and should put it northeast of Puerto Rico by Sunday.
Currently about 535 miles southwest of the Cape Verde Islands Katia's moving quickly with sustained 40 mph winds and according to the National Hurricane Center could be a powerful Category 3 hurricane by this weekend (via CBS Tampa).
The Center reports Katia will have hurricane intensity by late Wednesday or early Thursday.
Posted by seemorerocks at 09:06