A more severe crash than the one triggered by the collapse of Lehman Brothers could be on the way, according to alarm signals in the credit markets. 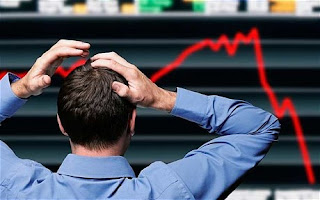 The Telegraph
9:50PM BST 24 Aug 2011
Insurance on the debt of several major European banks has now hit historic levels, higher even than those recorded during financial crisis caused by the US financial group's implosion nearly three years ago.
Credit default swaps on the bonds of Royal Bank of Scotland, BNP Paribas, Deutsche Bank and Intesa Sanpaolo, among others, flashed warning signals on Wednesday. Credit default swaps (CDS) on RBS were trading at 343.54 basis points, meaning the annual cost to insure £10m of the state-backed lender's bonds against default is now £343,540.
The cost of insuring RBS bonds is now higher than before the taxpayer was forced to step in and rescue the bank in October 2008, and shows the recent dramatic downturn in sentiment among credit investors towards banks.
"The problem is a shortage of liquidity – that is what is causing the problems with the banks. It feels exactly as it felt in 2008," said one senior London-based bank executive.
"I think we are heading for a market shock in September or October that will match anything we have ever seen before," said a senior credit banker at a major European bank.
To see article GO HERE
Posted by seemorerocks at 19:38