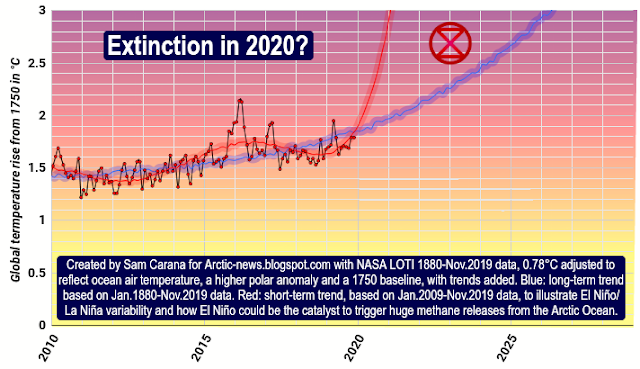 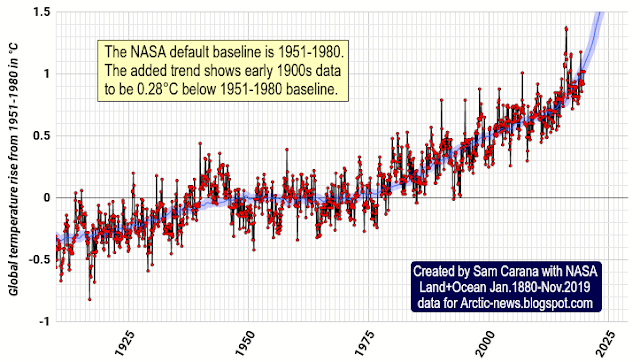 Furthermore, the NASA Land+Ocean temperature index (LOTI) uses sea surface temperatures, but ocean air temperatures seem more appropriate, which adds a further 0.1°C adjustment. Also, when comparing current temperatures with preindustrial ones, it's hard to find data for the polar areas. Treating these data as 'missing' would leave important heating out of the picture. After all, the polar areas are heating up much faster than the rest of the world, and especially so in the Arctic region. Therefore, a further 0.1°C adjustment was used to reflect higher polar temperature anomalies, resulting in the above-mentioned 0.78°C adjustment.

Finally, the red trend illustrates El Niño/La Niña variability. As discussed in a recent post, an El Niño is forecast for 2020 and this could be the catalyst to trigger huge methane releases from the Arctic Ocean.

The image below shows El Niño/La Niña variability going back to 1950, added to the NOAA monthly temperature anomaly.

As said, the Arctic region is heating up much faster than the rest of the world. There are several reasons why this is the case. Decline of the sea ice makes that less sunlight gets reflected back into space and that more sunlight is reaching the Arctic Ocean. This also causes more water vapor and clouds to appear over the Arctic Ocean. Furthermore, Arctic sea ice has lost most of the thicker multi-year ice that used to extend meters below the surface, consuming huge amounts of ocean heat entering the Arctic Ocean along ocean currents from the North Atlantic and the North Pacific oceans.

As above image shows, the temperature rise of the oceans on the Northern Hemisphere is accelerating. This constitutes a critical tipping point, i.e. there are indications that a rise of 1°C will result in most of the sea ice underneath the surface to disappear. This sea ice used to consume the inflow of warm, salty water from the Atlantic Ocean and the Pacific Ocean. So, while there may still be sea ice left at the surface, since low air temperatures will cause freezing of surface water, the latent heat buffer has gone.

As long as there is sea ice, this will keep absorbing heat as it melts, so the temperature will not rise at the sea surface. The amount of energy absorbed by melting ice is as much as it takes to heat an equivalent mass of water from zero to 80°C.

The danger is that, as Arctic Ocean heating accelerates further, hot water will reach sediments at the Arctic Ocean seafloor and trigger massive methane eruptions, resulting in a huge abrupt global temperature rise. As discussed in an earlier post, a 3°C will likely suffice to cause extinction of humans.

• Most Important Message Ever
https://arctic-news.blogspot.com/2019/07/most-important-message-ever.html