3 people died from lack of dialysis in Puerto Rico 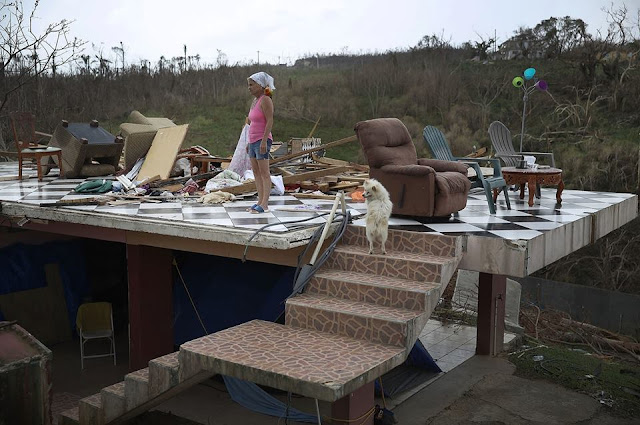 Corozal, Puerto Rico. - Irma Maldanado stands with her parrot and dog in what is left of her home after it was destroyed by Hurricane Maria...   Photograph: Joe Raedle.

" I am here right now with a sip from a cell tower, which will probably have its diesel stolen and will fade out.

3 died today from lack of dialysis in a hospital - no power for six days, no diesel for the emergency generators, no diesel for the diesel trucks to take the diesel. I spent 12 hours today to get fuel to go work and the fuel tanker never arrived to the station. Over 3,000 cadavers were unearthed naturally by flooding in Lares and now float on the township, creating pestilence problems.

There are over 1,200 containers with aid and supplies (food, everything for we are an island) that cannot be distributed for truckers don't have diesel for the trucks. I have seen a grand total of 2 National Guard trucks going from Ponce up Cayey since the hurricane. That's all the US military presence I've seen firsthand. 99% of everything has been done by us, manually. Police have no radio, no comms, no phones, no gas to move their cars.

WHERE IS OUR MILITARY?? Puerto Rico is part of the United States. Its citizens are American citizens. Why the hell isn't our government helping our own people? Because they're brown? (Many are not) Because they speak Spanish? (Almost all also speak English) This is an outrage!! Worse than Katrina.

Please call the White House and demand that the US military be sent in ASAP and that the president comment on the extreme peril that 3.4 million of our fellow citizens face."