Qatar confirms what was already known about the war on S


A television interview of a top Qatari official confessing the truth behind the origins of the war in Syria is going viral across Arabic social media during the same week a leaked top secret NSA document was published which confirms that the armed opposition in Syria was under the direct command of foreign governments from the early years of the conflict.
And according to a well-known Syria analyst and economic adviser with close contacts in the Syrian government, the explosive interview constitutes a high level "public admission to collusion and coordination between four countries to destabilize an independent state, [including] possible support for Nusra/al-Qaeda." Importantly, "this admission will help build case for what Damascus sees as an attack on its security & sovereignty. It will form basis for compensation claims."

A 2013 London press conference: Qatari Prime Minister Sheikh Hamad bin Jassim bin Jabr Al Thani with U.S. Secretary of State John Kerry. A 2014 Hillary Clinton email confirmed Qatar as a state-sponsor of ISIS during that same time period.
As the war in Syria continues slowly winding down, it seems new source material comes out on an almost a weekly basis in the form of testimonials of top officials involved in destabilizing Syria, and even occasional leaked emails and documents which further detail covert regime change operations against the Assad government. Though much of this content serves to confirm what has already long been known by those who have never accepted the simplistic propaganda which has dominated mainstream media, details continue to fall in place, providing future historians with a clearer picture of the true nature of the war.
This process of clarity has been aided - as predicted - by the continued infighting among Gulf Cooperation Council (GCC) former allies Saudi Arabia and Qatar, with each side accusing the other of funding Islamic State and al-Qaeda terrorists (ironically, both true). Increasingly, the world watches as more dirty laundry is aired and the GCC implodes after years of nearly all the gulf monarchies funding jihadist movements in places like Syria, Iraq, and Libya.


The top Qatari official is no less than former Prime Minister Hamad bin Jassim bin Jaber al-Thani,who oversaw Syria operations on behalf of Qatar until 2013 (also as foreign minister), and is seen below with then-Secretary of State Hillary Clinton in this Jan. 2010 photo (as a reminder,Qatar's 2022 World Cup Committee donated $500,000 to the Clinton Foundation in 2014).

In an interview with Qatari TV Wednesday, bin Jaber al-Thani revealed that his country, alongside Saudi Arabia, Turkey, and the United States, began shipping weapons to jihadists from the very moment events "first started" (in 2011).
Al-Thani even likened the covert operation to "hunting prey" - the prey being President Assad and his supporters - "prey" which he admits got away (as Assad is still in power; he used a Gulf Arabic dialect word, "al-sayda", which implies hunting animals or prey for sport). Though Thani denied credible allegations of support for ISIS, the former prime minister's words implied direct Gulf and US support for al-Qaeda in Syria (al-Nusra Front) from the earliest years of the war, and even said Qatar has "full documents" and records proving that the war was planned to effect regime change.


According to Zero Hedge's translation, al-Thani said while acknowledging Gulf nations were arming jihadists in Syria with the approval and support of US and Turkey: "I don't want to go into details but we have full documents about us taking charge [in Syria]." He claimed that both Saudi Arabia's King Abdullah (who reigned until his death in 2015) and the United States placed Qatar in a lead role concerning covert operations to execute the proxy war.
The former prime minister's comments, while very revealing, were intended as a defense and excuse of Qatar's support for terrorism, and as a critique of the US and Saudi Arabia for essentially leaving Qatar "holding the bag" in terms of the war against Assad. Al-Thani explained that Qatar continued its financing of armed insurgents in Syria while other countries eventually wound down large-scale support, which is why he lashed out at the US and the Saudis, who initially"were with us in the same trench."
In a previous US television interview which was vastly underreported, al-Thani told Charlie Rosewhen asked about allegations of Qatar's support for terrorism that, "in Syria, everybody did mistakes, including your country." And said that when the war began in Syria, "all of use worked through two operation rooms: one in Jordan and one in Turkey."
Below is the key section of Wednesday's interview, translated and subtitled by @Walid970721. Zero Hedge has reviewed and confirmed the translation, however, as the original rush translator hasacknowledged, al-Thani doesn't say "lady" but "prey" ["al-sayda"]- as in both Assad and Syrians were being hunted by the outside countries. 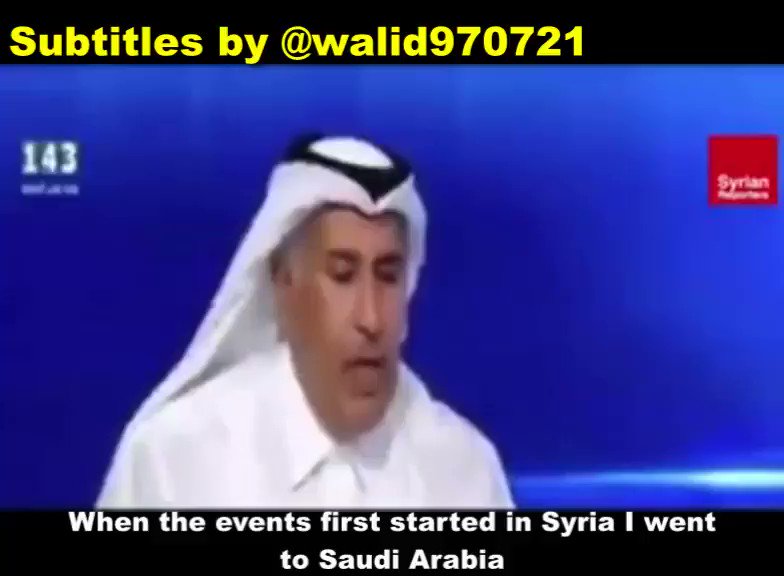 Walid @walid970721
#Qatar's ex PM says that Qatari support for jihadists including Nusra in #Syria was in coordination w/ KSA, Turkey & the US via @BBassem7


The partial English transcript is as follows:

"When the events first started in Syria I went to Saudi Arabia and met with King Abdullah. I did that on the instructions of his highness the prince, my father. He [Abdullah] said we are behind you. You go ahead with this plan and we will coordinate but you should be in charge. I won’t get into details but we have full documents and anything that was sent [to Syria] would go to Turkey and was in coordination with the US forces and everything was distributed via the Turks and the US forces. And us and everyone else was involved, the military people. There may have been mistakes and support was given to the wrong faction... Maybe there was a relationship with Nusra, its possible but I myself don’t know about this… we were fighting over the prey ["al-sayda"] and now the prey is gone and we are still fighting... and now Bashar is still there. You [US and Saudi Arabia] were with us in the same trench... I have no objection to one changing if he finds that he was wrong, but at least inform your partner… for example leave Bashar [al-Assad] or do this or that, but the situation that has been created now will never allow any progress in the GCC [Gulf Cooperation Council], or any progress on anything if we continue to openly fight."

As is now well-known, the CIA was directly involved in leading regime change efforts in Syria with allied gulf partners, as leaked and declassified US intelligence memos confirm. The US government understood in real time that Gulf and West-supplied advanced weaponry was going to al-Qaeda and ISIS, despite official claims of arming so-called "moderate" rebels. For example, a leaked 2014 intelligence memo sent to Hillary Clinton acknowledged Qatari and Saudi support for ISIS.
The email stated in direct and unambiguous language that:

"the governments of Qatar and Saudi Arabia, which are providing clandestine financial and logistic support to ISIL and other radical Sunni groups in the region."

Furthermore, one day before Prime Minister Thani's interview, The Intercept released a new top-secret NSA document unearthed from leaked intelligence files provided by Edward Snowden which show in stunning clarity that the armed opposition in Syria was under the direct command of foreign governments from the early years of the war which has now claimed half a million lives.

The newly released NSA document confirms that a 2013 insurgent attack with advanced surface-to-surface rockets upon civilian areas of Damascus, including Damascus International Airport, was directly supplied and commanded by Saudi Arabia with full prior awareness of US intelligence. As the former Qatari prime minister now also confirms, both the Saudis and US government staffed "operations rooms" overseeing such heinous attacks during the time period of the 2013 Damascus airport attack.
No doubt there remains a massive trove of damning documentary evidence which will continue to trickle out in the coming months and years. At the very least, the continuing Qatari-Saudi diplomatic war will bear more fruit as each side builds a case against the other with charges of supporting terrorism. And as we can see from this latest Qatari TV interview, the United States itself will not be spared in this new open season of airing dirty laundry as old allies turn on each other.
Posted by seemorerocks at 18:28