We have lost over 70 per cent of insects in the space of 27 years and the lungs of the planet, the Amazon, is losing its role as a carbon sink and becoming a source of carbon.


And yet we are being fed the same old tired mantra that we have heard for over quarter of a century. 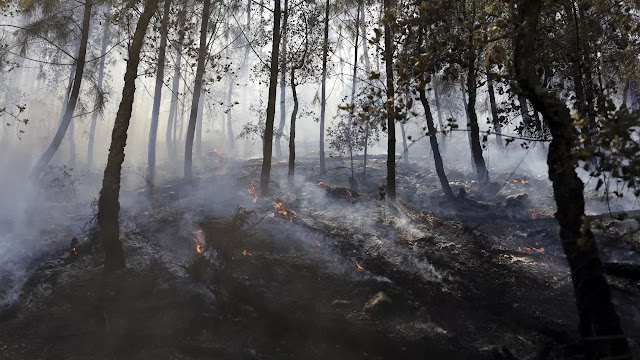 
In 2016, the world’s forests lost more than 73.4 million acres of tree cover — an area roughly the size of New Zealand, and a 51 percent increase from the year before.

Tree cover — considered any wooded area, natural or otherwise — is declining at an alarming rate, fueled by poor forest management and climate change-driven drought, according to a study published Monday by Global Forest Watch.

“We see a massive increase in tree cover loss in 2016, and, from what we have seen, it seems like the main reason for the increase is a proliferation of forest fires both in the tropics and other parts of the world,” Mikaela Weisse, a research analyst with Global Forest Watch, told ThinkProgress. “Part of the fires that we are seeing are natural, but really a lot is from this human element that we need to get under control. We need to do a better job of managing the fires that are set on the landscape.”

The tree cover loss recorded in 2016 is the highest amount since Global Forest Watch began keeping records in 2000. Tree cover loss is a broader category than deforestation, and measures the removal — natural or otherwise — of any kind of tree or tree canopy, whether in a forest or in a man-made tree plantation. Deforestation, which is a subset of tree forest loss that refers only to the act of removing trees and transitioning the land into another use, like agriculture or pasture, is more difficult to plot with satellite data — though studies looking specifically at deforestation have suggested that globally, deforestation rates arealso increasing.

According to the study, fires in the tropics — specifically Brazil and Indonesia — accounted for more than a quarter of global tree cover loss in 2016. Tropical fires like the ones seen in the 2016 tree cover data are unique, Weisse explained, because forests in the tropics rarely burn naturally. Instead, tropical fires are mostly human-caused, set by forest or grassland managers as a way to clear underbrush from forests or tree plantations. But in times of extreme drought — like 2016, when El Nino fueled serious drought throughout the Amazon and Indonesia — man-made fires can easily spread out of control, destroying millions of acres of tree cover.

“Those fires are not a natural part of that ecosystem,” Weisse said. “It is pretty notable that there has been this huge scale of fires that we are picking up, because those fires shouldn’t be happening in the first place.”

In late 2015, fueled by record drought from El Nino, fires exploded across Indonesia, with more than 100,000 active fires popping up between September and October. The fires were all started by human activity, as part of a “slash-and-burn” tradition of forest clearance where forests are burned each year to make room for new planting (mostly by palm oil or pulpwood companies). With El Nino creating especially dry conditions, however, the fires spread more easily than in past years, growing to eventually release 1.62 billion metric tons of carbon dioxide in the process. Because tree cover loss is largely tracked via satellite, much of the losses associated with Indonesia’s late-2015 fires did not show in the record until 2016.

The other primary source of tropical tree cover loss occurred in Brazil, where illegal fire usage combined with poor government oversight combined to burn through some 9.1 million acres in 2016. Like in Indonesia, fires in Brazil are started by humans in an effort to clear forest for agriculture or industry — and like in Indonesia, climate-fueled drought make these annual fires more likely to spread over large areas. In Brazil, illegal loggers have also been known to set fires in an attempt to force indigenous populations off of their land, thus opening the area up for logging.

“Humans are probably setting fires at an equal rate every year, but it’s during these years of drought that they are able to catch on and get out of control,” Weisse said.

Deforestation in Brazil has been steadily increasing in recent years, after nearly a decade of decline. That’s concerning both for climate experts, who warn that Amazonian tree loss has historically been a major contributor to global warming, as well as for indigenous communities that depend on forests for their homes and livelihoods.

But it’s not just tropical fires that contributed to 2016’s high rate of tree cover loss. Portugal had a particularly devastating year for tree cover loss fueled by a series of wildfires — altogether, the country lost 4 percent of its tree cover in a single year. This year could be even worse for the country, as several fires have claimed more than 60 lives and burned through over a million acres.

Drought and high temperatures have already fueled a record-breaking fire season in 2017, leading researchers to warn that climate change is likely only going to hasten the pace of tree cover loss globally. In California, for instance, years of drought followed by a particularly wet winter fueled growth of underbrush, while a record-hot summer subsequently dried that brush into ideal fuel for fires. In early October, a series of wildfires grew overnight in northern California to be some of the most destructive fires in the state’s history, killing over 30 residents and destroying some 5,700 structures.
“In general, we’ve been seeing an overall increasing trend since we started this data in 2000, we and many other organizations are working really hard to get those numbers to come down,” Weisse said. “Indications are that it will only get worse. As this continues, we need to be putting more and more effort into these efforts.”

A new report by the World Wildlife Federation (WWF), The Living Forests, has highlighted Australia as the only developed country in the top 10 deforestation hotspots.

WWF predicted up to 6 million hectares would be cleared in Eastern Australia by 2030, ranking it with the Amazon, Vietnam, Borneo and the Congo.

Deforestation rates increased 250% to more than 1.2 million hectares between 2011 and 2016 after tree-clearing controls were gutted in Queensland and NSW.
Posted by seemorerocks at 15:10