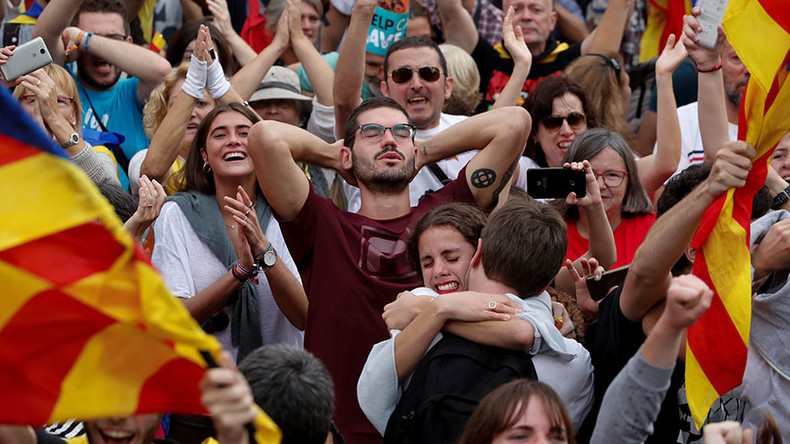 
Update 4: In a live TV address to the nation, Spain's PM Rajoy just announced that it is a "sad day" in which Catalans showed "contempt" for democracy, and ignored the general interest; that the Catalan declaration is unacceptable to majority of Catalans, and that, as a result and as expected, he is firing Catalan president Carles Puigdment, the Catalan police chief, and the entire Catalan government as "prudence" and "serenity" are now needed: "we never wanted to reach this situation".
Ministries in the central government will assume powers of the Catalan administration.
The Prime Minister also announced he has dissolved the Catalan Parliament and called for snap elections to be held on December 21 which will be "free, legal and clean".
As The Spain Report adds, the central government also ordered all of Catalonia's "embassies" abroad closed, along with the region's publicly funded Diplocat diplomacy service, and sacked the director general of the Catalan Police (Mossos), Pere Soler.
Rajoy also said Spain has enough resources to "recover normality" in Catalonia within the law and thanked the Spanish Socialist Party (PSOE) and Ciudadanos for their support.
* * *
Update 3: Spain’s top prosecutor will seek rebellion charges for those responsible for a vote in favor of declaring an independent Catalan republic, an official Spanish spokesman said according to The Independent. The spokesman saidthe prosecutor is looking to determine if the charges should be limited to the Catalan cabinet, including President Carles Puigdemont and Vice President Oriol Junqueras, or if they should also include members of the parliament’s governing board and lawmakers.
The official, who spoke under condition of anonymity in line with internal rules, said the charges could be brought as early as Monday. As Mr. Maza warned,"The rebellion crime is punishable by 30 years in prison if it is a crime of considerable gravity, of course...if the Catalan police did not comply with the order, Spain would take over control of the force."
As a reminder, and as The Spain Report tweeted what happened the last time the Catalan republic was declared, in 1934:, there was i) State of war; ii) Lasted 10 hours and iii) led to 46 dead in Barcelona.
Puigdemont has called on fellow separatists to remain peaceful ahead of the expected crackdown by Spanish authorities. Facing a crowd of hundreds of supporters packing Catalonia’s parliament building, he said: “In the days ahead we must keep to our values of pacificism and dignity. It’s in our, in your hands to build the republic.” Good luck.
* * *
Update 2: Article 155 is now official, after Spain's Constitutional Court lists the series of measures allowing central government to force Catalonia regional administration to obey national law. The two-page document was published Friday in Spain's Official Gazette, in step necessary to becoming law. The measures approved by the Senate follow government proposal, under Article 155 of Constitution. By way of explanation, the actions were taken due to “extraordinary seriousness of the breach of constitutional obligations and the carrying out actions gravely against the general interest” by Catalonia institutions.

As Article 155 was codified by publication in the Spanish Official Gazette, at the top of the list published by the Constitutional Court was the potential removal from office of the region’s president, vice-president and cabinet.The list was published along with a two-page addendum of modifications by the Senate. The Catalan administration will continue to function, though the central government in Madrid can veto its decisions. Additionally, the region’s police, the 17,000-member Mossos d’Esquadra, must take direct orders from Madrid, which can supplement their role with national police, which already are under control of the central government. The measures took immediate effect on publication.
* * *
Update: Just minutes after the Catalan government voted for Independence from Spain, with a former Decision of Independence likely to follow momentarily, over in Madrid wasted no time in responding, and moments ago, with 214 for and 47 against, voted to approve Article 155 of Spain's 1978 Constitution, aka the Nuclear Option which has never been used before, suspending home rule in Catalonia, and giving Prime Minister Rajoy the power to oust the Catalan government.
What happens next?
Spain will promptly move to remove the Catalan president, suspend his ministers and assume authority over the region's public media, police and finances, the only question is how, and what this process will look like.
Indeed, as Bloomberg reported earlier, Spanish politician Garcia Albiol tweeted that Spanish Prime-Minister Mariano Rajoy will restore democracy in Catalonia, adding that courts will reprimand the “plotters.” Furthermore, Spain's El Pais reported that rebellion charges will likely be leveled soon at Catalans for Secession.
An angry Rajoy spoke to reporters in Madrid after the Catalan parliament declared independence and said that "the Catalan parliament has approved something that in the opinion of the great majority of people doesn’t just go against the law but is a criminal act because it supposes declaring something that is not possible which is the independence of Catalonia.”
He also said that he will address Spain at the end of the evening.
In terms of immediate next steps, there will be a Spanish Cabinet Meeting, which has been moved ahead to 5pm local time.
After that, things may get delicate, especially if Spain sends in the proverbial cavalry.
Incidentally, here is the historic moment Catalonia declared independence from Spain: 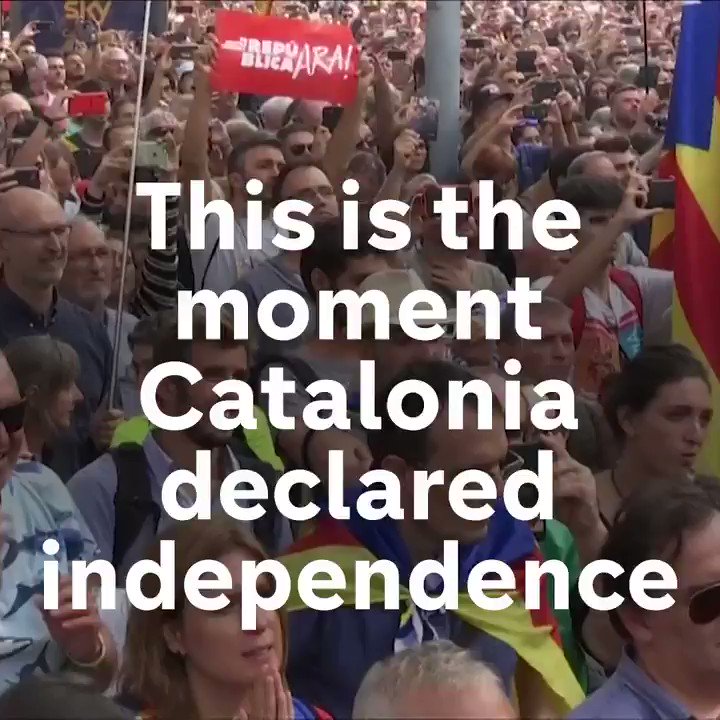 Channel 4 News  ✔@Channel4News
This is the moment Catalonia declared independence from Spain.

Twitter Ads info and privacy
* * *It's Official! The Catalan Parliament has just voted for independence - 70 'Yes' (needed 68), 10 'No', 2 blank.
As AP reports, Catalan separatist lawmakers pass motion to establish a new republic independent of Spain, as the opposition boycotts the vote...

“We constitute the Catalan Republic, as an independent and sovereign country, under the rule of law,”said the preamble to the resolution, read out by speaker Carme Forcadell before the ballot.

Twitter Ads info and privacy
What happens next is anyone's guess, but we suspect it will involve heavy police state intervention and the Franco-ian regime that separatists fear will rear its ugly head.
The Washington Post reports:

“The next move could be a formal declaration of statehood, less than a month after a referendum that backed the push for independence […]

If the Senate invokes the never-before-used Article 155 of Spain's 1978 constitution, the central government could move swiftly to remove the Catalan president, suspend his ministers and assume authority over the region's public media, police and finances.”

The Spanish government will undoubtedly now move swiftly to implement Article 155.
Spanish PM Rajoy immediately tweeted "I call tranquility to all Spaniards. The rule of law will restore the legality in Catalonia. MR"...

And blowing out relative to bunds...

*  *  *
Live Feed: Catalan Speaker reads the independence declaration before the vote...
“We constitute the Catalan Republic, as an independent and sovereign country, under the rule of law,” said the proposed resolution, read out by the speaker before the vote.


*  *  *
Update (0900ET): The Catalan Parliament confirms the secession proposal will be voted in a secret ballot. This immediately led to the PP MPs leaving the parliament chamber.
*  *  *
Update (0850ET): Catalan's opposition party members have just abandoned parliamnet as voting begins on minor resolutions (ahead of the big 'independence' decision) but Rajoy's PP remains in session. Additionally, the separatists have called for the ballot to be private.
*  *  *
Update (0820ET): CUP Deputy Carles Riera rages that the time has come to "build the republic in a context of fight and resistance."

“We propose that Catalonia becomes an independent state in the form of republic."

As Spain's prime minister urged the Senate on Friday to grant his government special constitutional measures that would allow it to take control of Catalonia's autonomous powers and halt the region's independence bid.
*  *  *
As we detailed earlier, after yesterday's chaotic Spanish event rollercoaster, when the Catalan leader Carles Puidgement was going to press ahead with independence only to change his mind, and propose elections, before reversing again and punting the independence decision to parliament, we hoped to get some further clarity on how he’s planning to proceed. Today, the chaos continues.
First, Bloomberg reported that Catalonia would seek approval for elections from Madrid:

The rebel government of Catalonia is making a last ditch effort to win concessions from Madrid. According to a person familiar with the matter, Catalan President, Carles Puigdemont, wants to convince supporters to accept regional elections instead of a declaration of independence. A senior Catalan official will ask the Spanish government to suspend the process of seizing direct control of the region if there is a snap election.

However, shortly afterwards, The Spain Report carried breaking news that the secessionists would debate a motion to declare independence in today’s session of the Catalonian Parliament.

Catalan separatist parties—Junts Pel Sí ("Together For Yes") and the CUP (Popular Unity Candidacy)—have registered a motion to declare the independence of Catalonia in the regional parliament.

A copy of the document published by Spanish media included the phrase: "We constitute the Catalan Republic as an independent sovereign democratic, social state of law".

The text would also approve the activation of the secession bill approved by the regional chamber at the beginning of September and voided by the Constitutional Court and "begin the constituent process".
* * *
The Speaker's Committee is currently deciding on which motions to accept for the second part of the session in the Catalan Parliament on Article 155, which is due to begin at 12 p.m.

At the same time, there are unconfirmed reports that police are closing off roads around the regional parliament.  Meanwhile, the Spanish senate has been debating the implementation of Article 155 in Madrid. Rajoy told lawmakers that Spain faced an exceptional situation and asked them to support his proposal on Article 155. The Spain Report shows video of Rajoy receiving a standing ovation. 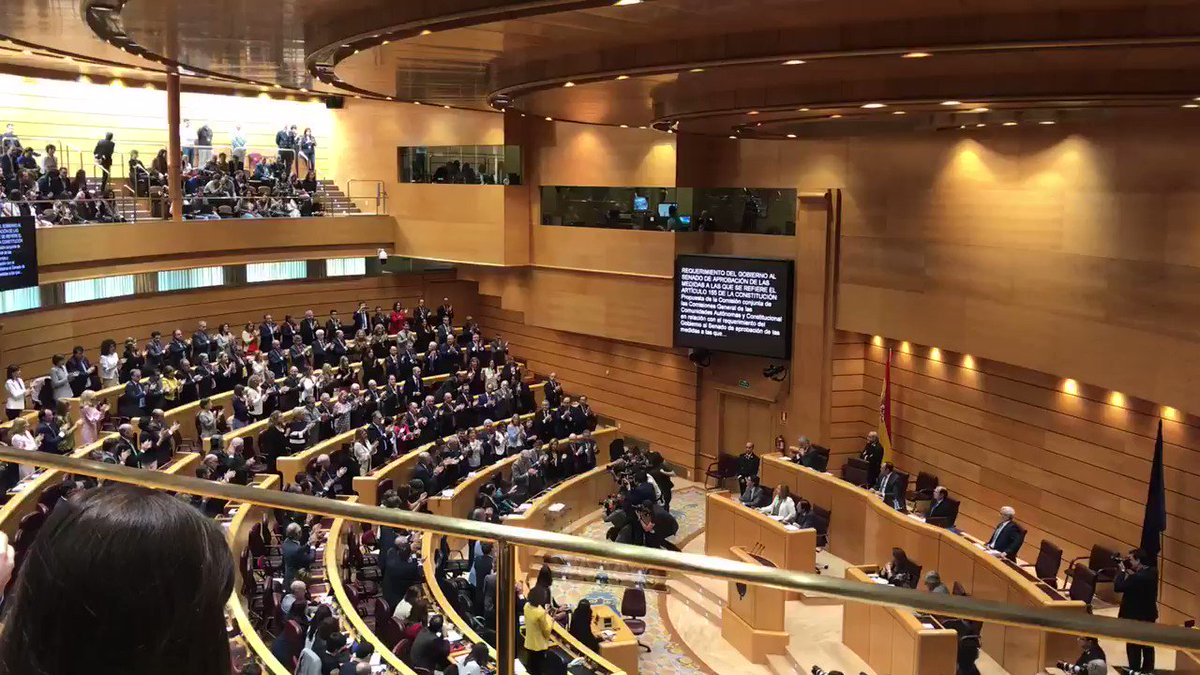 The Spain Report @thespainreport
Another video of the standing ovation for Rajoy in the Senate, from the visitors' gallery.
Via @pilarportero

Twitter Ads info and privacy
Here are flash reports from Bloomberg on the parliamentary debate in Madrid:
As Bloomberg reported this morning, Puigdemont has been running out of options.

Backed into a corner by his own hardliners and Rajoy’s refusal to give him a dignified way out, Catalan President Carles Puigdemont will address the regional parliament in Barcelona as demonstrators clamor for a declaration of independence. After a day of high drama that saw Puigdemont caught between the might of the Spanish state and the anger of the street, western Europe’s worst constitutional crisis for decades may be coming to a head with the separatist leader running out of options…

The day of confusion saw the president make a televised address after two postponements, lawmakers quit his party and a senior Catalan official jump ship, all while Spanish ministers were repeating their mantra that the Catalans must be brought to heel. The Spanish stock market posted its biggest gain since Oct. 5 only to pare the advance as events unfolded. Puigdemont said he had considered calling the regional vote, but he didn’t get the concessions he sought from officials in Madrid. "I tried to get the guarantees to carry out these elections, but didn’t get a responsible answer,” he said.

Last night, reports from the secessionist camp implied that independence would be declared.
"We are winning," Lluis Corominas, the head of Puigdemont’s PDeCat group, told lawmakers on Thursday night. "We should materialize the effects of the Oct. 1 referendum and implement them." That’s code for declaring independence. 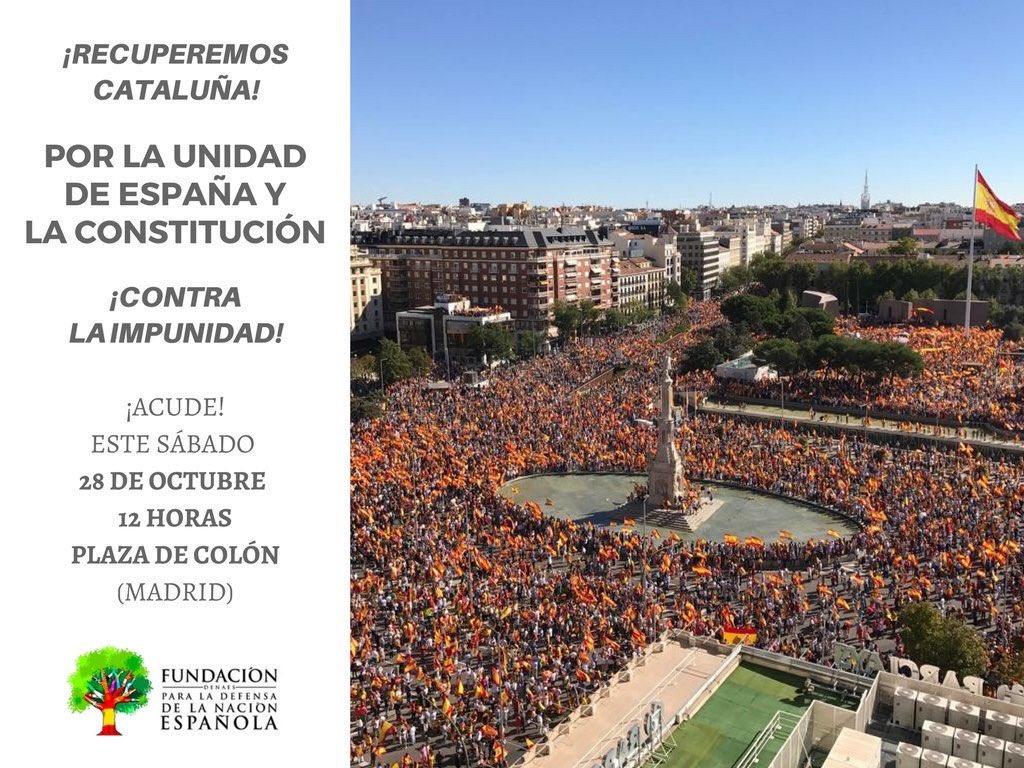