NZ: The RIght will be planning their coup

Fascism is live and well in this country and will be baying for revenge.

Right wing online forums are going to reach new levels of toxicity over the next 3 years. Someone really needs to monitor them. Yesterday Kiwibloggers were discussing and upticking the assassination of “terrorist” Winston Peters. There will be worse to come. 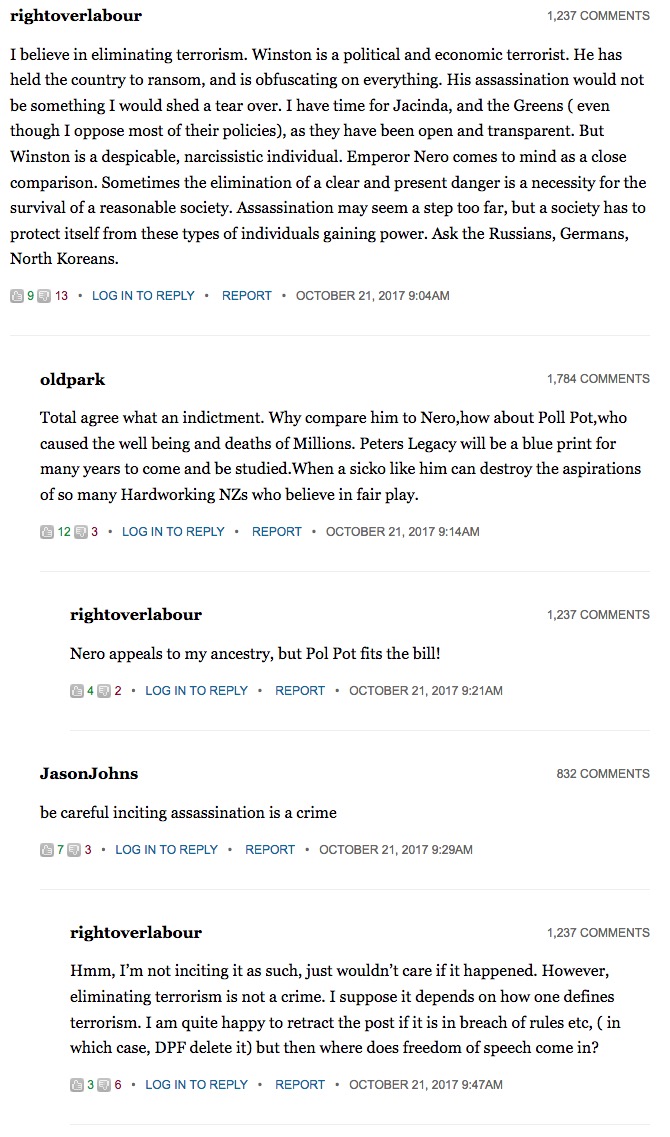 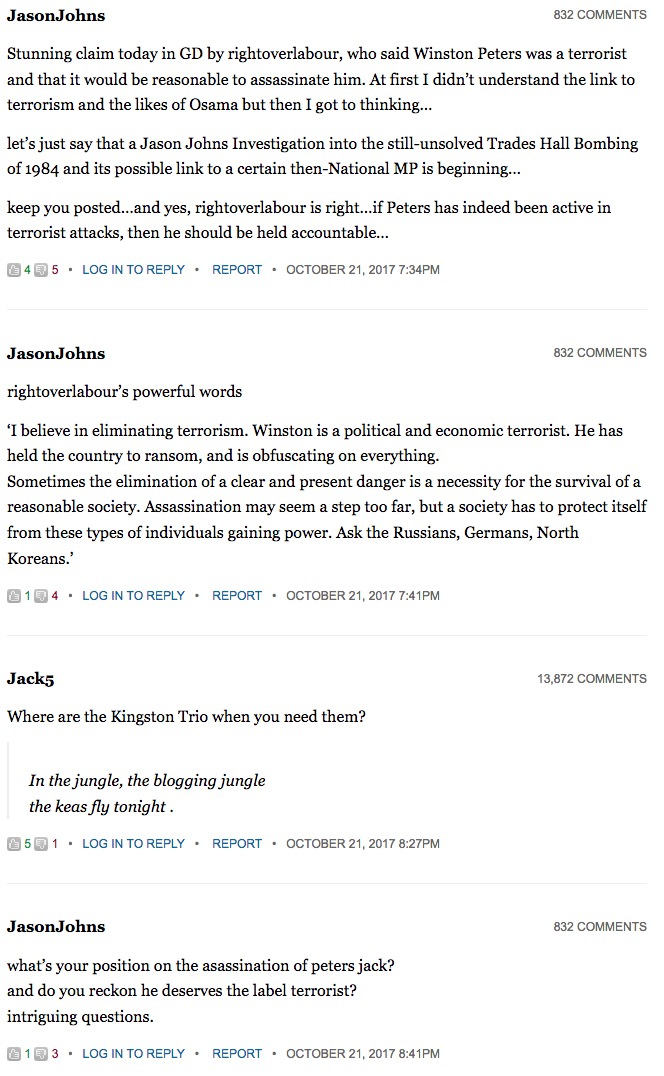 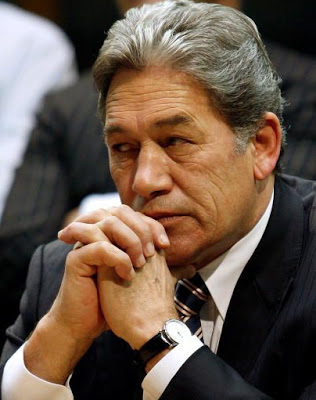 Navigator Of The Dark Side: Winston Peters, the man who broke the Winebox Scandal; wheeled and dealed with the big fishing companies; wined and dined the princes of New Zealand’s bloodstock industry; and took private calls on secluded New Zealand beaches from the US Secretary of State; knows better than just about any other New Zealander how the business of this world gets done.

IN ALL ECONOMIES, and in every political system, there are roped-off areas of shadow and hidden places swathed in deliberate darkness. In these light-starved locations all kinds of disreputable economic and political transactions take place.

If there’s one politician in New Zealand who is familiar, to the point of intimacy, with this unmapped and unacknowledged territory, it’s Winston Peters. The man who broke the Winebox Scandal; wheeled and dealed with the big fishing companies; wined and dined the princes of New Zealand’s bloodstock industry; and took private calls on secluded New Zealand beaches from the US Secretary of State; knows better than just about any other New Zealander how the business of this world gets done.

That Peters, with bitter personal experience of just how dark our politics can get, nevertheless persuaded NZ First to throw in its lot with Labour and the Greens, is astonishing. He must have known that the formation of a government unwilling to settle for “a modified status quo” but determined to usher in “real change”, would instantly mobilise all the initiators and beneficiaries of New Zealand’s neoliberal revolution against him.

Like Franklin Roosevelt before him, however, Peters appeared not to fear the enmity of the nation’s wealthiest and most powerful individuals and institutions, but to welcome it. Without the slightest hesitation, he lifted up the banner of resistance to the red-in-tooth-and-claw Capitalism that, since 1984, New Zealanders have grown to fear and detest:

“Far too many New Zealanders have come to view today’s capitalism, not as their friend, but as their foe. And they are not all wrong. That is why we believe that capitalism must regain its responsible – its human face. That perception has influenced our negotiations.”

Such an open declaration of war against the neoliberal establishment was bound to draw an equally belligerent response. And who better to lead the charge than one of the prime movers of the neoliberal revolution, Richard Prebble. Never one to mince words, Prebble began his opinion piece to the NZ Herald with the following, extraordinary, accusation:

“Let’s not beat about the bush: There has been a coup.

“The political scientists can tell us it’s legal but the fact remains - it is undemocratic. For the first time in our history who governs us is not the result of an election but the decision of one man.”

That there is not a word of truth in any of this (as Prebble, an experienced lawyer and politician must surely realise) matters much less than the deep emotional impression such an inflammatory charge is likely to make on all those New Zealanders bitterly disappointed to see the National Party denied the parliamentary majority it needed to remain in government.

What Prebble is setting up here is a politico-historical narrative alarmingly akin to the Dolchstosslegende – the “stab-in-the-back” legend concocted by far-right German nationalists to explain the Fatherland’s defeat in World War I. According to this “Big Lie”, the German army wasn’t defeated on the field of battle, but by the treachery of the “November Criminals” – Jews and Socialists – who signed, first, the armistice that ended the war, and then, the hated Treaty of Versailles, which imposed a Carthaginian peace on the German nation.

Prebble is nothing if not inventive – embellishing his delegitimising narrative with a vivid political metaphor drawn from Japanese history:

“New Zealand is now a Shogunate. In Japan the Emperor had the title and the Shogun had all the power.

“Jacinda has Premier House and Shogun Peters sets the policies.”

This is highly sophisticated political writing. Not only is Peters cast as the new government’s eminence grise, the power behind the throne, but the status of Jacinda Ardern, New Zealand’s new Prime Minister, is also reduced to that of a naïve puppet. It is “Shogun Peters” who gets to wield the real power.

As if Prebble’s historical musings weren’t insulting enough in themselves, they are heavy with an additional, if unspoken, menace. Those familiar with modern Japanese history know that in 1868 the Shogunate was overthrown by forces determined to restore the power of the Emperor by making him Japan’s ruler in fact as well as in name. In other words, although Peters is in no way guilty of staging a coup, Prebble, himself, is implying that should the new Labour-NZ First-Green Government be successful in installing an anti-neoliberal “shogunate”, a restorative coup-d’etat may be in order.

Prebble is quite explicit about how such coup might begin:

“I predict bureaucratic opposition to this government will be significant. It will start leaking from day one. Everyone knows this coalition of losers has no mandate to implement Winston Peters’ interventionist policies.”

None of this will come as any surprise to Peters. He has had to weather similar attacks many times before in his political career. To Jacinda Ardern and James Shaw, however, such reckless mendacity is likely to be received with a mixture of alarm and dismay. Both leaders are going to need Peters hard-won knowledge of how New Zealand’s “Deep State” operates if they are to mount an effective defence against the Neoliberal Establishment’s dark transactions.

And not only Peters’ protection will be needed. Every progressive New Zealander who understands the magnitude of the fight which Peters’, Ardern’s and Shaw’s decision to pursue “real change” has made inevitable, must be prepared to come to the aid of the three parties – Labour, NZ First and the Greens – which have committed themselves to fulfilling the hopes and dreams of the 50.4 percent of the New Zealand electorate who voted for them.

Richard Prebble: Jacinda Ardern will regret this coalition of losers