Wildfires in California and Portugal 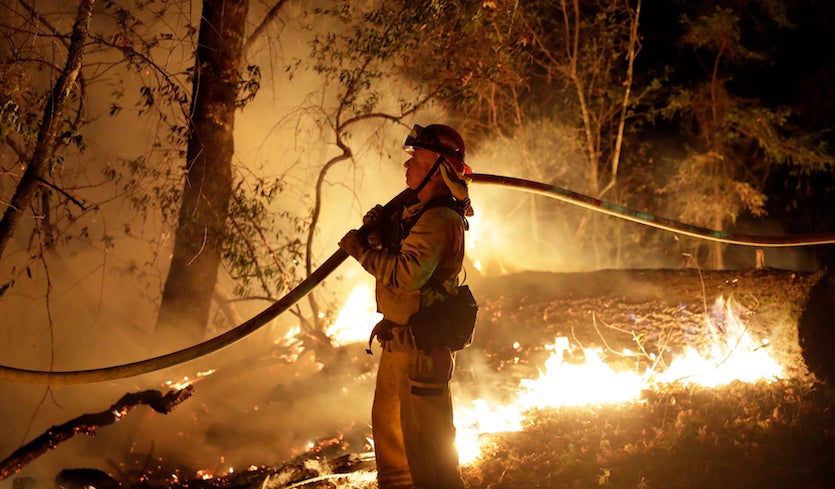 A record-breaking heat wave will build over Southern California over the weekend and peak on Tuesday, bringing triple-digit temperatures that could set marks for the hottest temperatures ever recorded so late in the year in the Los Angeles area. Accompanying the heat will be the notorious Santa Ana winds, which will bring a multi-day period of critical fire danger, Saturday through Tuesday.

According to NOAA, the hottest temperatures ever recorded after October 23 in Southern California (along with the Weather Underground forecast for Tuesday) were:

The heat wave and Santa Ana winds will be caused by a large near-record-strength dome of high pressure expected to settle in over the Great Basin, a few hundred miles northeast of Los Angeles. The difference in pressure between this high-pressure system and lower pressure over Southern California will drive gusty northeast winds over Southern California. Since these winds will originate over desert areas, they will be hot and dry. As the air descends from the mountains to the coast, the air will get hotter and drier, due to adiabatic compression—the process whereby the pressure on a parcel of air increases as it descends, decreasing its volume, and thus increasing its temperature as work is done on it.

As of 11 am EDT Friday, fire weather conditions are predicted by the NOAA/NWS Storm Prediction Center to be in the “elevated” to “critical” range Saturday through Tuesday across the coastal mountain ranges and foothills north of the Los Angeles Basin (fire weather alert levels come in three levels of severity: “elevated”, “critical”, and “extreme”.) Wind gusts of 35 – 50 mph will be capable of causing rapid spread of any fires that might ignite, though these winds will not be as strong as the ones that created the deadly firestorm in California’s wine country earlier this month. The fire danger increases through Tuesday, as the heat builds, and relative humidities below 10% are expected in many areas.

Conditions at night will not help firefighting efforts much, as temperatures will only cool down to the mid-70s, with low humidity and strong winds. By Wednesday, the heat and fire danger will begin to diminish as the Santa Ana winds die down and cooler, more humid air moves in, but temperatures will still be in the mid-90s in the Los Angeles area. Such a long period of extreme heat and Santa Ana winds mean that any fires that do ignite will be difficult to control and will potentially burn a large area.

The October 2017 wildfires: deadliest in California history and most expensive in world history

The death toll in California’s October 2017 wildfire event stands at 42, with 50 listed as missing in Sonoma County, and 4 in Napa county. This death toll surpasses the Griffith Fire in Los Angeles on October 3, 1933 (29 killed) as the deadliest fire in California history, and makes it the deadliest U.S. wildfire in 99 years. The last deadlier U.S. wildfire was theCloquet, Minnesota fire of October 12, 1918, which killed over 400 people.

According to insurance broker Aon Benfield, there have only been six billion-dollar fire events in modern world history, with the most expensive of these being the Oakland, California fire of 1991. California state officials estimate that the damage from the October 2017 California fires are already at $3 billion, and Aon Benfield stated that this total “was expected to grow as assessments remained ongoing, and the business interruption component continued.” This makes it likely that the October 2017 California fires will be the costliest wildfire event in modern world history. (A number of urban fires up through the 19th century—such as London’s Great Fire of 1666 and the Great Chicago Fire of 1871—were hugely catastrophic in terms of their impact on the societies and economies of their time, though.)

According to Thursday’s summary from Calfire, a total of 6,900 homes, businesses, and other structures were destroyed across northern and southern California. The fires have burned over 245,000 acres of land, bringing the total area burned in California this year to 1.1 million acres, the most since 2008. Nationally, 8.8 million acres have burned in 2017, says the National Interagency Fire Center, putting this year in fifth place for largest annual area burned since 1960. With over two months to go in the year, 2017 is likely to move up several places on that list.

Last Sunday, October 15, brought one of the worst fire disasters on record connected to a hurricane. As Hurricane Ophelia transitioned into a post-tropical cyclone and headed toward Ireland on a very unusual path, it pulled hot Saharan air across the Iberian Peninsula, which has been plagued for months by intense drought and record-hot temperatures. More than 400 fires broke out across Portugal and Spain on Sunday, killing at least 42 people in Portugal and another 4 people in northeast Spain. According to a report from the insurance broker Aon Benfield, satellite data indicate that more than 440,000 acres may have burned on Sunday across the Iberian Peninsula.

This was Portugal’s second wildfire catastrophe of the year. On June 17, a series of fast-spreading fires swept across parts of central Portugal. Though the fires were not as widespread as Sunday’s, they killed at least 64 people and injured more than 200, many of them trapped in their cars as fire swept across a roadway near the city of Pedrógão Grande. The June fire was the deadliest in Portugal’s history. All told, the fires of 2017 have consumed more than a half-million acres in what has been called the nation’s worst natural disaster in living memory. The Portuguese government has come under increasing pressure to boost the nation’s resilience to wildfire. On Wednesday, interior minister Constanca Urbano de Sousa resigned, stating “After this summer, nothing can remain the same as before.”

A warming climate is lengthening Portugal’s wildfire season and adding to the country’s vulnerability. Thomas Curt, of France’s National Research Institute of Science and Technology for Environment and Agriculture, noted after the June disaster: “During the last fifty years, the fire season, before reduced to July and August, is extended from June to October.” Much like California, Portugal experienced unprecedented summer heat this year. In data going back to 1931, the period from April to September and the month of September were both the hottest on record, according to the Portuguese Institute of the Sea and the Atmosphere (IPMA). Severe drought extended across 81% of mainland Portugal at the end of September.
Bob Henson co-wrote this post.

Posted by seemorerocks at 19:17