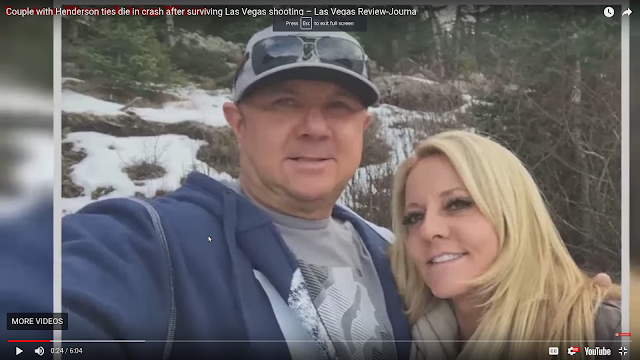 Inquisitr,
29 October, 2017
On October 1, Dennis and Lorraine Carver survived the deadliest mass shooting in modern U.S. history. The couple was part of the 20,000-strong crowd at the Route 91 music festival in Las Vegas, and when they heard the first shots rain down from the 32nd floor of the Mandalay Bay Hotel, the duo initially thought they were fireworks. According to their oldest daughter, Brooke Carver, the couple who would go on to survive the Las Vegas shooting had been line-dancing to Jason Aldean just moments prior to realizing that someone was shooting into the crowd.
Immediately after they realized that they were in the path of a deluge of bullets, 52-year-old Dennis Carver sheltered his wife, 53-year-old Lorraine, with his own body to keep her safe and sound as the couple fled the epicenter of the Las Vegas mass shooting. As Las VegasReview-Journal reports, the Vegas shooting survivors escaped the deadly attack that killed 58 and left hundreds more injured by running for their lives hand-in-hand. Neither Dennis nor Lorraine were wounded in the Las Vegas shooting.

“That’s just the kind of love they had for each other. Their love was selfless.”

According to the couple’s children, they returned home to their home in Riverside County, California just two days after the Vegas shooting, closer than ever, and more in love with life. The pair would get just over two more weeks to bask in the miracle of their survival before tragedy struck

Twenty-year-old Brooke Carver claims that her parents were happier than they had ever been after returning home, unscathed, from the Las Vegas mass shooting. She says they were “so happy,” and “living in the moment” after narrowly escaping the Route 91 concert with their lives. Then, on October 16, tragedy struck.

“After the shooting, they heard from all of the people they cared about most. They were so happy. The last two weeks of their lives were really just spent living in the moment.”

Just over two weeks after the Las Vegas mass shooting, Lorraine and Dennis Carver lost their lives in a freak car accident under a mile from their home. According to Madison, the couple’s youngest daughter, she was alerted that something was very wrong late in the evening of October 16. That’s when the 16-year-old says that she heard a “loud bang” from inside her home. She claims to have run out of the house and down the street to identify the source of the sound. When she turned the corner, Madison Carver saw her parent’s vehicle swallowed by flames roughly half a mile from the family’s home.

Twitter Ads info and privacy
Investigators say that the Las Vegas shooting survivors somehow crashed their vehicle into a metal gate at 10:50 p.m. The gate reportedly separated the Carvers’ community from the outside world, and the fire spawned by the crash was so hot and virulent that it took the Riverside County Fire Department nearly an hour to get it under control.
Investigators aren’t saying whether or not speed or intoxication could have played a role in the seemingly inexplicable car accident that appears to have caused an otherwise fully functional vehicle to burst into flames when coming into contact with a metal gate. However, social media has lit up with people wondering how something like this could have happened.
And whether or not it could be part of a bigger Las Vegas mass shooting conspiracy or cover-up. After all, the Carver’s aren’t the only Las Vegas survivors to have passed away under mysterious circumstances after the deadly October 1 attack. Survivor Kymberley Suchomel died in her sleep of reportedly natural causes just a week after the shooting. She was 28-years-old and had publicly claimed to have witnessed multiple shooters at the Route 91 concert before her death.

@marymauldin
What kind of vehicle BlowsUp in flames wh hits a community gate?
Couple dies in crash after surviving #VegasShootinghttps://www.reviewjournal.com/crime/shootings/couple-with-henderson-ties-die-in-crash-after-surviving-las-vegas-shooting/ …

@jenidawn
That is a good question...

A Couple who survived the Route 91 Music Festival dies in Car Crash near their home..... https://www.reviewjournal.com/crime/shootings/couple-with-henderson-ties-die-in-crash-after-surviving-las-vegas-shooting/ …

Twitter Ads info and privacy
Danny Contreras, another survivor of the Las Vegas mass shooting who described multiple shooters was also found dead earlier this week. As YourNewsWire reports, the 35-year-old took to social media days after the Route 91 shooting to tell a tale of multiple shooters at the venue. He was reportedly found shot multiple times and deceased in a vacant Las Vegas area home on October 28, after having tweeted out his claims of two shooters just days after surviving the Las Vegas mass shooting. His tweet was retweeted hundreds of times.

“Feeling lcky to be alive. cant beleive i got out of concert alive! 2 men chasing me with guns. not evry 1 so lcky.”

According to Lt. Dan McGrath of the Metro Police Department Homicide Unit, Las Vegas shooting survivor Danny Contreras may have had ties to local gangs or narcotics trafficking at the time of his death, which has been ruled a homicide.

Twitter Ads info and privacy
While many believe the deaths of Las Vegas shooting survivors Dennis and Lorraine Carver to be a horrible tragedy, particularly after their miraculous survival earlier this month, the couple’s daughters are looking on the bright side of their loss. According to Brooke Carver, witnessing her parents’ reaction to surviving the Route 91 attack provided “little pieces” that the family wouldn’t have gotten otherwise.

“We were so relieved when they got out of the shooting alive. But I also think we’ve been given little pieces of them that we would’ve never gotten if the shooting hadn’t happened right before they died.”

One such little piece? Seeing their father send flowers to their mother without a special occasion after the Las Vegas shooting. Another? Getting their hands on the cell phone their father lost while fleeing the Route 91 festival for his life – and the life of his wife. The phone had been found by an FBI agent during the investigation, and that agent shipped the phone to the family home – it arrived just days after Lorraine and Dennis Carver’s fatal car accident.


“When we turned it on, all his photos and messages were still there,” Brooke said. “This is how we know they’re looking down and watching over us.”

LAS VEGAS – The mother of a Las Vegas police officer killed in the October 1 mass shooting died just days after the funeral from a broken heart, family members told KNTV.


“It was a real nice service, but it has been hard,” Lewis Stiles said about his nephew’s funeral.


Officer Charleston Hartfield’s family was already struggling with his death in the deadly attack, but days later they are grieving again after his mother, Sheryl Stiles, died just two days after his funeral.


“To die out here at the same time she’s come to her own son’s funeral is devastating,” Cecil Ralston said.


Stiles’ family says they believe she had a heart attack while on an escalator at her hotel over the weekend.


The family says she suffered brain damage in the fall and died Sunday.


They are still waiting for an autopsy to be completed.


Many of the family members say it was clear she died of a broken heart, describing her as very solemn during Officer Hartfield’s funeral service.


“She just kind of froze. She was standing there looking at me,” Stiles said.


Now as they work to make funeral arrangements for a second family member, the family is learning Hartfield’s mother told a chaplain just days earlier that she was ready to be reunited with her son.


“She told him that she wanted to be with her son, this was at the funeral,” Ralston said.

While the family was originally struggling to find the money to cover the funeral expenses, they say groups have stepped up to cover the costs as word spread of the death.+