STRANGER THAN FICTION: Why Is Foundation of Vegas Shooting Survivor Sponsored By DHS Linked Firm?

When looking at the deeply entangled mystery surrounding the Las Vegas mass shooting, there’s been no shortage of questionable details and information that just doesn’t add up.


You know the old adage, truth is often stranger than fiction… 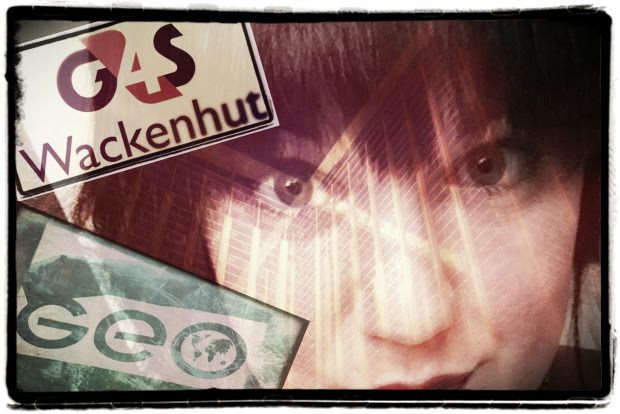 The shooting involving the Las Vegas Mandalay Bay Resort and Route 91 Harvest Festival, has ushered in the brutal return of politicized mass tragedy in America. The dramatic nature of the surreal as of yet still motiveless crime, only adds to a traumatic event that is now being described as “the 9/11 of Mass Shootings.”

Similarly, over this past week, a story of concerning the sudden tragic death of a Las Vegas shooting survivor sent shock waves through both mainstream media and alternative media like. 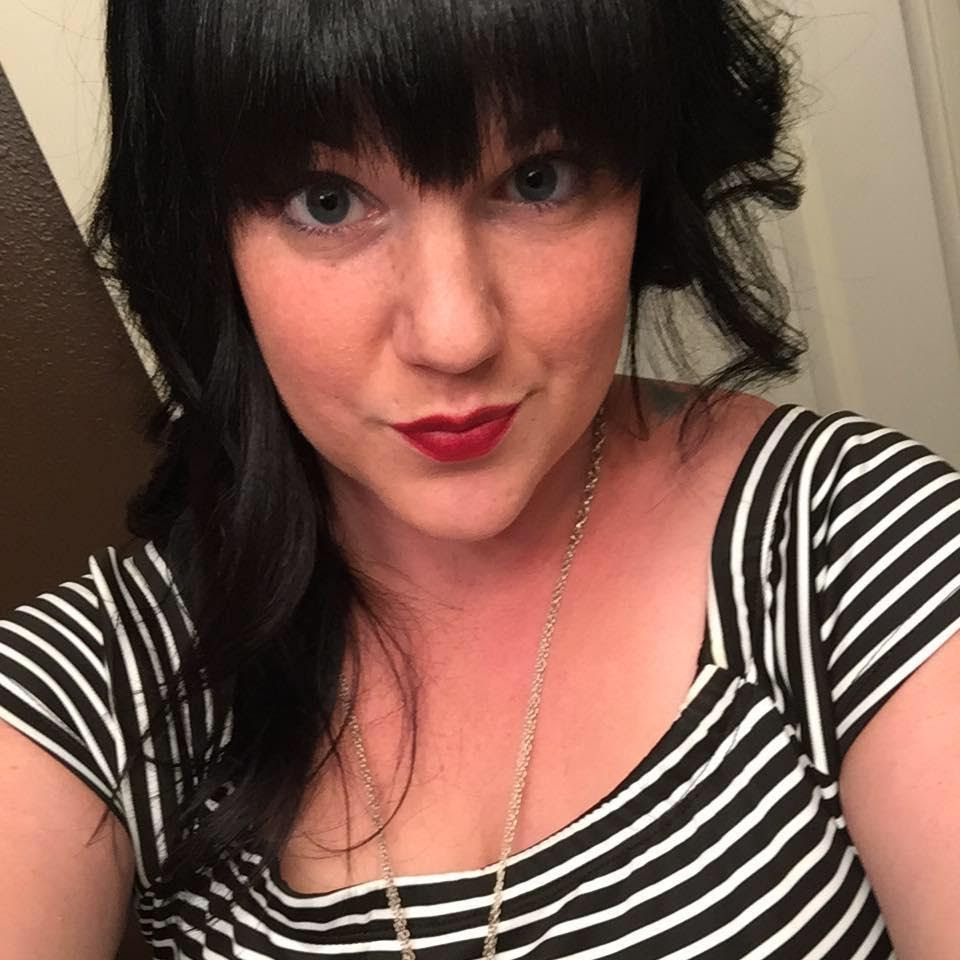 As a chorus of gripping media reports detailed the unexpected death of 28 year-old Kymberley Jo (Synder) Suchomel (left photo Daily Press) in the days after the Las Vegas mass shooting, those still in search of answers in the aftermath of the tragedy were left captivated by her tale.

By now, many may already be familiar with media accounts of Suchomel’s harrowing tale of survival, who along with close friends, was said to have attended the Route 91 Harvest Festival the night of the Las Vegas shooting massacre.

As the untimely circumstances of Suchomel’s death have been conflated with the unexplained events in Las Vegas, many in alternative media have hastily assumed that the young fund raiser’s death was somehow linked to her dispute of the Las Vegas mass shooting storyline via social media posts on a Facebook account associated with her. Subsequently, online interpretations of the Suchomel story have led to a digital firestorm on social media, producing a wave of speculation prior to a more complete analysis of the survivor’s tale.

Despite sensationalized reportage, at this time, there’s no concrete evidence to prove a social media-based conspiracy concerning the death of Suchomel…
According to the original story first published by the Daily Press, we’re told Suchomel died in her sleep as she was said to have suffered from epilepsy and had been “prone to seizures.”Additionally, Suchomel, who was reportedly taking medication for a pituitary tumor, was discovered dead by her grandmother Julie Norton at 8:30am on October 9th at her Apple Valley, California home. At this moment, an autopsy of Suchomel’s death is still pending.

QUESTION: Is it possible that ‘open source investigators’ were being led into a virtual cul-de-sac and thus missing the real story? 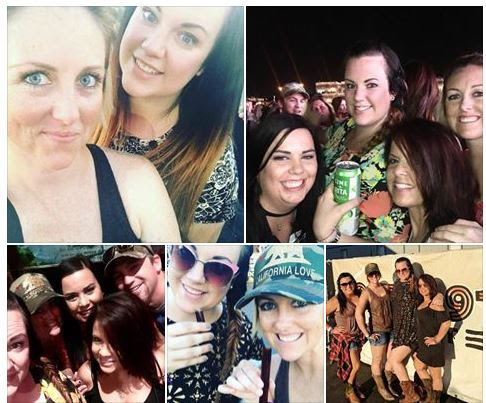 Undoubtedly, the uncanny timing of Suchomel’s death has come on the heels of a brewing controversy over the Las Vegas mass shooting. This has led to increased speculation, turbo-charging even more spurious internet-based conspiracies and allegations. These now viral stories have simultaneously been published, as anonymous survivor claims from those close to Suchomel have presented Facebook messages associated with her account. Suchomel’s claims also allude to multiple shooters involved in the Las Vegas shooting, as she allegedly planned to “organize a group of survivors,” and that “The media can suck it. They have no idea what went down!”

While Suchomel’s story is compelling, you have to wonder – is there more than we’ve been told?

At face value, Suchomel’s public account of the Las Vegas shooting is persuasive and does appear to question the official narrative. However, one should look at information from multiple angles in order to formulate a more full spectrum understanding of complex multilayered criminality.

*UPDATE* – Below are two screen shots associated with a Linkedin profile under the name of Kymberley Suchomel. We at 21WIRE cannot verify if this profile is connected in anyway to the Las Vegas shooting survivor or not, but several similarities in the appearance of the individual, home location and the inclusion of an aero-space industry government contractor Aero-Zone, along with others, raises some serious questions… 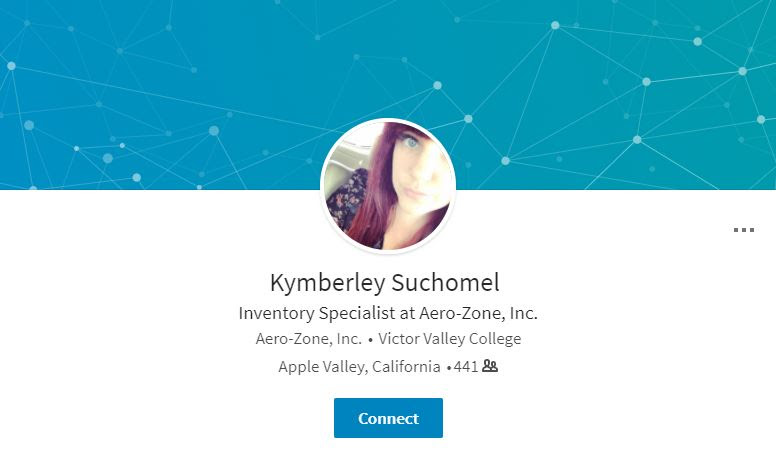 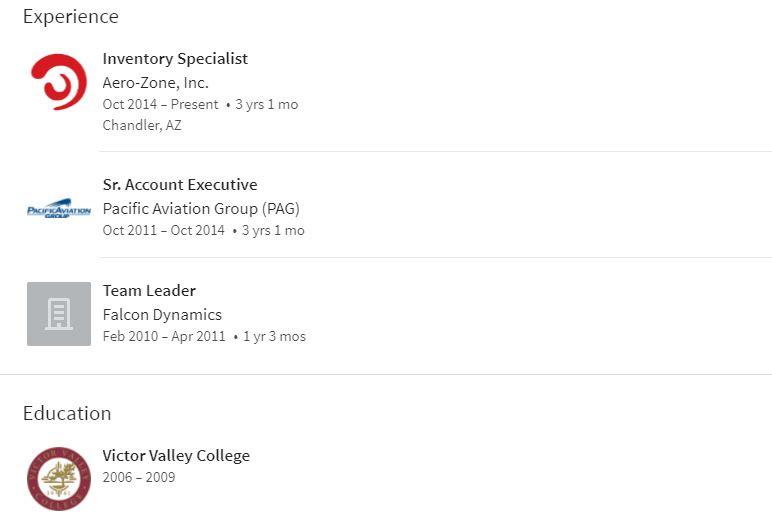 The inclusion of the above Linkedin profile is not necessarily an endorsement of a larger conspiracy concerning the Suchomel saga. However, the Linkedin revelations above have surfaced at or around the same time as other government contractor links have been uncovered regarding the Las Vegas shooting survivor’s charitable foundation. (see below)

QUESTION:Is the Linkedin profile above a ruse, someone else – or another mysterious part of the Suchomel story?

SEE ALSO: The Las Vegas Mass Shooting – More to the Story Than We’ve Been Told

Although the police dispatch communication, along with eye-witness testimony reveals some startling information contradicting the official story surrounding the Las Vegas mass shooting, one must be cautious when looking at all of the available evidence of a suspicious crime – however difficult that may be.

As larger outlets in alternative media such as Infowars have sensationalized this highly emotive aspect of the Las Vegas tragedy, a series of formulaic polarizing political points have become an echo chamber in its aftermath. This type of conjecture rapidly descends into wild speculation only serving to magnify emotionally driven elements of a particular story, something that could be used to deliberately steer public perception away from any potential forensic clues.

It’s important to remember that during same time SITE Intelligence injected an ‘ISIS meme’ into the Las Vegas tragedy without revealing any solid evidence, Infowars quickly followed suit. This then prompted an apparent ‘official’ statement that echoed those dubious claims from the terror group ISIS. Although these claims still linger, they’ve failed to produce any real connection to ISIS.

As we’ve noted numerous times here at 21WIRE, the intelligence monitoring group called SITE, has ties to both the CIA and Israeli intelligence. The group has also had ethical concerns raised over the nature of their intel gathering in the last decade and according to the group’s founder, Rita Katz – they’ve managed to release terror related material linked to ISIS prior to the group itself.

What you’re about to see below, is a collection of material revealing what appears to be a rather incredible financial component connected to the High Desert Phoenix Foundation, a charitable organization co-founded by the recently deceased Las Vegas mass shooting survivor Kymberley Suchomel.

The High Desert Phoenix Foundation claims to have raised funds for grieving families affected by trauma since 2008. This amazing coincidence, rather incredibly, has not been mentioned once in any of the conspiratorial claims surrounding the Suchomel story at alternative media outlets. Put another way, a survivor of a traumatic event has been a long time co-founder of a foundation that contends to have helped those who have endured a traumatic tragedy themselves. It’s a difficult question to ask  – but what are the chances of this uncanny coincidence?

In recent years, controversy has enveloped the multi-billion-dollar corporation known as Geo Group. Critics of GEO Group contend that politically motivated contributions have led to an expansion of its for-profit prisons system through federal, state and government contractual agreements at the expense of public safety. Even more concerning, is that critics argue that GEO Group has fostered a dangerous work environment via it’s under staffed operations, inadequate training and apparent mistreatment of detainees and other inmates. This has led to a potentially volatile situation for communities nearby GEO Group’s facilities.

QUESTION: Does this sound like a suitable donor for a charitable foundation known for helping grieving families?

In 1984, Wackenhut Corrections Corporation (WCC) had been formed as a part of The Wackenhut Corporation. In 2003, WCC management bought up all stock held by its subsidiary G4S, altering its name to The GEO Group, Inc.

In 2004, other divisions of the Wackenhut Corporation were purchased by Group 4 Falck, a security focused subsidiary known as G4S Wackenhut, was later renamed again as G4S Secure Solutions.

Here’s a screen shot of the High Desert Phoenix Foundation’s mission statement. Notice the modest look of the website – an organization with the financial backing of the multi-billion dollar GEO Group, one of the nation’s largest for-profit prison operator… 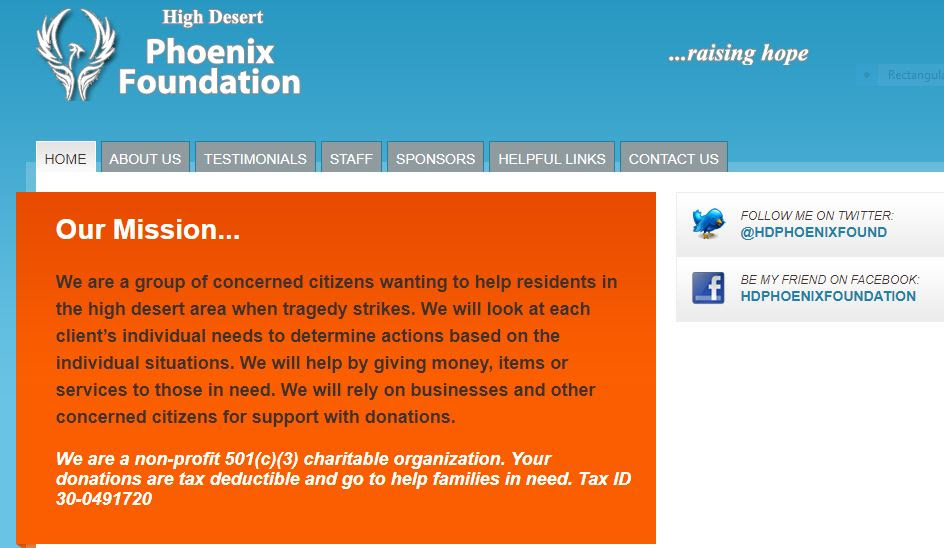 The reason why the GEO Group link is so significant, is that prior to modern America’s largest mass shooting in Las Vegas, an apparent survivor of the incident was operating a foundation that was accepting financial support from a large-scale company formerly known as The Wackenhut Corporation, a subsidiary of G4S Secure Solutions, one of the world’s largest security firms, and a Department of Homeland Security connected conglomerate tied to the suspicious Orlando shooting in the summer of 2016 – an event, that was previously the country’s largest mass shooting.

If you remember, 29-year old Omar Mateen, an Afghani-American was located in Port St. Lucie, Florida, about 120 miles outside of Orlando. In 2013, Mateen was placed under a terror watch list for 10 months (interviewed two to three times by the FBI 2013-14) and had worked for G4S Secure Solutions, headquartered in Jupiter, Florida, a company which was formerly part of a CIA-linked government contractor and security firm known as The Wackenhut Corporation.

G4S, as it turns out, was the very first ‘designated’ and certified Department of Homeland Security (DHS) contractor and recently secured a $234 million dollar contract with the federal cabinet department. In addition to apparently providing security solutions for “90 percent of U.S. nuclear facilities,” G4S, according to border patrol sources has also been tasked with the transportation and release of illegal immigrants inside the interior of the United States. At least one of Mateen’s roles with G4S, was to transport and provide security for prisoner youths in Florida.

The amount of independent examination regarding the Las Vegas shooting case thus far is fairly staggering and in the wake of any multilayered event, one must proceed with caution when reviewing the available evidence, as the doorway for a ‘trial by media’ frenzy in both mainstream media and alternative media could be used to derail sincere analysis.

What should the public make of the the High Desert Phoenix Foundation’s long time financial links to a high-profile government contractor?
All of this comes, as the Las Vegas shooting star witness, Mandalay Bay security guard Jesus Campos resurfaced to appear in what the public has been told will be his only media appearance to discuss this bizarre and highly questionable case.

It’s also worth mentioning that Campos failed to shed any more light on the shifting timeline of events associated with the Las Vegas mass shooting. Watch Campos ‘break his silence’ in an interview that appeared on Ellen… 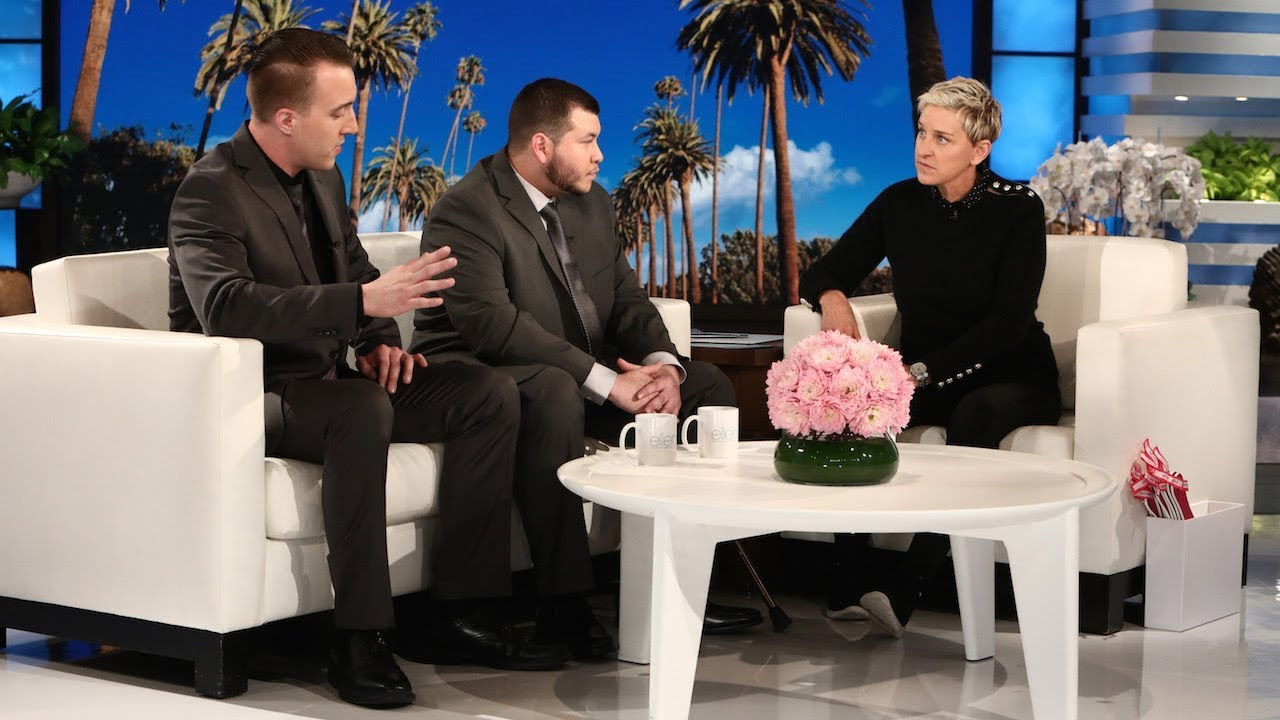 Stay tuned for any updates to this story…

21WIRE associate editor Shawn Helton is a researcher and writer, specializing in forensic analysis of high-profile crime scene and counter terrorism investigations, and the deconstruction and analysis of the mass-media coverage surrounding those cases. He has compiled an extensive body of work covering a number of high-profile events since 2012.