Neither the EU nor the mass media has any problems with Spanish fascism
‘Fake pics, limited use of force’: Spanish FM downplays police violence during Catalonia vote 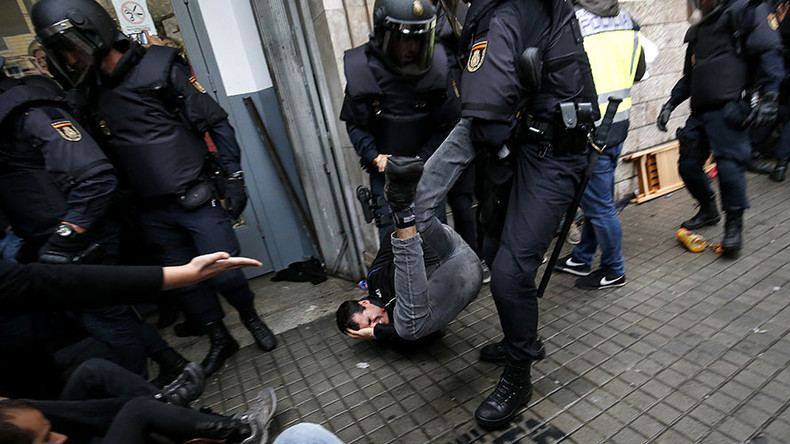 Spanish police used only “limited force” against Catalonians during the October 1 independence referendum, Spanish Foreign Minister said in an interview with BBC, claiming that many pictures showing police violence were “fake.”

“I don’t think there [was] any brutal situation,” Alfonso Dastis told the BBC’s Andrew Marr Show, speaking about clashes between police and Catalans on the day of the vote.

“Many of those pictures [showing police violence] have been proven to be fake,” Dastis said, “If there was a use of force, it was a limited one.”

While admitting not all of the footage could possibly be manipulated he insisted that “but some of [the pictures] are,” adding that “there have been a lot of alternative facts and fake news” about the independence referendum.

Thousands of extra officers from the National Police and Civil Guard were deployed to Catalonia amid tensions over the independence vote. The vote was held October 1, despite Madrid calling it “unconstitutional.” The police crackdown during the vote resulted in over 800 people being injured across the region, according to Catalonia’s Health Department.

Shortly after the referendum the Human Rights Commissioner of the Council of Europe contacted the Spanish Interior Minister, seeking “swift, independent and effective” investigations into allegations of disproportionate use of force by the police.

In the meantime, Madrid insists that the actions of Civil Guard and National Police were “prudent, appropriate and proportionate to the objective of ensuring compliance with the law and the rights of all citizens.”

Catalan President Carles Puigdemont immediately criticized Madrid’s move. He compared the imposing of a direct rule on Barcelona "the worst attack against the institutions and the people of Catalonia since the military dictatorship of Francisco Franco.”

In Madrid, Spanish Prime Minister Mariano Rajoy appeared to have the support of the locals as he announced measures to suspend Catalonia's administration and hold new elections over its secession bid, which Madrid has said is illegal.

Catalonia's President Carles Puigdemont accused Madrid of attacking the region's democracy and angry Catalans took to the streets in protest in the Catalan capital, Barcelona.