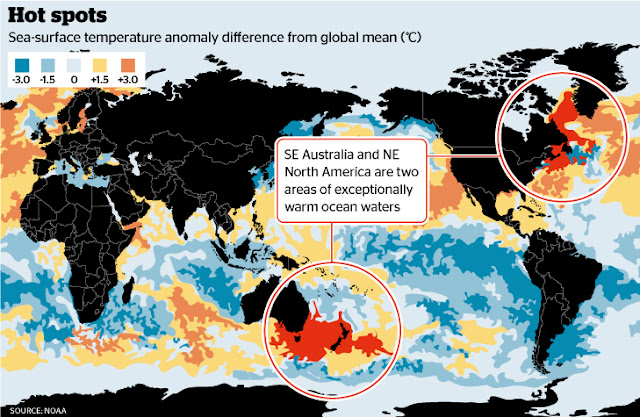 Australia is home to a global hot spot for sea-surface temperatures, with a record burst of prolonged heat in the country's south-east helping to make conditions several degrees warmer than average.

Daily weather charts generated by the US National Oceanic and Atmospheric Administration show the unusual warmth is almost unmatched around the world, compared with normal temperatures.

Only patches off Greenland and New York in the US are as abnormally warm compared with long-run averages. (See chart above.)

"It's clear sea-surface temperatures around south-eastern Australia, and Tasmania in particular, are well above average," Blair Trewin, senior climatologist for the Bureau of Meteorology, told Fairfax Media.

As sea-surface temperatures typically lag a couple of months behind land ones, the waters may not feel especially warm for those braving an early season dip.

Still, the current prolonged hot spell over much of the country's south-east would be having an affect in areas of shallow water and limited mixing, Dr Trewin said.

Melbourne on Saturday notched its sixth day in a row of 30 degrees or warmer conditions, equalling a mark set in 1896.

The city is forecast to have a 29-degree maximum on Sunday, with the timing of the arrival a cool change to determine whether the record bar is lifted.

Andrew B Watkins‏ @windjunky
Would you believe... some parts of Port Phillip are now over 20°C! Average in the last week of November is 17°C #bayheatwave (Sydney seas current 19°C) http://www.baywx.com.au/sst1.html 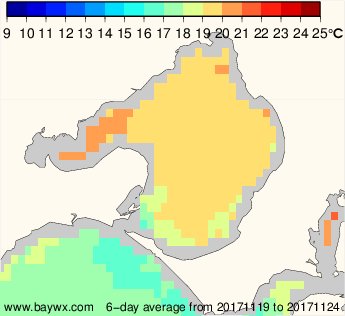 Melbourne has also set a record for 12 nights in a row above 15 degrees, with a tally that could extend for another six nights on current forecasts.

Hobart, meanwhile, broke a November record for the number of days reaching 25 degrees in a row, with six such days notched up to Thursday. The tally equalled the number for any time of the year.

The cause of the prolonged warmth was a large blocking high in the Tasman Sea, which has meant conditions further up the east cost have been close or even below average.

Sydney's daytime temperatures have largely been within a narrow range, and will likely remain so for another week. Most days will reach 26-27 degrees, with most overnight temperatures dipping to 20 degrees.

The city may collect seven days above 25 degrees, which would be Sydney's longest such spell in November in 49 years. It has, though, posted three such runs in September or October over that period, Dr Trewin said.

The ocean temperature off Sydney was 21 degrees on Saturday, according to Beachwatch.

While waters around south-eastern Australia may be unusually warm for this time of year, abnormal warmth is becoming more the norm as climate change overwhelms natural variation.

Average sea-surface temperatures around the nation have not posted a cooler-than-average year for more than two decades, and in 2016 set a new annual record.

Temperatures were more than 0.7 degrees above the 1961-90 average, bureau data showed. (See chart below.) 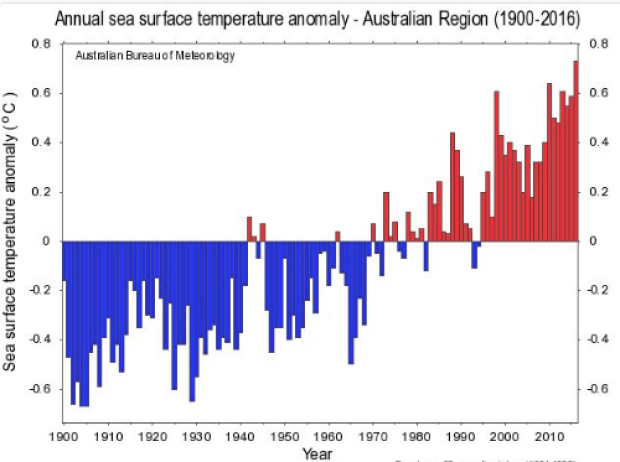