"Saudi Arabia doesn’t have a regime, it has “leadership.” Unlike adversary governments, often seen in need of “regime change,” the Saudi government merely requires “reform”—and a bold new “reformer,” of the sort championed by the likes of the Guardian and New York Times."

(FAIR) — Two weeks ago, Saudi Crown Prince Mohammed bin Salman carried out a brutal crackdown on his political opponents, arresting dozens of high-ranking relatives, kidnapping the prime minister of Lebanon, and seeing eight of his political rivals die in a convenient helicopter crash. The “consolidation of power” by the de facto Saudi ruler comes as his government ramps up its siege of Yemen and gets even closer to its US sponsor, thanks to a Trump’s dopey love affair with—and direct assistance of—the regime.


The cynical plan has been met, in some media quarters, with condemnation, but for many in the Western press, Mohammed’s self-serving power grab is the action of a bold “reformer,” a roguish bad boy doing the messy but essential work of “reforming” the kingdom—the “anti-corruption” pretext of the purge largely repeated without qualification. The most prominent sources for this spin were two major newspapers, the New York Times and Guardian:

While the text of the Times articles was far more skeptical about Mohammed’s motives, the Guardian’s (11/5/17) initial coverage of the bloody purge—not just the headlines—was written in breathless press release tones:

“Saudi Arabia’s leadership has pulled off its boldest move yet to consolidate power around its young crown prince, Mohammed bin Salman, arresting 11 senior princes, one of the country’s richest men and scores of former ministers in what it billed as a corruption purge.

The move sidelined at least 20 senior figures, among them outspoken billionaire, Prince Alwaleed bin Talal, sending shockwaves through the ranks of the kingdom’s elites, who had long viewed senior royals as immune.”

Lot of glowing prose to unpack here. Longtime Mideast correspondent Martin Chulov began by referring to “Saudi Arabia’s leadership,” which is a nice, sterile way of referencing the country’s unelected hereditary king and crown prince. Then he pivoted into marketing pablum about “bold moves” and “consolidating power,” before unironically framing the purge as an “anti-corruption” gesture designed to stick it to the “kingdom’s elites.” One could come away from reading this lead with the impression that the billionaire aristocrat was a populist folk hero in the vein of Robin Hood or John Dillinger. The thrilling profile continued:

“Prince Mohammed will oversee the corruption commission, adding to his already formidable list of responsibilities, including his role as Defense minister and champion of the economic transformation, dubbed Vision 2030, that aims to revolutionize most aspects of Saudi life within 12 years.

Prince Mohammed told the Guardian last month that the kingdom had been “not normal” for the past 30 years and pledged to return Saudi Arabia to moderate Islam.”


While the author had a “to be sure” paragraph, citing “others” calling it a “naked attempt to weed out dissent,” the overall thrust of the article was that a roguish billionaire Boy King was earnestly seeking “reform” and opposing “elites.”

A follow-up piece (11/7/17) took flattering coverage to new extremes. The dispatch, again by Chulov, cited nothing but anonymous Saudi court hanger-ons and a Gulf-funded talking head from the NATO-aligned Atlantic Council think tank.

The article, “‘This Is a Revolution’: Saudis Absorb Crown Prince’s Rush to Reform,” was populated with blind quotes from such adversarial voices as a “senior minister,” “a senior Saudi official,” a “senior figure,” a “senior Saudi businessman” and “veteran business leaders.” (Evidently no junior officials or rookie business leaders were available for comment.)

The article painted the “consolidation of power” by Mohammed as an inevitability with broad support—using the dubious “reform” narrative without irony. With Guardian editors again painting Mohammed as a populist hero by insisting he “upended” “previously untouchable ultra-elite,” one is left to wonder why they don’t consider the absolute-monarch-in-waiting—who just bought a $590 million yacht—part of the “ultra elite.” It’s a curious framing that reeks more of PR than journalism.

This was a trope one could see emerging over the past few months. Similar “bold reformer” frames were used in New York Times editorials (“The Young and Brash Saudi Crown Prince,” 6/23/17) and straight reporting (“Saudi Arabia’s Grand Plan to Move Beyond Oil: Big Goals, Bigger Hurdles,” 10/24/17). Everything’s new and exciting. The brutal, routine functions of the Saudi state are seen as laws of nature—and those in charge of it are the reformers of the very oppression they initially authored.

A Guardian editorial on November 7 was critical of the government, calling it “regressive” and Mohammed “belligerent,” but ultimately rested on “both sides” framing of recent events. The only meaningfully critical coverage of Saudi Arabia coming from the Guardian since the purge has been in two articles (11/12/17, 11/16/17), both in the context of Saudi Arabia’s war on Yemen. Neither mentioned bin Salman, and both stressed how the Saudis are responding in earnest to international pleas to stop their mass-murdering blockade of the Arab world’s poorest country.

Per usual, the Guardian reserves the label “regime” for Official Enemies like Syria and North Korea; Saudi Arabia doesn’t have a regime, it has “leadership.” Unlike adversary governments, often seen in need of “regime change,” the Saudi government merely requires “reform”—and a bold new “reformer,” of the sort championed by the likes of the Guardian and New York Times.

IN YEMEN’S “60 MINUTES” MOMENT, NO MENTION THAT THE U.S. IS FUELING THE CONFLICT 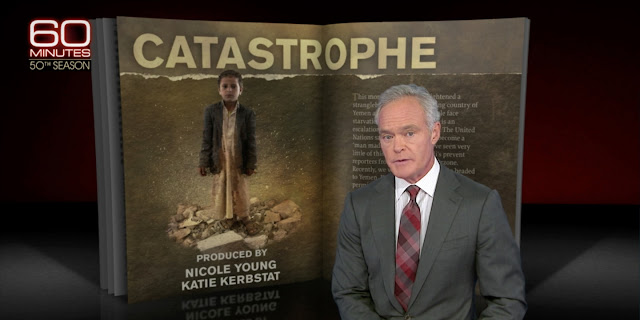 SAUDI ARABIA’S YEARS-LONG blockade and bombing campaign in Yemen has gotten very little coverage in the United States, even as the extreme food and fuel shortages have developed into one of the world’s worst humanitarian crises.

Now, as the Saudi noose on Yemen tightens — leaving 7 million people facing starvation and another 1 million infected with cholera — the war is having its moment in the media spotlight.

On Sunday, “60 Minutes” aired a 13-minute segment on the war’s devastating humanitarian toll. The program featured imagery of starving children and interviews with displaced people, all obtained after Saudi Arabia blocked “60 Minutes” from entering the country.

“You keep going like you’re going, there’s not going to be anybody left,” David Beasley, executive director of the World Food Program, told CBS’s Scott Pelley. “All the children are going to be dead.”

Coverage on such a high-profile program is frequently enough to get politicians to pay attention to an issue, and the “60 Minutes” feature comes amid a growing debate about the U.S. role in the war. Just last week, the House of Representatives voted to say that Congress has not authorized American military support for the Saudi-led coalition.

Still, the program did not once mention that Saudi Arabia is a U.S. ally, and that U.S. support is essential for the Saudi campaign to continue.

Email ThisBlogThis!Share to TwitterShare to FacebookShare to Pinterest
Labels: Saudi Arabia, the Guardian