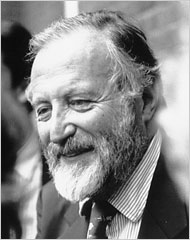 A man ahead of his time: an appreciation of Edward Goldsmith

My first lessons on the impossibility of infinite growth on a finite planet came when I encountered Paul Ehrlich and the Population Bomb when I was at school in the early 70’s.


Next came an article in the Bangkok Post in 1988 which was the first mention of what was called the Greenhouse Effect (which I was already familiar with from studies in astronomy and of Venus’ atmosphere) that I came across. This had such an effect on me that I went to the NZ Embassy to check the newspapers to find the only mention was on the possible effects on the ski industry.


Fast forward to March, 1988 and my partner Pam travelled to Auckland for a seminar while I remained home bound in the midst of a terrible storm. The only high point was hearing an interview with Edward Goldsmith on NZ’s National Radio in which I heard for the first time the stark message that humanity had only 40 years to get its act together if it was to avoid inevitable extinction.


This made such an impression on me that has stayed with me through the years that I decided to go and search for the newspaper item in the public record which I eventually found.

As it turns out it made the top of the front page of the paper – for what I suspect was the first and mostly probably the last time in New Zealand media.


Looking back at all the material about him on the Net I realised Edward Goldsmith has attracted almost as much negativity and controversy as Guy McPherson, mostly, I suspect because of his strong anti-growth position. But for me he was one of the most inspiring figures I have met.


He was the publisher of the Ecologist magazine in London and winner of the Right Livelihood Award, often referred to as the alternative Nobel award. He is considered one of the fathers of the global environmental movement.

Here is the item that was on the front page of the Dominion on 27 March, 1989.  Published almost 3 years before the Rio conference and before Kyoto when global warming was referred to be the mechanism, the Greenhouse Effect this was perhaps the first, and almost certainly the last time that scientific concepts such as the Gaia hypothesis were given such prominence in the mass media.

Reading this I feel a real grief,not only in terms of the 'road not taken' but for what we have lost in the last 30 years. It is a reminder that we have lost the art of journalism and proper use of language in even an ordinary newspaper article.

When was the last time you saw these concepts discussed on the front page of a national newspaper? 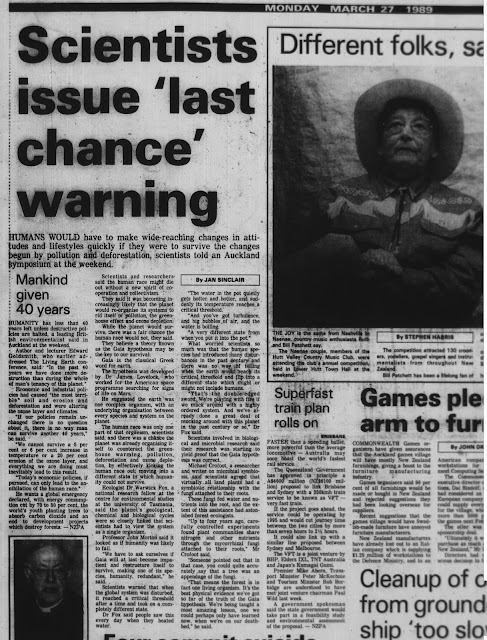 Humanity has less than 40 years left unless destructive policies are halted,a leading British environmentalist said in Auckland at the weekend.

Author and lecturer Edward Goldsmith, who earlier addressed the Living Earth conference said: “In the past 40 years we have done more destruction than during the whole of man’s tenancy of this planet.

Economic and industrial policies had caused “the most terrrible” soil and erosion and deforestation and were altering the ozone layer and climates.

He wants a global emergency declared, with energy consumption cut by 70 to 80 per cent, the world’s youth planting trees to absorb carbon dioxide and an end to development projects which destroy forests - NZPA

Humans would have to make wide-ranging changes in attitudes and lifestyles quickly if they were to survive the changes begun by pollution and deforestation, scientists told an Auckland symposium at the weekend.

Scientists and researchers said the human race might die out without a new spirit of co-operation and collectivism.

They said it was becoming increasingly likely that the planet would re-organise its systems to rid itself of pollution, the greenhouse effect and ozone depletion.

While the planet would survive, there was a fair chance the human race would not, they said.

They believe a theory known as the Gaia hypothesis may be the key to our survival.

Gaia is the classical Greek word for earth.

The hypothesis was developed by Dr. James Lovelock, who worked for the American space programme searching for signs of lie on Mars.

He suggested the earth was one complex organism, with an underlying organisation between every species ans system on the planet.

The human race was only one of that organism, scientists said, and there was a chance the planet was already organising itself to counteract the greenhouse warming, pollution, deforestation and ozone depeltion, by effectively kicking the human race out, moving into a diferent state in which humanity could not survive.

Ecologist Dr. Warwick Fox, a national research fellow at the centre for environmental studies at the University of Tasmania said the planet’s geological, chemical and biological cycles were so closely linked that scientists had to view the system as a single organism.

Professor John Morton said it looked as if humanity was likely to fail.

“We have to as ourselves if Gaia will at last become impatient and restructure itself to survive, making one of its species, humanity, redundant”, he said.

Scientists warned that when the global system was disturbed, it reached a critical threshold after a time and took on a completely different state.

Dr. Fox said people saw this every day when they heated water.

“The water in the pot quietly gets hotter and hotter, and suddenly its temperature reaches a critical threshold.

“And you’ve got turbulence and big bubbles of air and the water is boiling.

“A very different state from when you put it into the pot.”

What worried scientists so much was that the human species had introduced many disturbances in the past century and there was no way of telling when the earth would reach its critical threshold and flip into a different state which might or might not include humans.

That’s the double-edged sword. We’re playing with fire if we muck around with a highly-ordered system. And we’ve already done a great deal of mucking around with this planet in the past century or so,” Dr. Fox said.

Scientists involved in biological and microbial research said their research was starting to yield proof the Gaia hypothesis was correct.

Michael Crofoot, a researcher and writer on microbial symbiosis said scientists agreed that virtually all land plants had a symbiotic relationship with the fungi attached to their roots.

These fungi fed water and nutrients into the root and the extent of this assistance had astonished forest scientists.

“Up to four years ago, carefully controlled experiments found plant communities share nitrogen and other nutrients through the mycorrhizal fungi attached to their roots,” Mr. Crofoot said.

“Someone pointed out that in that case, you could say the tree was an appendage of the fungi.

“That means the forest is in fact one living organism. It’s the best physical evidence we’ve got of the truth of the Gaia hypothesis. We’re being taught a most amazing lesson, one we could perhaps only have learned now, when we are on our deathbed,” he said.

Here is a documentary made by Teddy Goldsmith


Edward 'Teddy' Goldsmith, the grandfather of the modern environmental movement argues that the planetary crisis facing us today cannot be solved by further economic progress and technological innovation but only through the cooperative efforts of ordinary people guided by their faith in traditional wisdom


Part 2 - The Solution: people and planet

Publisher of the Ecologist Speaks About Biotechnology and Global Warming

Listen to the podcast HERE

And a discussion between Goldsmith and Jack Shallcrass. There are

6 parts to this discussion.