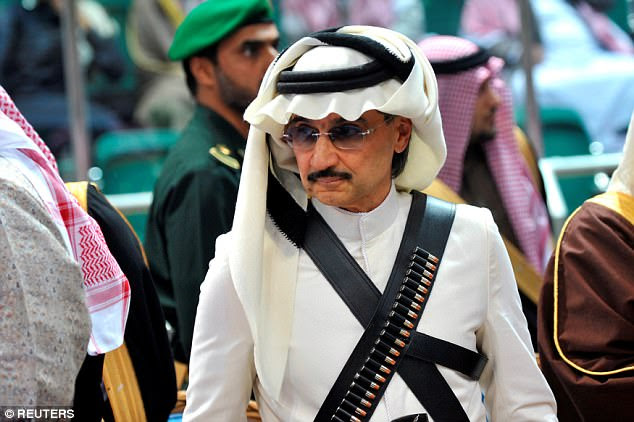 Crown Prince Mohammed bin Salman must be worried that some of the royals rounded up during his “corruption crackdown” cash grab are holding out on him. Because the Saudi prince has reportedly hired a crew of American mercenaries who haven’t hesitated to employ an array of “enhanced interrogation” techniques.

As the Daily Mail reports, mercenaries purportedly employed by Academi, a successor to infamous US security contractor Blackwater, have been stringing up some of MBS’s “guests” at the Riyadh Ritz Carlton by their feet and savagely beating them during interrogations. The claims have spread rapidly on Arabic-language social media, and even Lebanon’s president Michel Aoun has accused MbS of using mercenaries. Still, the Daily Mail isn't the most reputable news organization, so these reports should be taken with a grain of salt.


'They are beating them, torturing them, slapping them, insulting them. They want to break them down,' the source told DailyMail.com.

'Blackwater' has been named by DailyMail.com's source as the firm involved, and the claim of its presence in Saudi Arabia has also been made on Arabic social media, and by Lebanon's president.

The firm's successor, Academi, strongly denies even being in Saudi Arabia and says it does not engage in torture, which it is illegal for any U.S. citizen to commit anywhere in the world.


The Saudi crown prince, according to the source, has also confiscated more than $194 billion from the bank accounts and seized assets of those arrested, and could eventually end up with $800 billion in cash and assets to replenish Saudi’s rapidly diminishing reserves. Given the febrile atmosphere in the kingdom, and the tacit support for the crackdown among Saudi citizens, who have seen their jobs and generous government subsidies cut, MbS has been able to circumvent the country’s legal system.

He’s using mercenaries because, according to the Mail, Saudi soldiers might balk at torturing powerful men like Prince Alwaleed bin Talal, whom they’ve been saluting their entire lives. According to the Mail, Talal, who is (or was, until recently) one of the richest men in the world, has also been hung upside down and beaten.


'All the guards in charge are private security because MBS (Mohammed Bin Salman) doesn't want Saudi officers there who have been saluting those detainees all their lives,' said the source, who asked to remain anonymous.

'Outside the hotels where they are being detained you see the armored vehicles of the Saudi special forces. But inside, it's a private security company.

'They've transferred all the guys from Abu Dhabi. Now they are in charge of everything,' said the source.

The source said that Salman, often referred to by his initials MBS, is conducting some of the interrogations himself.

'When it's something big he asks them questions,' the source said.

'He speaks to them very nicely in the interrogation, and then he leaves the room, and the mercenaries go in. The prisoners are slapped, insulted, hung up, tortured.'

The source says the crown prince is desperate to assert his authority through fear and wants to uncover an alleged network of foreign officials who have taken bribes from Saudi princes.


The Daily Mail’s account of the treatment of the Saudi royals arrested in the crackdown is much more harrowing than anything the mainstream media has published. The Mail published photos of what appear to be some of the detainees sleeping on thin mattresses in the ballroom of the Ritz-Carlton.


Among those arrested on allegations of corruption is Prince Alwaleed Bin Talal, the Saudi King's nephew who is worth more than $17bn according to Forbes, and owns stakes in Twitter, Lyft and Citigroup.

DailyMail.com's source claims the crown prince lulled Alwaleed into a false sense of security, inviting him to a meeting at his Al Yamamah palace, then sent officers to arrest him the night before the meeting.

'Suddenly at 2.45am all his guards were disarmed, the royal guards of MBS storm in,' said the source.

'He's dragged from his own bedroom in his pajamas, handcuffed, put in the back of an SUV, and interrogated like a criminal.

'They hung them upside down, just to send a message.

'They told them that "we've made your charges public, the world knows that you've been arrested on these charges.'"


Of course, it’s unlikely MbS, or the American mercenaries, will ever be prosecuted for their actions, either in Saudi Arabia or the US. It’s rumored that MbS’s aging father, King Salman, might soon abdicate, granting his son untrammeled power to run KSA as he sees fit.

In 2008 the Boston-born son of former Liberian President Charles Taylor was found guilty by a US court of horrific torture. The jury in Miami found Charles 'Chuckie' Taylor Jr. guilty on all eight counts brought against him, including allegations he and his cohorts tortured victims in Liberia by applying electric shocks to their genitals, burning them with hot irons and melting plastic and rubbing salt in their open wounds.


This is what the BBC has to say.