Arab League:Iran And "Terrorist" Hezbollah Must Be Stopped

As we head to war and I work with this material the signal the computer signal goes somewhere else before it travels frommy modem to my computer.

You will look in vain in mainstream media for any reflection of this. 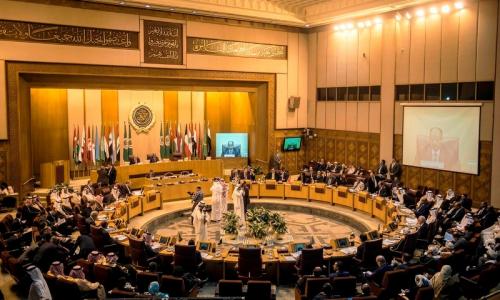 Saudi Arabia's foreign minister, in opening remarks to the Arab League today, declared that the kingdom “will not hesitate to defend its national security to keep its people safe” while requesting that joint action be taken to stop Iranian "aggression" and attacks on Arab states.


Last weekend Saudi Arabia called an emergency session of the Arab League to address what it labeled "Iranian interference" after the bizarre series of events related to MBS' aggressive internal purge, which included the detention of Lebanese ex-PM Hariri, left the kingdom in an unprecedented state of strife and uncertainty.  The destabilizing events were precipitated by a November 4 attack claimed by Shiite Huthi rebels in Yemen, which the Saudis called a "violation" committed by Iran, though Iran denied that it had anything to do with the rare ballistic missile launch out of Yemen.

Arab foreign ministers from member states met at League headquarters in Cairo on Sunday and in predictable fashion blasted Iran and Hezbollah for sowing instability and discord within Arab countries, citing Iranian "aggression" and expanding influence. The meeting is only the 12th such emergency summit to be held since the Arab League's founding in 1945 - a fact which hints at Saudi Arabia's increased desperation to confront Hezbollah while also shifting blame from its own self-made crisis at home.

The extraordinary session was also urged by close allies among the Gulf Cooperation Council (GCC) - UAE, Bahrain, and Kuwait - all of which also backed the Saudi diplomatic and economic war against Qatar which erupted early last summer. Among the many Saudi charges against Qatar is included supposed Iranian infiltration of the tiny oil-rich nation.
According to Bloomberg, Arab League head Ahmed Aboul Gheit said in a press conference carried on al-Arabiya that a resolutionreferred to Hezbollah as a "terrorist organization". Furthermore, he said that though the Arab league won’t declare war against Iran at the moment, the resolution is a clear condemnation of Iranian interference in the region.

In addition, Hossam Zaki, Arab League Assistant Secretary, struck a hardline tone when he told Asharq al Awsat newspaper, "What Iran is doing against some Arab countries calls for taking more than one measure to stop these violations, interferences and threats, which are carried out through many various means."

Much of Sunday's meeting focused on Lebanon, with Bahrain's foreign minister announcing that the country has come under the "total control" of Iran-backed Hezbollah. "The Lebanese Republic, in spite of our relations with it as a brotherly Arab nation... is under the total control of this terrorist party," said Bahraini FM Sheikh Khalid bin Ahmed Al-Khalifa, in reference to Hezbollah. "Iran's biggest arm in the region at the moment is the terrorist Hezbollah arm," he charged further. Bahrain recently joined Saudi Arabia in ordering its citizens out of Lebanon in what could be early signs of a looming regional war.

Of course, there was not even a hint of Arab League condemnation of Saudi Arabia effectively kidnapping Lebanese Prime Minister Saad Hariri, who is currently in an awkward state of limbo - or an exile of sorts - in Paris at the invitation of France's President Emmanuel Macron, though Hariri is vowing to return to Beirut this week.

As many astute pundits have pointed out, it's now "blame Iran time" according to the official Saudi (and allies) narrative of events in order to set the stage for public support for potential military action against Iran. Though it's unlikely that the Gulf states would take direct military action against Hezbollah and Iran, there could be efforts underway to give political backing for an Israeli incursion into Lebanon.

Meanwhile the Lebanese are increasingly aware that their country has fallen in the cross hairs of an unusual alliance between Saudi Arabia, Israel, and anti-Iranian interests which see Hezbollah and pro-Iranian proxies as the number one threat and scapegoat for all of the region's problems. Lebanese President Michel Aoun has accused Saudi Arabia of effectively kidnapping Hariri and holding him hostage, though Hariri himself has since given bizarre excuses for his prolonged absence.

As discussed previously, Iran is currently being scapegoated for just about all tensions which have exploded in the gulf over the past month, including the following growing list of grievances:
It may not come immediately, but there could be war on the horizon as Saudi Arabia and its regional allies grow increasingly desperate for "action" against Iran and Hezbollah.

Posted by seemorerocks at 12:24