Factually-correct, this article is extremely intellectually dishonest. All the evidence (especially on global dimming) comes DIRECTLY from Prof. Guy McPherson which is produced without acknowledgement or citation.

Consequently, I am not acknowledging tha author of this piece.

No doubt he will attack Guy at the first opportunity after having used his work.

Are we headed for near-term human extinction?
Recent studies suggest it is irresponsible to rule out the possibility after last week's "warning to humanity" from more than 15,000 climate change scientists 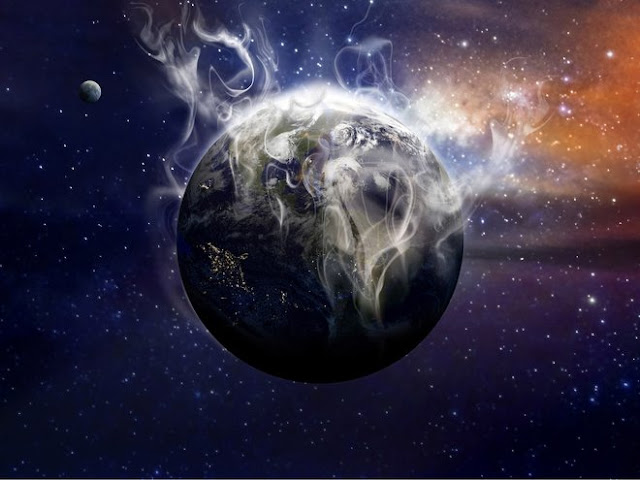 A “warning to humanity” raising the spectre “of potentially catastrophic climate change... from burning fossil fuels, deforestation and agricultural production – particularly from farming ruminants for meat consumption,” was published in the journal BioScience last week.

More than 15,000 scientists from 184 countries endorsed the caution, which comes on the 25th anniversary of a letter released by the Union of Concerned Scientists in 1992, advising that “a great change in our stewardship of the earth and the life on it is required, if vast human misery is to be avoided.”
A quarter century on, what gets lost in the dichotomy between climate change believers and deniers is that inaction and avoidance in our daily lives are forms of denial, too.
And what most of us are collectively denying is the mounting evidence that points to a worst-case scenario unfolding of near-term human extinction.
Exponential climate change
In 2015, 195 countries signed the Paris Climate Agreement to limit the rise in global temperature to below 2 degrees Celsius to avoid dangerous climate change. But none of the major industrialized countries that signed the agreement are currently on track to meet the non-binding targets. The Trump administration has indicated the United States will withdraw from the agreement entirely.
In July, a study in the peer-reviewed journal, Proceedings Of The National Academy Of Sciences Of The United States Of America, claimed “biological annihilation via the ongoing sixth mass extinction” is underway. And that “all signs point to ever more powerful assaults on biodiversity in the next two decades, painting a dismal picture of the future of life, including human life,” the study states.
According to scientists, the majority of previous mass extinctions in the geologic record were characterized by abrupt warming between 6 to 7 degrees Celsius. As recently as 2009, British government scientists warned of a possible catastrophic 4 degrees Celsius global temperature increase by 2060.
As Howard Lee wrote in the Guardian in August, “Geologically fast build-up of greenhouse gas linked to warming, rising sea-levels, widespread oxygen-starved ocean dead zones and ocean acidification are fairly consistent across the mass extinction events, and those same symptoms are happening today as a result of human-driven climate change.”
Runaway climate change is non-linear. Shifts can be exponential, abrupt and massive due to climate change “feedbacks,” which can amplify and diminish the effects of climate change. Here are five you need to know about:
1. Climate lag
Temperature increases lag by about a decade, according to NASA’s Earth Observatory. “Just as a speeding car can take some time to stop after the driver hits the brakes, the earth’s climate systems may take a while to reflect the change in its energy balance.”
According to a NASA-led study released in July 2016, “Almost one-fifth of the global warming that has occurred in the past 150 years has been missed by historical records due to quirks in how temperatures were recorded.”
Adding the climate lag to the current level of global temperature increase would take us past the 2 degree Paris Agreement climate target within a decade.
2. Ice-free Arctic
Dr. Peter Wadhams of the Polar Ocean Physics Group at Cambridge University told The Independent more than a year ago that the central part of the Arctic and the North Pole could be ice-free within one to two years.
Not only will melting Arctic sea ice raise global sea levels, it will also allow the earth to absorb more heat from the sun because ice reflects the sun’s rays while blue open water absorbs it.
One study in the Proceedings Of The National Academy Of Sciences Of The United States Of America estimates the extra heat absorbed by the dark waters of the Arctic in summer would add the equivalent of another 25 per cent to global greenhouse gas emissions.
3. The 50 gigaton methane “burp”
Dr. Natalia Shakhova, of the University of Alaska Fairbanks’ International Arctic Research Center has warned that a 50-gigaton burp, or “pulse,” of methane from thawing Arctic permafrost beneath the East Siberian Arctic Shelf is “highly possible at any time.”
Methane is a greenhouse gas much more potent than carbon dioxide. A 50 gigaton burp would be the equivalent of roughly two-thirds of the total carbon dioxide released since the beginning of the industrial era.
4. Accelerated ocean acidification
The world’s oceans are carbon sinks that sequester a third of the carbon dioxide released into the atmosphere. The carbon dioxide emitted in addition to that which is produced naturally has changed the chemistry of seawater. The carbon in the oceans converts into carbonic acid, which lowers pH levels and makes the water acidic.
As of 2010, the global population of phytoplankton, the microscopic organisms that form the basis of the ocean’s food web, has fallen by about 40 per cent since 1950. Phytoplankton also absorb carbon dioxide and produce half of the world’s oxygen output.
The accelerating loss of ocean biodiversity and continued overfishing may result in a collapse of all species of wild seafood by 2048, according to a 2006 study published in the journal Science.
5. From global warming to global dimming
The Canadian government recently announced plans to phase out coal-fired electricity generation by 2030. But at the same time as warming the planet, pollution from coal power plants, airplanes and other sources of industrial soot, aerosols and sulfates are artificially cooling the planet by filling the atmosphere with reflective particles, a process known as global dimming.
Airplanes, for example, release condensation trails (or contrails) that form cloud cover that reflects the sun. The effects of global dimming are best evidenced by a 2 degree Celsius temperature increase in North America after all commercial flights were grounded for three days following the attacks of 9/11.
The take-away
Out of control climate change means feedback mechanisms may accelerate beyond any capacity of human control. The occurrences  discussed in this article are five of some 60 known weather-related phenomenon, which can lead to what climate scientist James Hansen has termed the “Venus Syndrome,” where oceans would boil and the surface temperature of earth could reach 462 degrees Celsius. Along the way humans could expect to die in resource wars, starvation due to food systems collapse or lethal heat exposure.
Given all that remains unknown and what is at stake with climate change, is it irresponsible to rule out the possibility of human extinction in the coming decades or sooner?