A censored article on the origins of Russiagate

On the origins of Russiagate 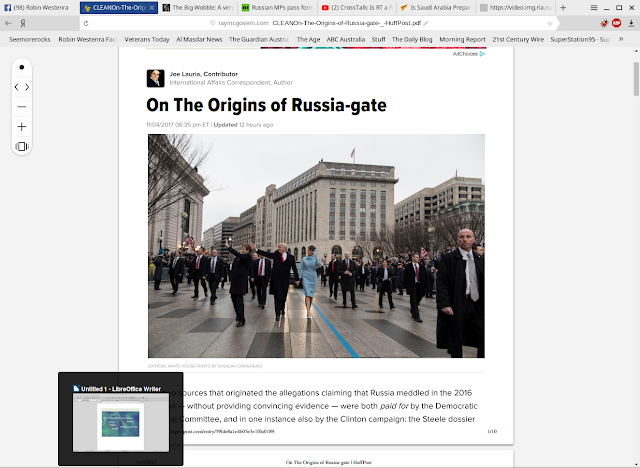 This article by Joe Lauria was pulled by the Huffington Post and disappeared but not before it could be recorded as a .pdf HERE


Tell the HuffPost to Restore My Censored Article

Why won't the "Russia hacked the election" narrative go away? Who's behind it and why? And how? Did you know that the only two sources for the claim that Russia hacked the DNC and Podesta's emails were BOTH being paid by the DNC? Is that not a conflict? Beyond the politics, the new Cold War is a dangerous development. We are joined by investigative journalist Joe Lauria to understand the basic facts behind the claims...

As a longtime contributor to the Huffington Post I posted an article about Russia-gate to the site on November 4. Within 24 hours it was retracted. I have never heard from Huffington Posteditors about this decision. As a reporter for mainstream media for more than two decades, including almost seven years at theWall Street Journal, six years at the Boston Globe and ten years for the Sunday Times of London, I know that a newsroom rule is that before an article is retracted the writer is contacted to be allowed to defend her or his work. This never happened. There was no due process. An email I wrote to a HuffPost editor asking why it was retracted was ignored.  I can now only conclude that the decision was not for editorial, but for political reasons.
Like the word fascism, censorship is over-used and mis-used, and I avoid using it. But I can come to no other conclusion than that this is an act of political censorship. I am non-partisan as I oppose both major parties. I am a reporter who follows the facts where they lead. And they lead to an understanding that the Jan. 6 intelligence “assessment” on alleged Russian interference in the election was based on opposition research, not serious intelligence work.
I captured a pdf of the censored article here:http://raymcgovern.com/wp-content/uploads/2017/11/CLEANOn-The-Origins-of-Russia-gate-_-HuffPost.pdf
I've received a lot of support since the censorship became known. Ron Paul interviewed me about it on his TV show, The Liberty Report.  Journalists Tariq Ali, Max Blumenthal, Margaret Kimberley, Sam Husseini and Pepe Escobar have shared it on social media. Pepe said I "killed" the story. Peter Lavelle, host ofCrossTalk, asked me about it on the show. ZeroHedge wrote a widely-read piece about it, Mike Whitney referenced it onCounterPunch, and former CIA-analyst Ray McGovern kicked it