“Based on the junk commentary of some drone who used to work for Lehman Bros., ground zero for the GFC). Next week, a Robert Mugabe staffer on why democarcy will suffer under the coalition agreement)"

Before the election it was the “rockstar economy” Now an expert has been pulled out to call for collapse.

All on Labour coalition government (sic). 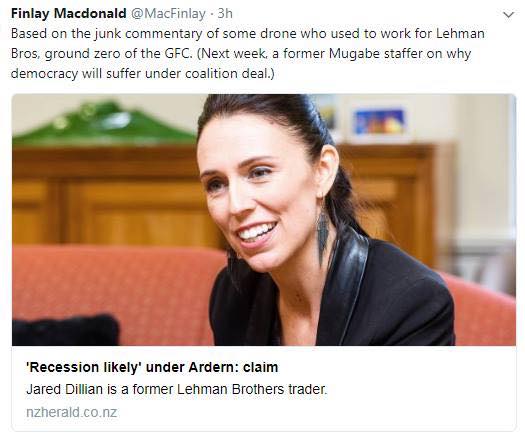 The National Party has seized on an opinion piece published on the Forbes website that warns of a likely recession under Jacinda Ardern's leadership.

"It seems likely that New Zealand will experience a recession during Ardern's term. Nobody is predicting a return to the bad old days of the 70s, but New Zealand will probably lose its status as one of the most open, free economies of the world.

The article has been shared by the National Party on social media.

It is the second recent comment piece published by an overseas media organisation to be critical of the new Labour-led Government.