The Defeat pf ISIS in the Middle East

Putin-Assad Meeting Cements the End of US Dominance in the Middle East
Whatever happens after this the U.S. has lost all credibility in the region outside of Riyadh and Tel Aviv 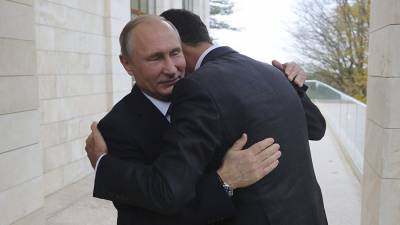 I’m not a terribly religious man.  But, I’d like to believe there is a special corner in Hell reserved for those that fomented the Syrian Civil War.


From its beginnings in Libya with gun-funneling through the U.S. embassy in Benghazi to yesterday’s meeting between Russian President Vladimir Putin and Syrian President Bashar al-Assad, this entire affair will be remembered as one of the most cynical and abusive periods of history.
The Syrian ‘Civil War’ was meant to be the crowning achievement of U.S./Israeli/Saudi policy in the Middle East, the apotheosis of neoconservatism.
Had it succeeded it would have transformed the world into a living hell governed by the likes of Hillary Clinton, George Soros, Angela Merkel and the U.S./U.K. banking cartel.

Syria was to be the wedge that blew open not only the Middle East but Central Asia as well.  It would stop the resurgence of Russia as a world power, subjugate Europe to an endless nightmare of forced cultural assimilation and completed bankrupting the United States to bring it in line with the a failing European integration project.

Supranational treaties like the TPP, TTIP and the Paris Accord were designed to create a superstructure that would supplant national sovereignty without any input from the people who were most affected by it.
Putin’s Turning Point
With Vladimir Putin’s pivotal speech at the United Nations on September 28th, 2015, opposition to this vision was expressed in the most forceful, and frankly, humanist terms one could imagine.  I’m going to remind you of the most important passage as it relates to Syria.

In these circumstances, it is hypocritical and irresponsible to make loud declarations about the threat of international terrorism while turning a blind eye to the channels of financing and supporting terrorists, including the process of trafficking and illicit trade in oil and arms. It would be equally irresponsible to try to manipulate extremist groups and place them at one’s service in order to achieve one’s own political goals in the hope of later dealing with them or, in other words, liquidating them.

To those who do so, I would like to say — dear sirs, no doubt you are dealing with rough and cruel people, but they’re in no way primitive or silly. They are just as clever as you are, and you never know who is manipulating whom. And the recent data on arms transferred to this most moderate opposition is the best proof of it.

We believe that any attempts to play games with terrorists, let alone to arm them, are not just short-sighted, but fire hazardous (ph). This may result in the global terrorist threat increasing dramatically and engulfing new regions, especially given that Islamic State camps train militants from many countries, including the European countries.

In truth, the whole speech is worth revisiting.  It is a stark reminder that Putin, normally very reserved in his words, laid all of his cards on the table and directly accused the United States of declaring war on the world.
And within 48 hours Sukhois were flying over Syria, bombing targets opposed to Syria’s government, allowing one military victory after another for the beleaguered Syrian Arab Army.  Shortly thereafter a coalition formed around Assad’s government including Iran’s Republican Guard, Hezbollah’s military wing and China’s tacit financial and moral support.
Putin told everyone, “Enough is enough” at the U.N. Then he backed up his words with actions.  War is always regrettable.  It is almost never justified.  But, when faced with an implacable enemy, there was little else to be done.
And I submit that the neoconservative forces driving the anti-Assad policy decisions are that implacable enemy.
The End of ‘Assad Must Go’

That action began the process of unraveling the carefully constructed narrative that was the Syrian Civil War.

But, enough history.
Yesterday Putin introduced Assad to the military commanders who are most responsible for the stabilization of his country.  Syria as a political unit has survived.
Saudi Arabia’s old guard are imprisoned, impoverished and losing influence around the world by the minute.  Israel’s neoconservative government, led by madman Benjamin Netanyahu, is fulminating impotently at the turn of events, and, of course, ISIS has all but been wiped out in both Syria and Iraq.
The U.S. continues to talk out of both sides of its mouth, allowing some ISIS members cover to escape to be used again another day, presumably against Iran and/or Lebanon, while taking credit for ISIS’s collapse and the capture of Raqqa.

This reflects the deep-seated issues within the vast U.S. diplomatic, military and intelligence communities and the difficulties President Trump is having bringing these disparate groups to heel while not appearing weak and ineffectual.
You need only look at the odd event over the weekend of military helicopters landing at the CIA’s headquarters at Quantico to know that, at a minimum, there is an internal war occurring within the U.S. government.
The best explanation I’ve heard (and this is by no means a corroborated fact) is that the U.S. military put on a show of force against Obama administration hold-overs in the CIA still operating its terrorist proxies in Syria.  And that these operations are in direct conflict with U.S. military goals there.
If that is the case then Putin is right to simply ignore the Americans and move policy talks forward at an accelerated rate, ignoring the talks in Geneva and giving Assad all the support he needs to continue on as Syria’s leader, if that is what the Syrian people want.
Given Assad’s open support of his military and the way the war against ISIS and other separatist groups was led by Syrian forces on the ground, there is little doubt that Assad will win that support in any upcoming elections.

The big question is, however, what price will be extracted from the U.S. for their part in all of this.  Putin will not put Trump in a bad position.  The loss of face for the U.S. has already occurred internationally.
The Obama administration’s complicity in this sorry chapter of Middle East history has been mostly laid base for anyone with eyes open enough to see.
Putin will offer Trump a way to save face for the U.S. while laying all the blame on Obama, Clinton, McCain and the rest of them.  If you don’t think this ties into Robert Mueller’s ‘Russia-Gate’ investigation run amok, you aren’t paying attention.
Mueller is trying to desperately save everyone implicated here from treason charges.  But, I expect, everything about the U.S. political scene is about to change radically.  Once Judge Roy Moore enters the Senate (the odds of that not happening are close to zero), Trump has an impeachment-proof majority in the House and the Senate and can shut down Mueller or get him to play ball.
Trump has the opportunity to play peace-maker here.  He can solidify his position as the handler of Saudi Arabia’s and Israel’s worst actors and keep them on a short leash.
In fact, one could make a credible argument that is what the purge in Saudi Arabia was all about.  Mohammed bin Salman’s counter-coup was done with Trump’s blessing.
Putin can act similarly to allay suspicions of Iran’s and Hezbollah’s intentions.  He can also restrain Assad from retaliating against his enemies, though rightly deserved, in order to build a lasting peace.  And once the talks are over and the threat of Kurdish independence is over, Turkey will withdraw its troops from Syria.
Putin is set to call Trump later today to update him on what comes next.  It’s obvious that the two have been in contact about how things are progressing in Syria.  And, Trump, for his part has smartly left the clean-up work to Putin while he deals with his domestic neoconservative problems.
Whatever happens after this — framework for long-term peace or an uneasy ceasefire with Russia playing the go-between for the time being — the U.S. has lost all credibility in the region outside of Riyadh and Tel Aviv.
And we have no one to blame except ourselves.
Source: Gold, Goats and Guns