Shutting down the debate in the West

CrossTalk: Is RT a Foreign Agent?

According to the Department of Justice RT – the channel you are watching now – is an agent of a foreign, even hostile power. All the while the DOJ refuses to explain why this is the case or even cite what laws we may have broken. But something else is in play: Critics warn RT is a test case for a wider campaign of media suppression. 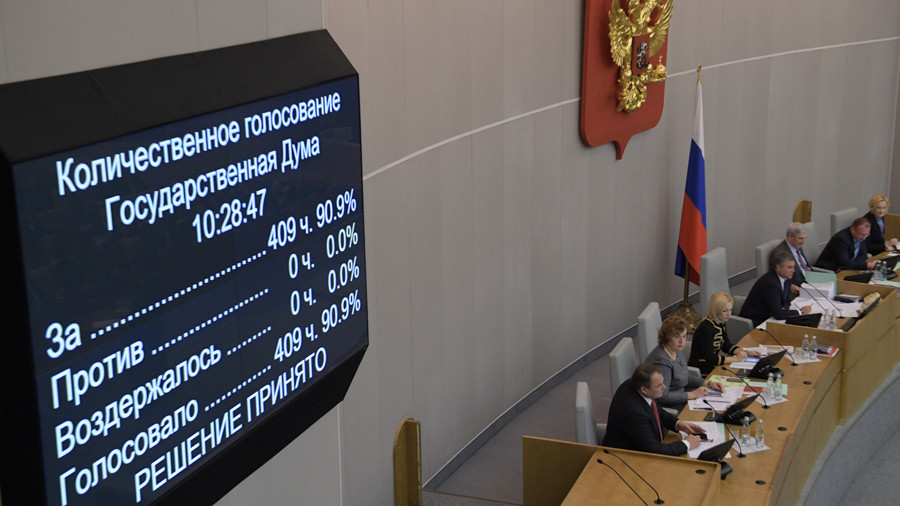 
Russian State Duma on Wednesday passed in the third and final reading the bill require mass-media outlets operating in the country but funded from abroad to register as foreign agents.

The motion was prepared by State Duma Speaker Vyacheslav Volodin and the heads of all four parliamentary caucuses. It was drafted as a suite of amendments to the bill, allowing for websites of banned or extremist organizations to be blocked without requiring approval from the courts.


The text of the amendment defines affected mass-media outlets as legal entities that are “registered in a foreign nation, or a foreign structure that operates without registering as a company, engaged in spreading printed, audio, audio-visual or any other content prepared for an unlimited group of people.”


It states that such entities can be “recognized as foreign mass media executing the functions of a foreign agent if they receive monetary funds or other property from foreign states, government agencies, foreign-based and international organizations, foreign citizens and persons without citizenship or any other persons acting on behalf of foreign citizens and organizations,” according to TASS.


The bill does not mention any particular companies or countries. It specifies that the final decision in classifying mass media outlets as foreign agents should be made by the Justice Ministry. The ministry is also tasked with developing instructions regarding the obligatory marking of products released by mass-media outlets registered as foreign agents, and deciding whether it is necessary to maintain a separate register of such organizations.


Media outlets that refuse to register as foreign agents would face sanctions similar to those applied to NGOs and other groups, which are currently regulated by the original foreign-agents law.

One of the key sponsors of the new bill, Deputy Duma Speaker Pyotr Tolstoy (United Russia) called the motion “a forced decision that would not affect the freedom of speech in any way.”


“We are talking about an opportunity for the executive-power bodies to take mirror measures against countries that are infringing upon Russian journalists’ freedom of action and expression,” RIA Novosti quoted Tolstoy as saying.


Vladimir Putin’s press secretary, Dmitry Peskov, approved of the newly passed bill on Wednesday. “Any attempts to attack the freedom of Russian mass media abroad are not and will not be left without resolute denunciation and a mirror reaction from Moscow. The approved bill will make it possible to express our reaction in due time,” he said.


Russian lawmakers began to draft the legislative measures after the US Department of Justice ordered RT America to register as a foreign agent before November 13, threatening to freeze the company’s assets and arrest its head if it did not comply. On November 10, RT America (officially registered as T & R Productions LLC) filed as a foreign agent with the US Department of Justice.

The original Russian Foreign Agents Law, introduced in late 2012, obliges all NGOs that receive funding from abroad and are engaged in political activities to register as foreign agents or risk substantial fines. In November 2014, the law was expanded by a bill making it illegal for Russian political parties to receive sponsorship from, or enter into any business deals with, NGOs that have “foreign-agent” status.


Many rights groups in Russia and abroad protested against the move, saying it would jeopardize their existence, and complained about ‘loose definitions’ in the original document. In mid-2016, President Vladimir Putin signed a bill into law that defined the term “political activity of non-governmental organizations” and exempted charity groups receiving funding from abroad from having to register as foreign agents.
Posted by seemorerocks at 16:22