Nasrallah Accuses US Of "Daesh Conspiracy"


Washington's past decade of Syria policy has been driven by fears of the so-called "Shia crescent" or Iranian land bridge which would conceivably connect Tehran with the Mediterranean in a continuous arch of influence. With events rapidly unfolding in Iraq and Syria, foremost among them the defeat of ISIS and the connection of Syrian and Iraqi national forces at the shared border, that land bridge has now been established for the first time in recent history.

Plans to undermine the Syrian government were manifest as early as the mid-2000's, when Damascus was put on notice by the US that "you are next" after the 2003 invasion of Iraq.

Indeed, this was so well-known and openly talked about in diplomatic circles that CNN's Christian Amanpour directly informed Assad on camera that he was being targeted for regime change in a 2005 interview. She told him, "Mr. President, you know the rhetoric of regime change is headed towards you, from the United States. They are actively looking for a new Syrian leader. They are granting visas and visit to Syrian opposition politicians. They're talking about isolating you, diplomatically, then perhaps a coup d'etat or your regime crumbling."

The geopolitics driving the current Middle East war were framed and set in motion under the Bush administration, as Seymour Hersh reported in 2007: 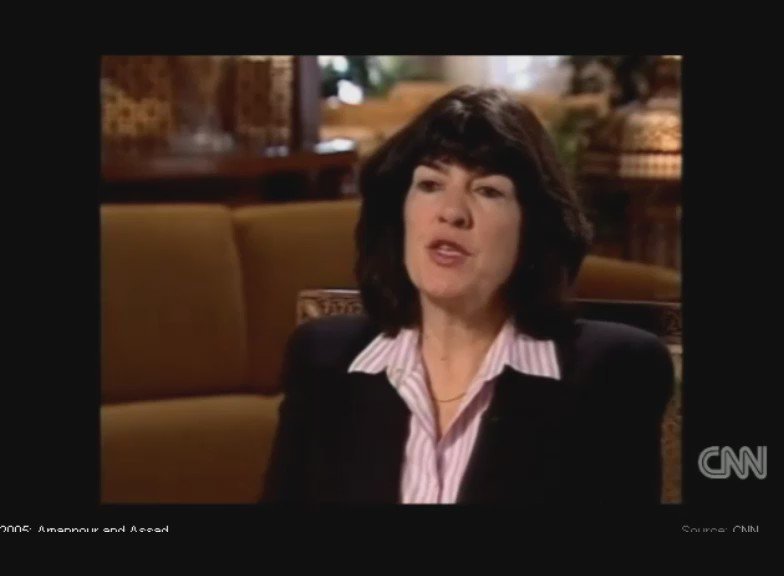 
To undermine Iran, which is predominantly Shiite, the Bush Administration has decided, in effect, to reconfigure its priorities in the Middle East. In Lebanon, the Administration has cooperated with Saudi Arabia’s government, which is Sunni, in clandestine operations that are intended to weaken Hezbollah, the Shiite organization that is backed by Iran. The U.S. has also taken part in clandestine operations aimed at Iran and its ally Syria. A by-product of these activities has been the bolstering of Sunni extremist groups that espouse a militant vision of Islam and are hostile to America and sympathetic to Al Qaeda.

But now as 2017 comes to a close, the Syria-Hezbollah-Iran alliance appears victorious, and it's the House of Saud and US-backed alliance that is fragmented and in shambles. And consistent with what Hersh predicted all the way back in 2007, the US has for years supported a jihadist corridor in Syria in order to "isolate the Syrian regime, which is considered the strategic depth of the Shia expansion (Iraq and Iran)."

This week Hezbollah's Secretary-General Hassan Nasrallah has once again accused the United States and its allies in Syria of aiding ISIS. In televised remarks on Monday related to the recent fight for Albu Kamal, Nasrallah said, “The US helped Daesh as much as it could in Albu Kamal short of directly engaging forces that fought to liberate the town from Daesh.” He further accused the US of giving air cover to ISIS terrorists in Syria's east, as well as facilitating their escape from advancing Syrian army forces.

But what is the truth behind what Nasrallah calls "the Daesh conspiracy"? The current geopolitics of the Syrian battlefield, and US policy and interests east of the Euphrates, in reality gives the US military every incentive to pressure the Syrian Army while at the same time allowing a Daesh escape - as even a recent bombshell BBC investigation confirmed. But to understand the intricacies of how US policy and strategy is playing out, it is important to chart the significance of the establishment of the historic "Iranian land bridge" which occurred this month.

Below is a dispatch authored and submitted by Elijah Magnier, Middle East based chief international war correspondent for Al Rai Media, who is currently on the ground in the region and has interviewed multiple officials involved in the conflict.

A US buffer zone in northeastern Syria and a land-bridge from Tehran to Beirut. Map source: Stratfor

Following the victory of the Syrian army and its allies over the “Islamic State” group in the town of Albu Kamal in the northeast of the country, the road has been opened for the first time since the declaration of the Islamic Republic of Iran in 1979 between Tehran, Baghdad, Damascus and Beirut and become safe and non-hostile to the four capitals and their rulers.

The United States tried to block the road between Tehran and Beirut at the level of Albu Kamal by forcing the Kurdish forces into a frantic race, but Washington failed to achieve its goals.

The Syrian Army along with allied forces (the Lebanese Hezbollah, the Iranian Revolutionary Guards and the Iraqi Harakat al-Nujaba’) liberated the city, opening the border with Iraq at al-Qa’im crossing. ISIS militants fled to the Iraqi al-Anbar desert and east of the Euphrates River where US and Kurdish forces are operating.

Thus, the US is establishing a new undeclared no-fly-zone without bothering to deny that this can serve ISIS forces east of the Euphrates and offer the terrorists a kind of protection. Moreover, the US-led international coalition air bombing against ISIS has reduced noticeably.

Walid@walid970721
#Nasrallah: How ironic it is that at the very moment #Hezbollahand the Iranians were participating in the expulsion of ISIS from#Albukamal in #Syria, the Arab Foreign ministers declared Hezbollah as a terrorist organization & #Iran as a sponsor of terrorism pic.twitter.com/v0UFDxEnSk

Walid‏ @walid970721
#Nasrallah: Daesh used coordinates provided by US drones when shelling forces attacking #AlBukamal. US jammed electronic frequencies of forces fighting Daesh. After the defeat, US facilitated evacuation of Daesh forces to SDF areas east of Euphrates #Syria
The media could not be played.
12:58 PM - 22 Nov 2017

With this US warning, it is clear that Washington is declaring the presence of an occupying force in Syria, particularly as the presence of the coalition was linked to fighting ISIS as previously announced. Today ISIS has lost all cities under its occupation since July 2014 in Iraq and before this date in Syria. Therefore there is no legal reason for the presence of the US forces in the Levant.

By becoming an occupation force, the US troops expose themselves, along with the proxy Kurds operating under its command, to attacks similar to the one in Iraq and the one in Lebanon in 1982 during the Israeli invasion.

The United States will no longer be able to block the Iraqi-Syrian road (Al-Qaim-Albu Kamal) because it is related to the sovereignty of the two countries. But this does not mean Tehran will use this route to send weapons across Baghdad and Damascus to Hezbollah in Lebanon, for two reasons: First, Iraq has sovereignty and the Prime Minister Haider Abadi will not allow any Iraqi armed party to keep its weapons because the Iraqi armed forces are responsible for holding security, especially after the defeat of ISIS in all cities. Abadi’s next step will be to disarm all Iraqi movements and organizations by the year 2018 and most likely after the forthcoming elections in May. According to well-informed sources Iran and the Marjaiya in Najaf (and the majority of the Iraqi parties) want Abadi to be re-elected for another term.

This means that Iraq will not allow its territory to be used to finance non-state actors, even if these have taken part in the elimination of ISIS. Neither will Abadi allow weapons to cross his country to an ally that fought alongside the Iraqi forces – such as Hezbollah – because he is not positioning himself against the United States and the countries of the region. This is not Iraq’s battle.
Secondly, Hezbollah does not need the land route from Tehran to Beirut because the sea and air links with Tehran are open through Syria and from it to Lebanon. Moreover, Hezbollah is no longer in need of additional weapons in Lebanon, especially since the Lebanese-Syrian front is unified against any possible future Israeli war.

As for Syria, the preparations for starting the challenging and complex rounds of negotiation to open the way for political talks which have begun in Sochi, Russia. Naturally, these talks are difficult because the United States has demands, as does Turkey, which has shown its intention to stay for a very long in the north of Syria.

In this context, Syrian President Bashar al-Assad is ready to prepare for a new constitution, on which work began several months ago. Syrian and international human rights experts and law specialists have been discussing with various groups how to establish new constitutional foundations for Syria, aiming to invite the numerous anti-Damascus parties to lay down their arms and join in the negotiations for the future of Syria.


The only problem remains with al-Qaeda in Bilad al-Sham, and the thousands of foreign fighters in Idlib, waiting for the results of the Turkish-Syrian negotiation. The war was long and complex, mainly because of shifting alliances. But the peace will be no less complex to construct if future wars based on revenge and a greedy desire for territory are to be avoided.