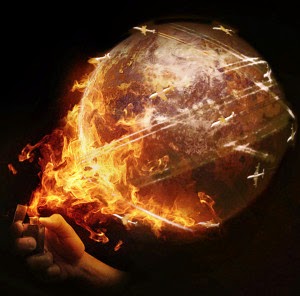 In his presentation in Konstanz, Germany Guy McPherson evoked this film, specifically to illustrate his point that a sudden reduction of particulates in the atmosphere that would come from the collapse of industrial activity in the world would lead to an abrupt increase in global temperature.

For me there was more than this in the movie. I first saw this with friends at about the time of the collapse of climate talks at COP15 in Copenhagen in 2009, when any hope of global action on reducing greenhouse gasses went under the bus.

It also introduced me to the human predicament regarding climate change and action to reduce greenhouse gases. More imзortantly it was the first mention I heard of the possibility of rapid climate change, of positive, self-reinforcing feedbacks, and, in particular the release of methane from the world's oceans that would come as a result of destabilisation of clathrates.

This documentary had an electric effect on me and left an impression that lay dormant until I heard what Guy McPherson (and through him, the scientists of AMEG) was saying.

It talked about about the discovery, by several scientists independently, of a phenomenon that came to be called global dimming - the reduction of light from the sun reaching the earth's surface by about 10 percent and reduction in the pan evaporation rate, and how scientists discovered that this dimming was caused by particulates or soot particles in the atmosphere that stopped light from reaching the surface and reflected this back into space.

Further research showed that this had had an effect on the climate of the earth, particularly on the monsoon, causing the catastrophic famine in the Horn of Africa during the 1970's and 1980's.

It showed that attempts to reverse  air pollution and phenomena such as acid rain had been largely successful and this had reduced the levels of sulfates etc. in the air that cause visible pollution while doing nothing to reduce invisible pollution caused by greenhouse gases such as CO2.

9/11 provided the first clues as to what could happen with a reduction in pollution. When aircraft  stopped flying for the three days after 9/11 and there were no contrails scientists found that there was a sudden 1C increase in temperatures.

Pollution had had the effect of hiding the effects of greenhouse gases for some time. Take away the pollution and the result is runaway warming.

Although it doesn't mention geoengineering once in the whole program there is a cautionary tale for those that simplistically advocate geoengineering techniques to cool the Arctic to give a 'breathing space'.  It demonstrates the unintended, and disastrous effects of global dimming and implies the ethical question: is it permissible to commit what would amount to an act of genocide in one part of the world (read, the poor countries of the south) to help people in other parts of the world (read, the rich, industrialised world).

I wouldn't mind wagering that the effects of global dimming would be only temporary. Stop polluting and you will get the rapid warming effects described in the documentary.

The truly horrendous thing for me, rewatching "Global Dimming" is to realise that we are already seeing the beginning of the scenario that the film makers foresaw would happen over the next century.

The world is warming at a rate that no one could have foreseen, even by the makers of this documentary,

We are indeed, looking down the barrel of the near-term extinction of homo sapiens within one lifetime