It is ANZAC days and the 100th avviversary of Gallipoli.

Here are some apt words from Kevin Hester:

In 1986 I was invited to the official NZ delegation at Gallipoli.When I saw the names on the memorials for the colonial troops were all working class and was almost exclusively non commissioned officers and enlisted men I bailed and refused to attend in anger .

The next day I was in Istanbul when Chernobyl blew up and I got nuked.

All wars are banker and resource wars and now Don't blame me I didn't vote for Tony Abbott in Australia and John Key is an idiot in NZ are lining up our countries to support the latest US banker war in Iraq.

2779 NZ troops died in Gallipoli for what?

Unmentioned in the great embedded video was that Kamal Attaturk's troops had to use watering cans on their machine guns as they ran red hot mowing down the Gurkas, Ozy's, Brits and Kiwis.

More British incompetence and mendacity with the complete history being rewritten by imperialist sycophants. 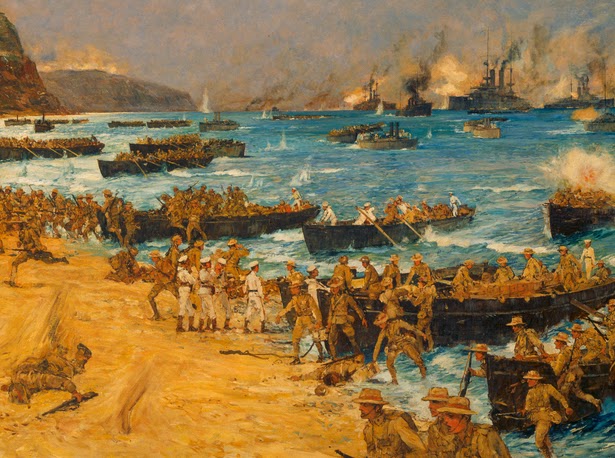 The idealised vision of the invasion of Gallipoli by imperial forces

25 April 2015 marks the hundredth anniversary of the start of the British-led military invasion of Gallipoli on Turkey’s Dardanelle Peninsula, which resulted in over 200,000 dead and wounded in an eight-month period.

Many of these were the First World War's first major casualties for the Australian and New Zealand Army Corps (Anzac).

Gallipoli was a military disaster. Yet, a century on, politicians seeking to glorify the First World War, are calling the huge loss of life at Gallipoli "a price worth paying."

As the Australian government is spending $300 million commemorating the WWI centenary to promote militarism and nationalist myths, veterans groups have condemned the "nationalist circus" that Anzac Day has become.

A key part of the UK government's WWI programme will include Anzac Day commemorations in London, Turkey and Portsmouth.

While Prime Minister David Cameron spends over £60 million to mark the WW1 centenary, mental health problems among UK soldiers back from the Iraq and Afghanistan wars, escalate, six veterans per day seek treatment for post-traumatic stress, as alcoholism, suicide and homelessness are on the rise.

Rather than celebrating the rewriting of history in order to promote new wars, on this 100th anniversary, it is important to remember what really happened at Gallipoli.

Gallipoli Lest We Forget … the facts

This is a must have for all those interested in Australians at war and how the Anzac legend was forged, and reflects on the impact Gallipoli had on everyday Australians then and now. It includes never-before seen interviews with the last ten Gallipoli Anzacs, includes rare black and white film footage showing the beach and the trenches at Gallipoli, rarely seen images from The Age and war photographer Phillip Schuler.