We are sure this is nothing to worry about... and Japanese officials will re-iterate that everything is on track but when a snake-like robot sent to inspect a reactor containment vessel at the Fukushima Daiichi nuclear power plant dies three hours into the operation, one might wonder just how "contained" the radiation situations really is.


The crippled reactors are inaccessible to humans because of deadly levels of radiation, so using the two-foot-long robot was the first chance officials were able to examine the damage caused by highly radioactive nuclear-fuel debris.

The robot has been developed by the International Research Institute for Nuclear Decommissioning (IRID) and Hitachi-GE Nuclear Energy to investigate hard-to-access areas of the plant. It consists of three segments: the robot's main body and two compact crawlers. The robot can assume a long, straight shape for passing through narrow spaces, such as pipes. Alternatively, it can rotate its crawlers by 90 degrees in relation to its central body to assume a U-shape, with the crawlers providing better stability when travelling over flat surfaces.

The robot is 9cm in height. Depending on the position of its crawlers, it is 25cm to 64cm in length and between 6.5cm and 27cm in width. Weighing 7.5kg, the robot is operated via a 40m cable.

"We believe this will lead us to figuring out how to decommission the reactor," Ryo Shimizu, spokesman for plant operator Tokyo Electric Power Company (TEPCO), told NBC News.

With the core still 'missing', Sputnik News reports that,


The robot sent to inspect a reactor' containment vessel at the Fukushima Daiichi nuclear power plant stopped responding three hours into the operation.

TEPCO hoped to take a look inside the vessel containing one of the three reactors, which underwent a meltdown in the 2011 nuclear disaster.

A group of approximately 40 workers sent the remotely-controlled device, allegedly capable of withstanding high levels of radiation, into the vessel at 11:20 a.m. The robot stopped functioning after covering two thirds of the route at approximately 2:10 p.m., according to the Tokyo Electric Power Co.

The company did not say whether it would send another robot into the vessel on Monday, as previously planned. TEPCO's ultimate goal is to use the robot to inspect the melted fuel inside the vessel. 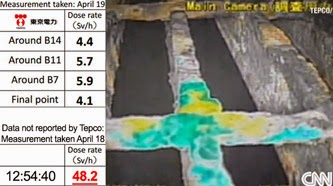 
Wall St Journal, Apr 20, 2015 (emphasis added):  Tepco to Abandon Second Robot Inside Fukushima Reactor… it has decided not to try to retrieve a second robot… citing radiation damage… [It] has now joined a previous robot which the utility also decided to leave there earlier this month… Tepco said one of the cameras used to monitor the second robot was damaged by the radiation. They decided to leave it inside to avoid the risk of it becoming stuck in a passageway…

NHK, Apr 20, 2015: The [first] robot was sent inside the vessel on April 10th but stopped working after advancing just 10 meters… TEPCO sent a second robot to retrieve the first robot. But the probe’s camera malfunctioned due to radiation exposure. The utility decided to abandon both robot probes.

Compare today’s media reports with Tepco’s most recent ‘prompt report’ on the second robot’s mission: “Radiation, Temperature Found Lower than Expected — Results so far indicate that the radiation dose was about 4.7 to 9.7Sv/h, less than a tenth of what was expected. That means the second robot can stay inside for about two to three days, rather than about 10 hours as originally planned.”

Jiji Press, Apr 20, 2015: [Tepco] said Monday it has given up attempts to recover a second shape-shifting robot… The electronics of the camera were apparently damaged by the high radiation in the PCV, the utility said. When powered up, the camera is designed to work for 10 hours in the intense radiation, but Tepco was unable to switch it on Saturday.

Also note the figures Tepco reported for the radiation dose (4.7 to 9.4 Sv/h). The company’s latest video shows the radiation dose spike to 48.2 Sv/h, by far the highest ever reported inside the Unit 1 containment vessel. Unfortunately, 16 seconds of the video was removed just as levels spiked from  3.7 Sv/h to 44.4 Sv/h.

Asahi Shimbun, Apr 19, 2015: Rust or peeling paint on a steel floor was visible in video footage taken by the second robot probe sent into one of the reactors.

Yomiuri Shimbun, Apr 18, 2015: Yellow, blue-green and other colors could be seen on the floor. “We have not been able to specify whether the colors were the effects of the robot’s lights or paint from equipment that melted…” said a TEPCO official.