Centenary of the Armenian massacre


This week marks the 100th anniversary of the Armenian genocide.

On April 24, 1915, the Young Turk government of the Ottoman Empire began a systematic, premeditated genocide against the Armenian people — an unarmed Christian minority living under Turkish rule. An estimated 1.5 million Armenians were exterminated through direct killing, starvation, torture and forced death marches. Another million fled into permanent exile.

Today, the Turkish government continues to deny this genocide, and since becoming president, President Obama has avoided using the term "genocide" to describe it.

We’re joined by Peter Balakian, professor of humanities at Colgate University and author of "The Burning Tigris: The Armenian Genocide and America’s Response"; Anahid Katchian, whose father was a survivor of the 1915 Armenian genocide; and Simon Maghakyan, an activist with Armenians of Colorado. We also play a recording of Armenian broadcaster and writer David Barsamian’s mother recalling her experience during the Armenian genocide as a young girl. Araxie Barsamian survived, but her parents and brothers did not.

Armenian genocide: To continue to deny the truth of this mass human cruelty is close to a criminal lie 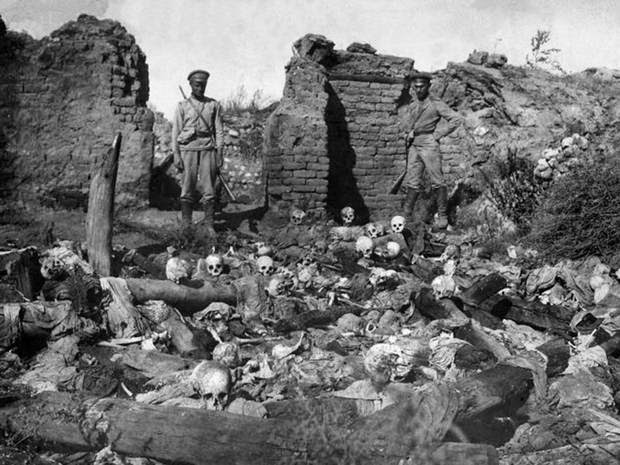 At seven o’clock on Thursday evening, a group of very brave men and women will gather in Taksim Square, in the centre of Istanbul, to stage an unprecedented and moving commemoration. The men and women will be both Turkish and Armenian, and they will be gathering together to remember the 1.5 million Christian Armenian men, women and children slaughtered by the Ottoman Turks in the 1915 genocide. That Armenian Holocaust – the direct precursor of the Jewish Holocaust – began 100 years ago this Thursday, only half a mile from Taksim, when the government of the time rounded up hundreds of Armenian intellectuals and writers from their homes and prepared them for death and the annihilation of their people.
The Pope has already annoyed the Turks by calling this wicked act – the most terrible massacre of the First World War – a genocide, which it was: the deliberate and planned attempt to liquidate a race of people. The Turkish government – but, thank God, not all the Turkish people – have maintained their petulant and childish denial of this fact of history on the grounds that the Armenians were not killed according to a plan (the old “chaos of war” nonsense), and that the word “genocide” was anyway coined only after the Second World War and thus cannot apply to them. On that basis, the First World War wasn’t the First World War because it wasn’t called the First World War at the time!

Two thoughts come to mind, then, on this centenary of the butchery, mass rape and child killing of 1915. The first is that for a powerful government of a strong – and courageous – European and Nato nation such as Turkey to continue to deny the truth of this mass human cruelty is close to a criminal lie. More than 100,000 Turks have discovered that they have Armenian grandmothers or great-grandmothers – the very women kidnapped, enslaved, raped or converted on the death marches from Anatolia into the northern Syrian desert – and Turkish historians themselves (alas, not enough of them) are now producing the most detailed documentary evidence of the sinister Talat Pasha’s extermination orders issued from what was then Constantinople.

Yet anyone who opposes the government’s denial of genocide is still vilified. For almost a quarter of a century, I have been receiving mail from Turks about my own writing on the genocide. It started when I dug the bones and skulls of massacred Armenians out of the Syrian desert with my own hands in 1992. A few correspondents wanted to express their support. Most letters were little short of pernicious. And I rather fear that the continued denial by the Turkish government could be as dangerous to Turkey as it is outrageous for the Armenian descendants of the dead. I remember an elderly Armenian lady describing to me how she saw Turkish militiamen piling living babies on top of each other and setting fire to them. Her mother told her that their cries were the sound of their souls going up to heaven. Isn’t this – and the enslavement of women – exactly what Isis is perpetrating against its ethnic enemies just across the Turkish border today? Denial is fraught with peril.

And let’s ask ourselves what would happen if the present German government was to claim that any demand to recognise the “events” of 1939-1945 – in which six million Jews were murdered – as a genocide was “Jewish propaganda” and “mutilating history and law”. Yet that was pretty much what the Turkish government said when the EU last week asked it to recognise the Armenian genocide. The EU, the foreign ministry said in Ankara, had succumbed to “Armenian propaganda” about the “events” of 1915, and was “mutilating history and law”. If Germany had adopted such unforgivable words about the Jewish Holocaust, you would not have been able to see through the Berlin exhaust fumes as the world’s ambassadors headed for the airport.

Yet the very day after the brave little commemoration scheduled for Taksim Square this week, the great and the good of the Western world will be gathering with Turkish leaders a few miles to the west of Istanbul to honour the dead of Gallipoli, Mustafa Kemal’s extraordinary – and brilliant – 1915 victory over the Allies in the First World War. How many of them will remember that among the Turkish heroes fighting for Turkey at Gallipoli was a certain Armenian Captain Torossian – whose own sister would soon die in the genocide?

I plan to report on the commemoration next week in the company of Turkish friends. But the second thought that comes to mind – and Armenian friends must forgive me – is that I’m not terribly interested in what the Armenians say and do on this 100th anniversary. I want to know what they plan to do on the day after the day of the 100th anniversary. The Armenian survivors – those who could remember – are now all dead. In about 30 years, Jews around the world will suffer the same deep sadness as their own last survivors disappear from the world of living testimony. But the dead live on, especially when their victimhood is denied – a curse that forces them to die again and again.

Armenians must surely now compile a list of the brave Turks who saved their lives during their people’s persecution. There is at least one provincial governor, and individual named Turkish soldiers and policemen, who risked their own lives to save Armenians at this gruesome moment in Turkish history. Recep Tayyip Erdogan, Turkey’s triumphalist prime minister, has spoken of his sorrow for the Armenians, while continuing to deny the genocide. Would he dare to refuse to sign an Armenian genocide book of commemoration listing the brave Turks who tried to save their nation’s honour at its darkest our?

I’ve been banging on about this idea to Armenians for years. I said the same to Armenians in Detroit last week. Honour the good Turks. Alas, everyone laps.


More from Robert Fisk about the history of the region.
Posted by seemorerocks at 19:33